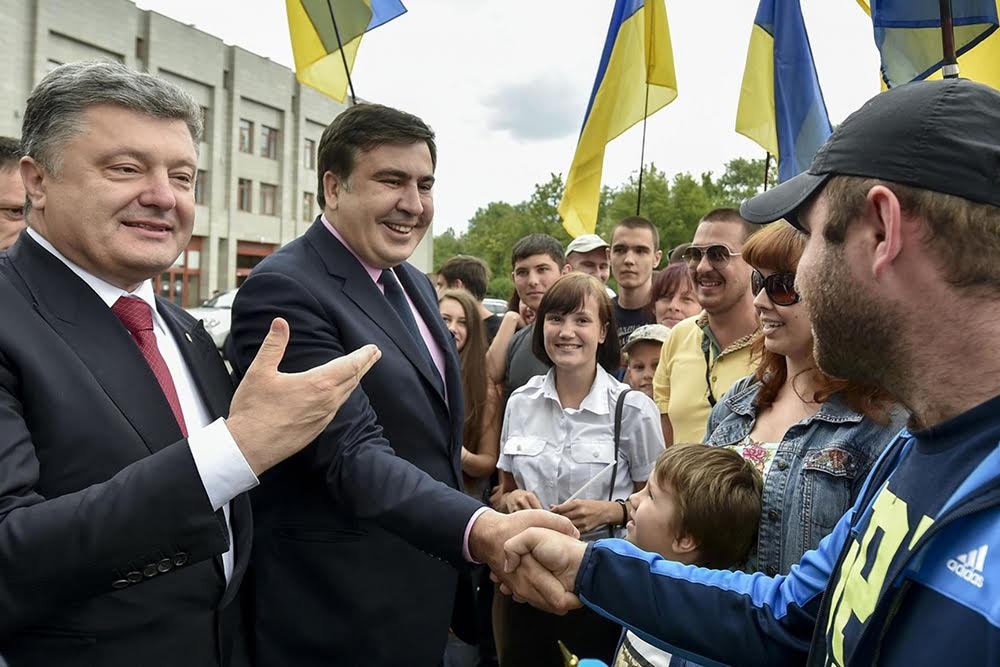 There was little doubt Mikheil Saakashvili had a second political act in him after leaving the presidency of Georgia in 2013. But few would have predicted he would be politically reborn as a governor of Ukraine’s Black Sea region of Odessa.

Expectations diverge broadly about what effect Saakashvili’s appointment will have on Odessa, a complex, problem-riddled area potentially vulnerable to Russian pressure.

Fixing Odessa, a bit bigger than the US state of Maryland, is seen as vital to keeping the embattled country together and on a Westernizing track. Giving that responsibility to Saakashvili, who enjoys a reputation both as a successful reformer and a loose cannon, is also viewed as Ukrainian President Petro Poroshenko’s most controversial move yet.

Three days into his new job, the former Georgian leader has remained uncharacteristically restrained about his plans. As he did in Georgia, he intends to slash government staff and hire more young people, stamp out corruption and upgrade infrastructure. But he has provided no specifics.

Ultimately, Saakashvili’s success or failure could influence Poroshenko’s own position in the region, a largely Russophone area with a complex ethnic mix. (Forty-nine-year-old Poroshenko himself was born in the Odessan town of Bohlrad.)

“They will try to turn this region into a showcase of positive changes,” predicted political analyst Yevgeniy Magda, director of the Center for Public Affairs, a Kyiv-based think-tank. “The price of these changes is high, as Poroshenko’s reputation as a reformer is on the line.”

Growing popular hostility appears to be aimed at Poroshenko and his administration for its inability to date to curb rampant corruption, boost the economy or knock oligarchs off their perches. “We elected an oligarch to solve a problem caused by oligarchs,” shrugged Volodymyr Danylenko, a shopkeeper in Kyiv, in reference to President Poroshenko, founder of a mega confectionery company, Roshen.

Some Ukrainians see Saakashvili’s appointment as intended to diminish the powers of certain oligarchs, chiefly, that of billionaire Igor Kolomoisky, the ex-governor of the industrial backbone of Ukraine, the Dnipropetrovesk region.

Saakashvili’s predecessor in Odessa, Igor Palytsa, was seen as “a man of Igor Kolomoisky,” added Magda.

The ex-Georgian leader will still have to cope with Kolomoisky’s influence in Odessa’s regional council, where the oligarch “has control over quite a large minority,” noted one Odessa-based blogger, Nikolai Holmov.

“If Odessa is a success, it will mean electoral points for Poroshenko from there,” predicted Yuriy Panchenko, editor of the Evropeiska Pravda news service. The region “traditionally has voted for the [Russia-leaning Party of] Regions, but was never a huge fan of it.”

The 47-year-old Saakashvili’s appointment in Ukraine is perhaps not as random as it might seem on the surface. He can speak Ukrainian and did his military service in Ukraine during the late Soviet era. In addition, he studied as an undergraduate at the Institute of International Relations at Taras Shevchenko University in Kyiv. It was there that he became friends with Poroshenko. Currently, however, Saakashvili is not seen as a member of the president’s inner circle.

It remains to be seen how Saakashvili will try to win over his new constituents. During his 2004-2013 presidency in Georgia, Saakashvili was not often praised for compromising with political opponents. He was known mostly for single-mindedness in pursuing political objectives.

In response to his appointment in Odessa, some Georgians sneered that Saakashvili “finally got himself a Lazika,” a city that he had planned to build from scratch on Georgia’s own Black Sea coast.

Meanwhile, some area specialists in the West, mindful of the former president’s role in Georgia’s 2008 war with Russia, his reputation for brashness and a mixed record of civil rights, expressed skepticism.

“Odessa is a complex Russophone region with complicated identity politics, and appointing a controversial Georgian with so much baggage with Russia and the Russians seems like a very ill-thought-through move,” commented Thomas de Waal, a Caucasus scholar at Washington, DC’s Carnegie Endowment for International Peace.

If Saakashvili decides to use the same tough-minded reform approach in Odessa that he employed in Georgia – televised nighttime raids on the homes of suspected mafiosos, for instance – he may unsettle a delicate balance of business and cultural interests, some Western observers fear.

Saakashvili, however, has promised to work closely with the mayor of the city of Odessa, Gennady Trukhanov, a member of the Party of the Regions. He has underscored that he does not intend to have or share business interests with anyone.

Many in Ukraine view Saakashvili and the various former members of his government now serving as Ukrainian officials or presidential advisors as a welcome change from many of their own corruption-prone politicians.

As yet, no indication exists that some of Saakashvili’s old political friends and allies will join him in Odessa. Their presence in Kyiv, though, could provide much-needed support for the new governor.

Some observers wonder whether these relative newcomers to Ukraine have the background for the reform task at hand.

“I am sure the ‘genatsvale’ government means well, but not sure how much they know or can do,” said Natalia Bogdanova, a middle-aged schoolteacher in the town of Nizhyn, some 150 kilometers northeast of Kyiv. “Genatsvale,” Georgian for “my dear,” is often used condescendingly in the post-Soviet world to refer to Georgians.

“Health Minister Kvitashvili, for one, promised to bring wifi to every hospital in Ukraine,” she went on sarcastically. “I wonder if he’s been to any of those hospitals.”

Political analyst Magda believes that, for now, Ukrainians are willing to give the Georgian carpetbaggers the benefit of the doubt. “There is no disappointment in the Georgians yet,” said Magda. “But neither does anyone hold any messianic expectations for them.”