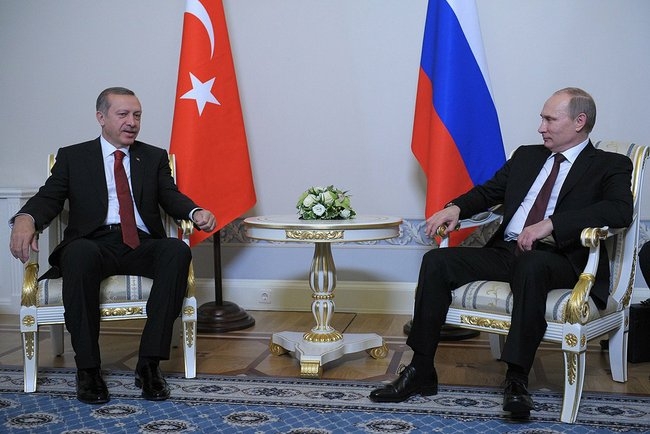 Turkish President Recep Tayyip Erdogan (left) meets with Russian President Vladimir Putin during a Russian-Turkish Cooperation Council gathering in St. Petersburg in late November 2013. Although the conflict in Ukraine and the treatment of ethnic Tatars in Crimea has strained the Russo-Turkic relationship, Turkey has decided not take as strong a political stand against Russia as its NATO allies. (Photo: Russian Presidential Press Service)

The deepening Ukrainian crisis is placing Turkey in a difficult diplomatic position. At stake for officials in Ankara are Turkey's commitments to its Western allies and its cultural kin, Crimean Tatars, against its economic and political relationship with Moscow.

Turkey’s diplomatic dilemma intensified in early May amid a rapid escalation of tension between Crimean Tatars and Russian officials. The early May troubles were triggered by the banishment of Crimean Tatar leader Mustafa Jemilev. Tatar protesters conducted several rallies seeking to have the ban on Jemilev lifted. Local Russian officials responded with a threat to prosecute Tatar leaders and ban their civic organization, the Mejlis.

Prior to the protests, Jemilev lobbied Turkish officials directly for support. “I told the Turkish government that I was banned from entering Crimea under fictitious pretexts,” Jemilev said on May 3 when speaking to reporters in Kyiv.

Ankara did indeed speak up on Tatars’ behalf. But the Turkish statement was carefully worded, indicating that Ankara is wary of angering its powerful Russian neighbor. “We expect the legitimate body of the Crimean Tatars to get the respect they deserve,” said May 5 the Foreign Ministry statement. The statement also criticized Jemilev’s banishment.

“On the one hand, it attaches importance to territorial integrity of nation states; it has a kinship with the Crimean Tatars and it is a NATO member,” Ülgen continued. “But on the other, there is a deep economic engagement with Russia and, on top of that, there is a personal relationship between [Russian President Vladimir] Putin and [Turkish Prime Minister Recep Tayyip] Erdoğan. That’s why it didn’t go as far as the US in terms of imposing sanctions against Russia.”

The caution exhibited on Crimean Tatars is uncharacteristic for Erdoğan, who prides himself on a firebrand reputation – never more so when it comes to defending Muslims abroad. But the Turkish government claims its approach toward Russia is working. Officials cite as an example President Putin’s April 21 decree that rehabilitated Tatars repressed under Soviet dictator Joseph Stalin and promised a “national, cultural and spiritual renaissance” of Crimea’s minority groups.

In a move that was widely interpreted as a goodwill gesture to Moscow, the government-run national air carrier Turkish Airlines has announced that it will resume flights to Crimea in June.

Jemilev “carries potential for political embarrassment for the [Turkish] government,” noted Semih Idiz, diplomatic columnist for the Turkish newspaper Taraf. “Erdoğan has said he has discussed the issue with Putin and he has been told that Moscow has said they will be more careful about it, but the leader of the Crimean Tatars is barred from Crimea and there is nothing really Ankara can do.”

A Turkish Foreign Ministry representative could not be reached for comment.

Moscow’s real leverage over Ankara is natural gas. In 2013, Turkey received roughly 60 percent of its natural-gas imports from Russia, according to the International Energy Agency. “I am sure Turkey can’t start a new cold war,” said Umut Uzer, an assistant professor of international relations at Istanbul Technical University. “The fact that Turkey is so dependant on natural gas from Russia .... [means that] Turkey definitely has to take that into account.”

The dependency on Russia seems set to continue for the foreseeable future. “Given the fact that our hydro-electric dams have completely failed to produce electricity because of the drought, even in summer, any cut-off in supply [of gas] could have a drastic effect on the Turkish economy,” warned Atilla Yeşilada, a political consultant at Istanbul’s Global Source Partners, an investor consultancy.

Elsewhere, the Ukraine crisis is encouraging European Union states to lessen their energy dependency on Russia, thus presenting Ankara with opportunities to expand its role as a transit state. The recently launched Trans-Anatolian Natural Gas Pipeline project will cross Turkey to bring 16 billion cubic meters of Azerbaijani gas per year to Greece, Italy and Balkan customers. More projects would follow, if Turkey had its way.

“Turkey would like to become a regional energy hub in the region,” said Emre İşeri, an assistant professor of international relations at Izmir’s Yaşar University.

For Turkey, there are two significant obstacles standing in the way of realizing its pipeline ambitions – high costs and Russian interests. Moscow clearly would prefer to maintain its strong energy position in Turkey and the EU. In April, for example, the deputy head of Russia’s state-run energy giant Gazprom, Alexander Medvedev, met with Turkish Energy Minister Taner Yıldız to explore the possibility of expanding the company’s exports to Turkey, which, at 26.61 billion cubic meters, currently ranks second only to Germany (40.18 bcm) as a GazProm market.

Ultimately, the Ankara’s hand could be forced by Russian leader Vladimir Putin. “The crucial question is ‘What does Putin want to do?’” said Yesilada, the political consultant. “Does he plan just to stay in eastern Ukraine, or does he have plans on [sic] the Caucasus? Does he want to integrate [Turkish ally] Azerbaijan back into Russia’s sphere of influence?”

At present, only Putin knows the answers to such questions. Depending on his choices, Turkey may feel compelled to harden its line on its relations with Russia.