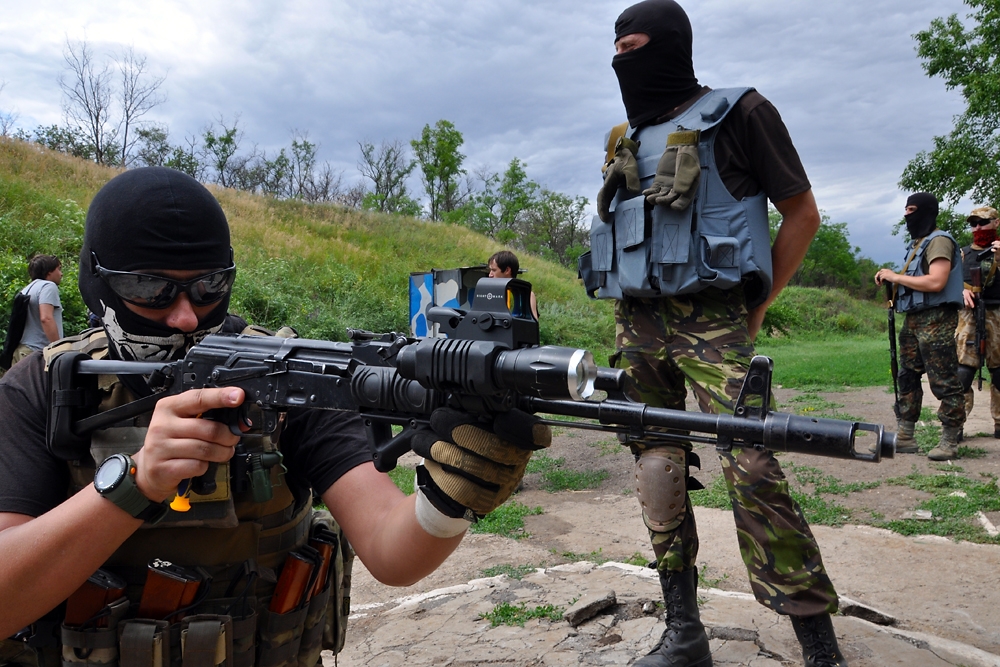 Almost 80 years ago, ideological true believers from all over the world flocked to Spain to fight in a civil war, serving in the famed International Brigades on the Republican side. These days, echoes of Spain can be found in Ukraine, where foreign ideologues now can be found battling separatists backed by Vladimir Putin’s Russia.

So far, the scale of foreigners going to Ukraine to fight is far smaller than was the case during the Spanish Civil War. For example, of the roughly 250 volunteers in the Azov Battalion, an irregular unit fighting for the Ukrainian government, 12 are foreign and 24 reinforcements from abroad are expected to arrive soon.

“We are not mercenaries, we are volunteers who receive no pay at all and fight for a righteous cause,” said Gaston Besson, a former French paratrooper who helps oversee the battalion’s foreign cohort. “We are anti-communist, but the spirit is the same as that of the International Brigades that fought [against Fascism] in Spain in the thirties.”

In June, Besson posted an appeal for foreign volunteers to join the Azov Battalion on his Facebook page. “You will find nothing but trouble, war, adventure, and perhaps death or serious injury, but you will definitely have great memories and make life-long friends,” he wrote.

“Every day I receive dozens of requests to join us by e-mail, especially from countries like Finland, Norway and Sweden,” added Besson, who has lots of combat experience from conflicts all over the world. “I reject 75 percent of them. We do not want trigger-happy fanatics, drug addicts, or alcoholics. The volunteers must pay for their own ticket and then begin training in Kyiv before being sent to the front lines.”

The battalion, which was formed in April, had its baptism of fire on June 13, when the unit participated in an operation to retake the pro-Russian controlled city of Mariupol, situated on the north coast of the Sea of Azov, in southeastern Ukraine.

Many of the Azov Battalion members describe themselves as ultra-right Ukrainian nationalists. They proudly wear symbols and use slogans associated with neo-Nazis, such as black t-shirts with the Celtic cross. Football ultras have also joined the ranks of the battalion, which was founded by the National Social Assembly, a confederation of ultra-nationalist organizations, as well as Ukrainian groups that oppose alignment with the European Union and NATO. This far-right ideology is what continues to draw like-minded activists from Sweden, Italy, France, Italy, Canada and even Russia.

For an Italian citizen in the Azov Battalion, 53-year-old Francesco F., the fight in Ukraine has given him a sense of purpose. “On the Maidan barricades I was like ET, finding ‘home’ on the side of Ukrainian nationalists”, said Francesco, who during the 1970s and 80s was affiliated with the National Vanguard ultra-right movement in Italy. “After the annexation of the Crimea and the explosion of the Eastern part of the country, I could not abandon them [Ukrainians] to face the Russian threat alone. That’s why I chose to enlist and fight.”

At their camp at Berdyansk, a city on the Azov Sea roughly 80 miles southwest of Donetsk, members of the battalion lined up one day recently, all wearing balaclavas to cover their faces for fear of repercussions should they be identified. At the order of their commander, they ran to a battered van that was to take them to a firing range.

On their way to shooting practice and maneuvers, fighters paid homage to their Italian comrade Francesco F. by singing a hymn honoring Mussolini. Francesco, whom everybody calls “Don,” or “uncle,” fights under the nom de guerre Stan.

Francesco was sitting next to Severin, a 20 year-old Swedish volunteer who has a tattoo on his bodybuilder-like biceps with the inscription “son of Odin.” A pounding nationalist rock song called “Death to the Enemy” played from a mobile phone, and battalion members took turns insulting Russian President Vladimir Putin's manhood.

At the firing range, a Swedish instructor offered training on urban warfare. The man, who did not want to be identified, was dressed in black, shaved, lean, and muscular. “I came to train you in the most difficult tactics, urban warfare.” He harangued the battalion with the attitude of an officer. “I will show you how to break into a building, take it and, if you are lucky, get out of it alive.”

Mikael Skillt is perhaps the most well-known foreign fighter of the battalion. This Swedish sniper, with seven years' experience in the Swedish Army and the Swedish National Guard, was a member of the neo-Nazi Svenskarnas party in Sweden. He is one of the few fighters who agreed to speak without covering his face; he supposedly has a 5,000 euro (80,000 gryvna) bounty put on his head by pro-Russian elements. This amount in Ukraine is worth over the average yearly wage.

“They can come get me if they want. I fight against the idiots who believe in what Putin says,” he declared. “At Mariupol, a sniper tried to shoot me from a window. After locating him, I waited until he was a little uncovered and then pulled the trigger. He just had no hope,” Skillt said.

Dressed in his camouflage combat fatigues, Skillt explained what drove him to enlist in the Azov Battalion, “I saw on TV snipers killing civilians and nationalists on Maidan Square, so I decided to join in.” He confessed that he gets a rush out of combat, “There is something special when your heart is beating like mad and you see all these bullets flying around and bouncing on the ground near you.”

Muran, a young Russian who also fights with the Azov Battalion, said he came to Ukraine because he wanted to help bring down Putin’s government. He does not know if he will be able to go back to Russia, as he is now considered a traitor. “I would rather blow myself up with a grenade than be captured alive,” said the masked 24 year old from the Ural Mountains.

Fausto Biloslavo is a freelance journalist who works in Ukraine. Laura Lesevre served as a translator in gathering information for this report.