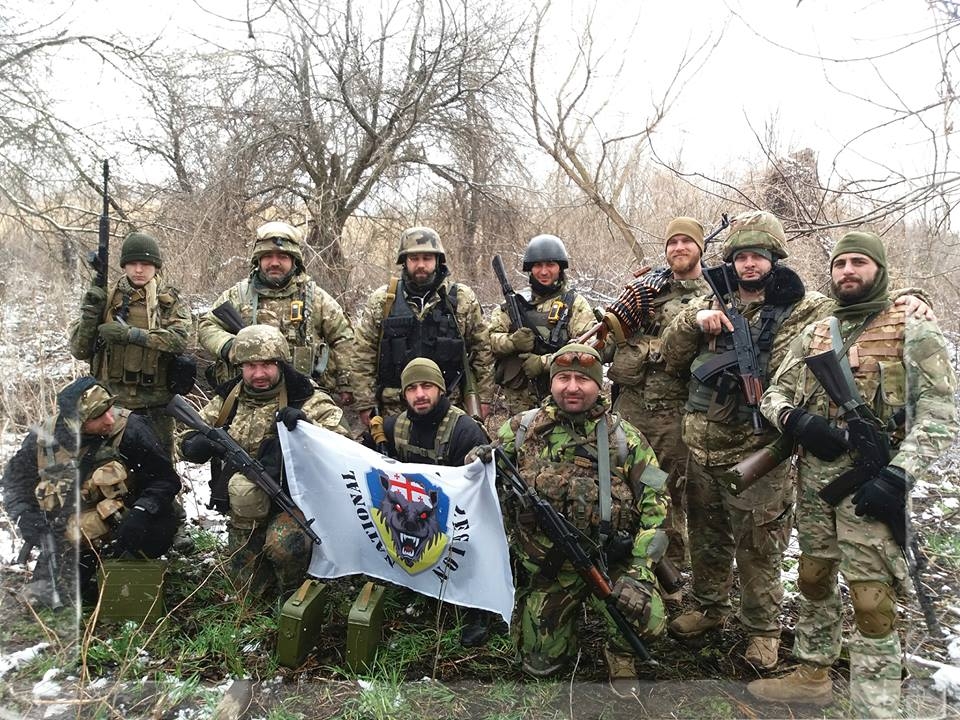 The "Georgian Legion" fighting in Ukraine, from the facebook page of its commander, Mamuka Mamulashvili.

Ukraine has released a Georgian soldier whose arrest -- under a Russian warrant -- sparked controversy and accusations that the pro-Western governments were colluding with Moscow.

That warrant was issued in Russia late last year based on a murder that Tsertsvadze was accused of committing in Russia in 2003. It was no doubt germane that, in the interim, Tsertsvadze also had fought in Georgia's war over South Ossetia and on the side of Ukraine's government against Russian-backed separatists in eastern Ukraine.

The arrest quickly became a political issue: Georgia's United National Movement Party accused the ruling Georgian Dream government of secretly giving Russia information on Tsertsvadze. “The Georgian government is using tricks, as they can’t directly pass the soldiers on to Russia. They didn’t warn soldiers that there are criminal charges against them in Russia," said UNM spokeswoman Khatia Dekanoidze. "Tsertsvadze left the territory of Georgia and he was arrested in Ukraine. This is a very evil trick, which is being implemented against our soldiers." Former president and erstwhile UNM leader Mikheil Saakashvili echoed that sentiment, as did Tsertsvadze's Ukrainian lawyer.

Georgian Prime Minister Giorgi Kvirikashvili denied those accusations and accused UNM officials of playing politics with the arrest. "Over the past two days, our Chief Prosecutor Irakli Shotadze has been in touch with Ukraine's Chief Prosecutor, and we hope this case will be closed without Tsertsvadze's extradition to Russia," Kvirikashvili said, claiming that political opponents "have engaged their television station, their partner stations and a part of the NGO sector to distract us from the main agenda and keep us from proving that we are in fact not ruining the country."

Tsertsvadze was part of the "Georgian Legion" of his countrymen fighting on the side of Ukraine in its war against Russia-backed separatists in eastern Ukraine. The legion's commander threatened that if Kyiv were to extradite Tsertsvadze to Russia it would pull out of Ukraine.

Upon his release, Tsertsvadze said he was "shocked" that Georgia's border guards didn't warn him, as he flew from Georgia to Ukraine, that he was on the Interpol list. "But if this is fate, it's better to die on the battlefield than for them to slaughter you like a sheep," he said. "Nevertheless I remain an officer of the Georgian armed forces. Governments come and go, people change, but Georgia will remain forever. And as long as I have strength, I will fight against Russia until the last drop of blood. Today that's Ukraine, tomorrow it may be Africa or any other part of the globe."

Tsertsvadze, however, is not out of the woods yet: he only has been released from pre-trial detention, and has to remain in Ukraine for 40 more days. But it seems he won't be extradited to Russia in any case. “Based on the information provided by the Georgian side, it was established that the individual was involved in matters important for security and territorial integrity of Georgia, and that his extradition to the Russian Federation might negatively affect the state interests of Georgia. Moreover, it was confirmed that Giorgi Tsertsvadze participated in combat operations on the side of the Ukrainian Armed Forces in eastern Ukraine," the prosecutor's office said in a statement.