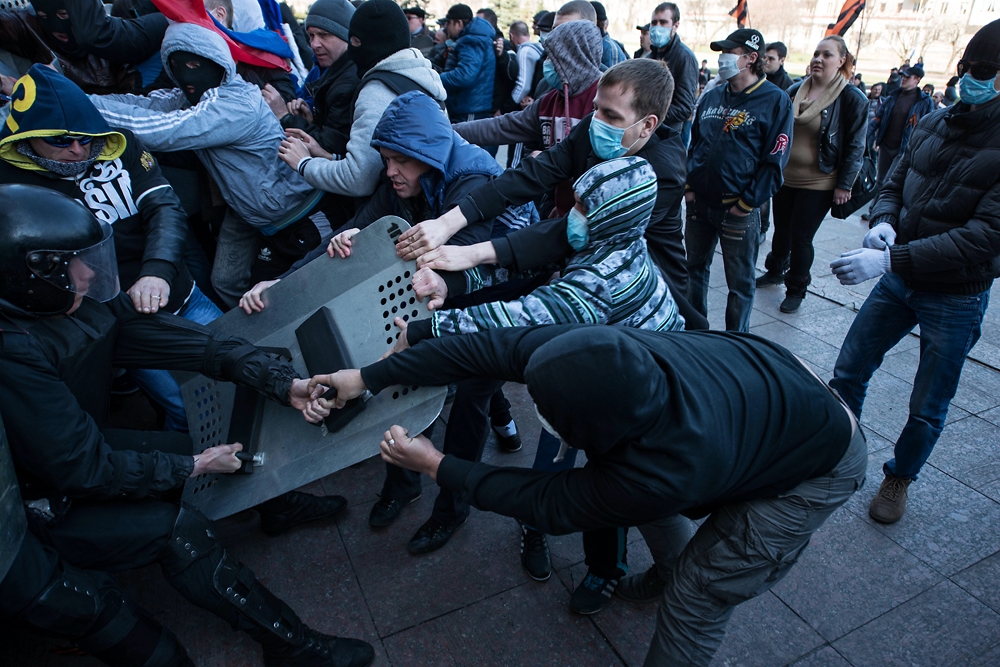 Pro-Russian demonstrators rip riot shields from the hands of Ukrainian police in Donetsk on April 6. 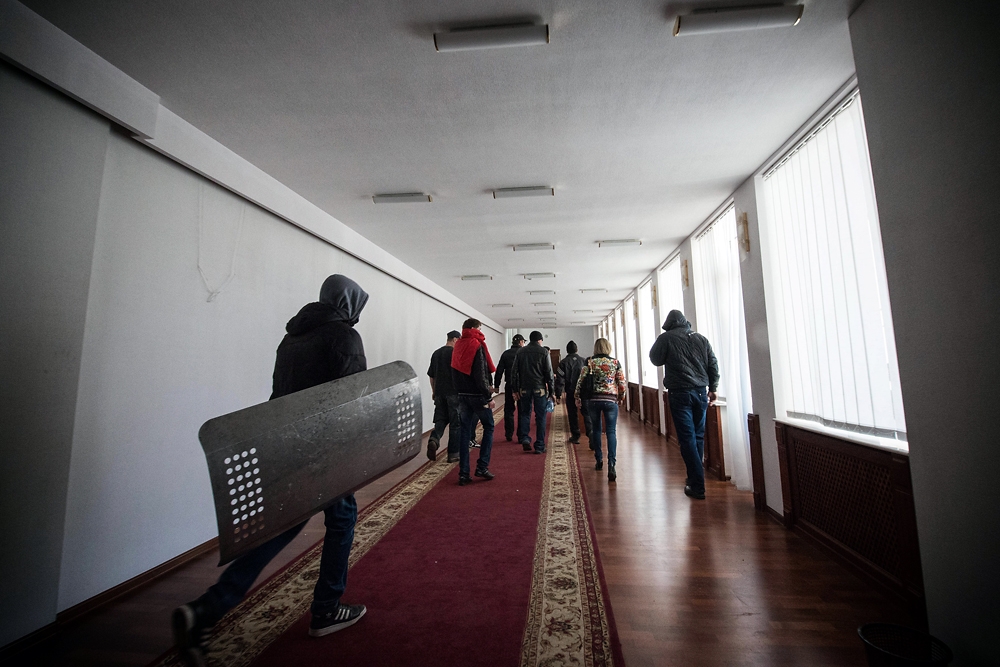 After breaking through the police line, demonstrators stormed the regional government building. 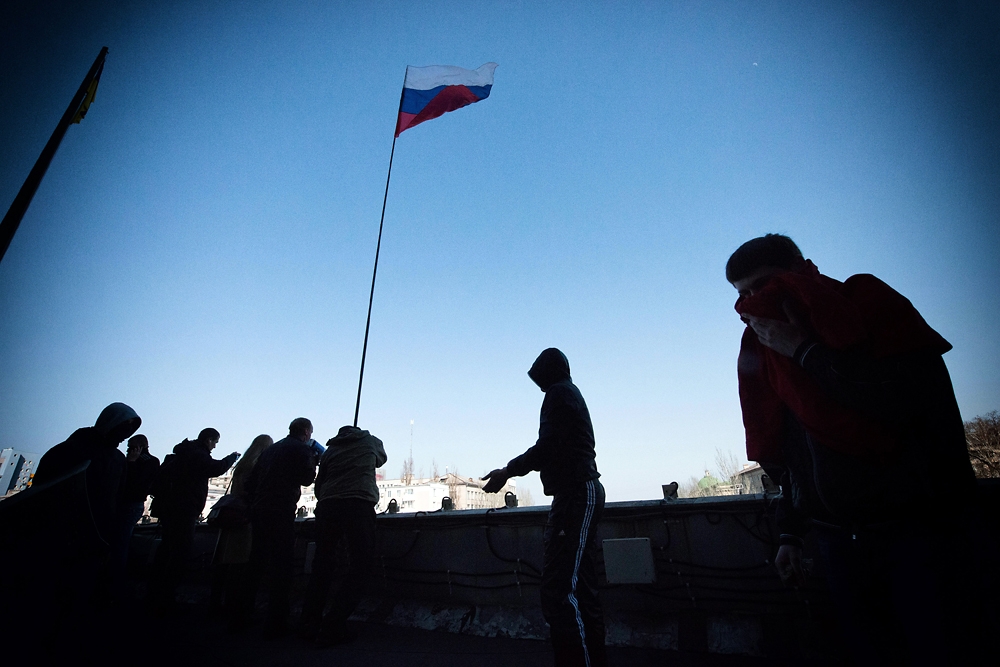 Several offices inside the building were vandalized before demonstrators hoisted a Russian flag on the roof of the building. 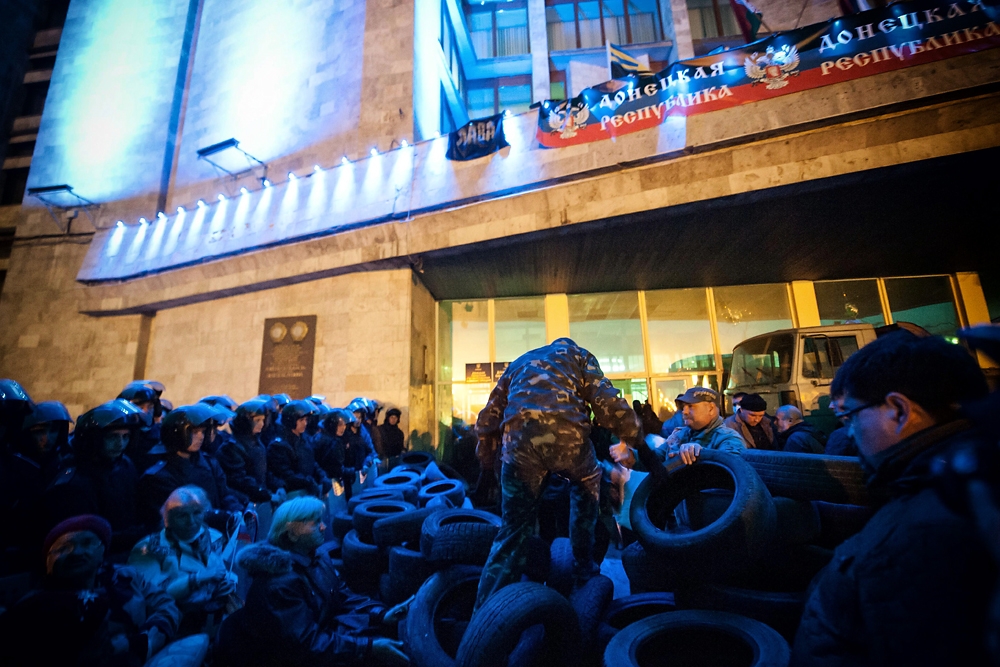 During the night more demonstrators arrived to erect barricades outside the building. 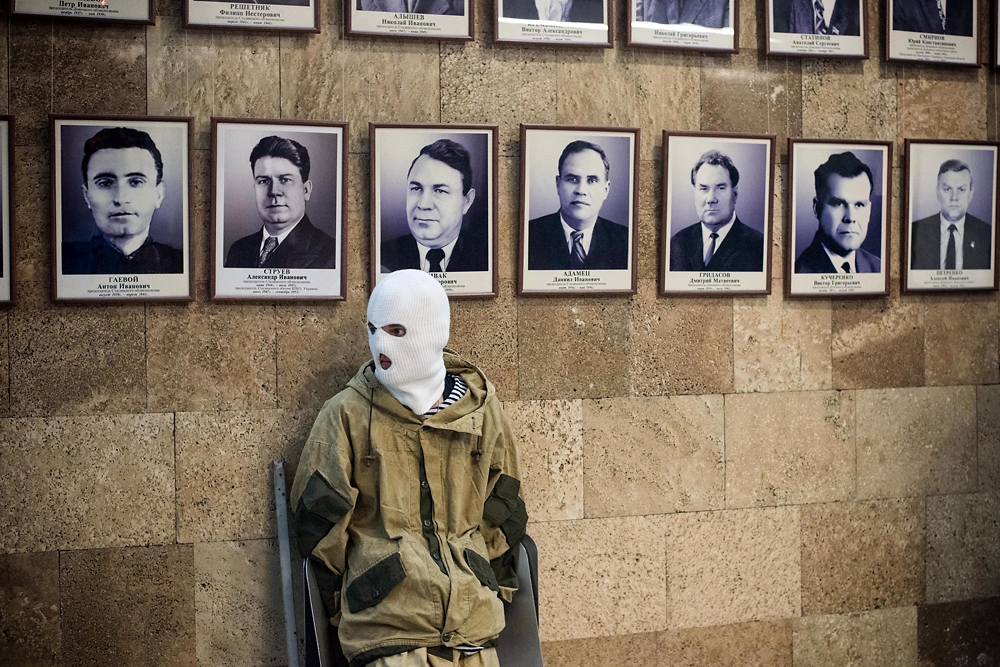 Many of the pro-Russian activists wore balaclavas and brought weapons. 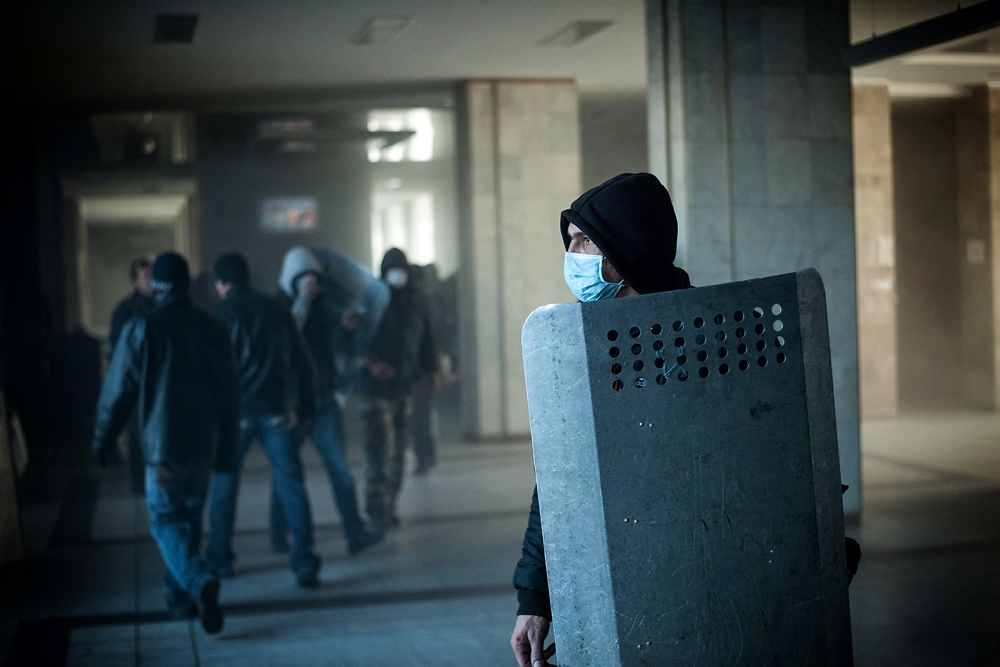 The attack in Donetsk was part of a coordinated demonstration that took place in several eastern Ukrainian cities. 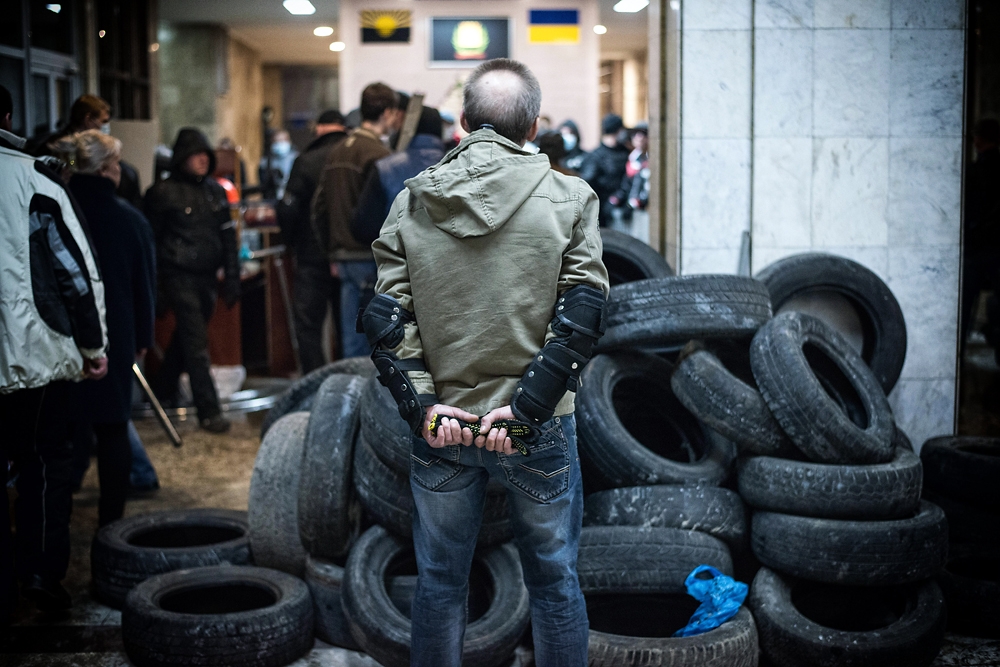 Donetsk police say they are negotiating with the demonstrators who now occupy the administration building. 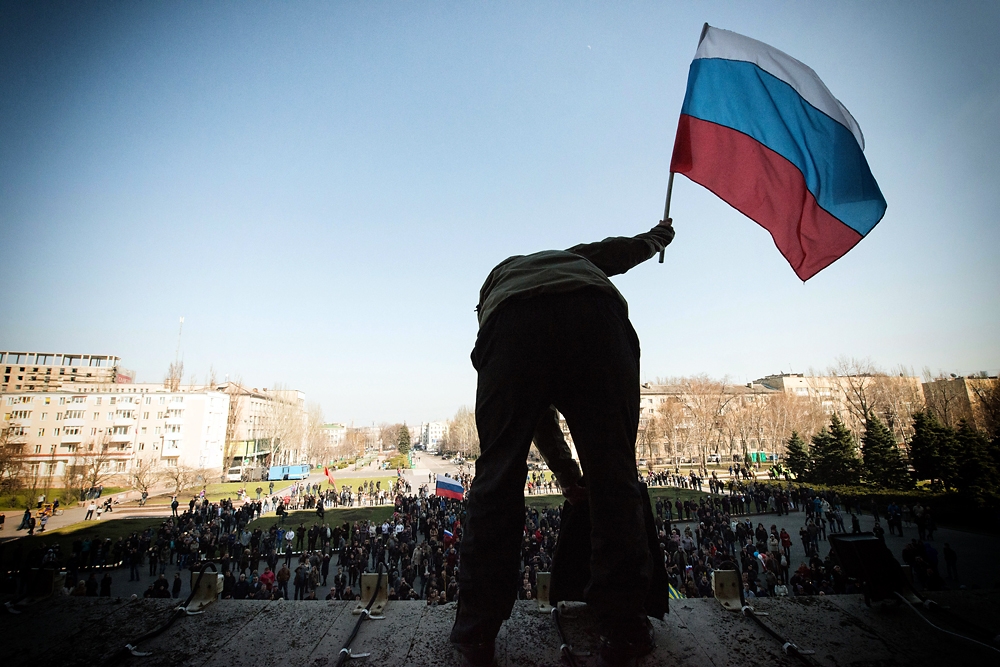 After taking over the building the pro-Russian activists called on Russia to provide troops as peacekeepers.
prev
next

Eastern Ukraine is in the process of calving from the rest of the country, and authorities in Kyiv don’t seem to have a clear way to prevent it.

Pro-Russian protests erupted in major cities on April 6, culminating in the takeover of government buildings in Kharkiv, Donetsk and Luhansk. Protesters in Donetsk formed themselves into their own constituent assembly and quickly proclaimed the Donbas region to be a “people’s republic,” according to Russian media. A report distributed by the Interfax news agency indicated that the Donetsk protesters would push for a regional referendum by May 11 on unification with Russia.

Ukrainian Prime Minister Arseniy Yatsenyuk accused Moscow of orchestrating events with the aim of creating a pretext for an invasion by Russian military forces, which have been camped on the Russian side of the border. "An anti-Ukrainian plan is being put into operation … under which foreign troops will cross the border and seize the territory of the country," Yatsenyuk told a government meeting in Kyiv. "We will not allow this."

In a televised speech to the nation, Interim President Oleksandr Turchinov also adopted a firm stance against the protesters, promising that "anti-terrorist operations will be carried out against those who had taken up weapons." Meanwhile, MPs in Kyiv were to take up a measure to declare a state of emergency in eastern Ukrainian regions, according to Ukrainian parliament’s website.

It was not immediately clear how Ukrainian leaders could back up tough talk with action that could restore Kyiv’s authority in eastern regions of Ukraine while averting considerable bloodshed. An armed move to disperse the pro-Russian protesters would likely invite a massive Russian military response.

“This is a delicate situation. There is a probability there could be armed violence," said Clifford Gaddy, a Russia expert at the Brookings Institution in Washington, DC. He added that because of a lack of “provable evidence” that the Kremlin was manipulating events, there was little the international community could do to influence developments in eastern Ukraine. “The plausible deniability aspect [for Russia] is really key here,” Gaddy said.

Elsewhere in Ukraine, the chief consequence of recent events could be a restriction of political rights. Turchinov indicated that the Ukrainian parliament would convene April 8 to consider amendments that would strengthen criminal penalties for separatism, according to a report distributed by the Russian news website Vedomosti. He also indicated that some political parties could be banned.

“I respect differing political opinions, including those of our opponents,” Turchinov said, according to the Vedomosti report. “But separatism and the use of arms against the existing government, carrying with it a direct threat to the safety and lives of our citizens – this is not politics. This is a serious crime.”

Gaddy, who co-authored a book on Putin published in 2013, cautioned there was no way of knowing how Russian-Ukrainian tension would play out. “No one knows what Putin is thinking,” Gaddy said. “We don’t even know what game he’s playing, let alone what rules he’s playing by.”