Locals in eastern Ukrainian regions are far from content with the way things are going in Kyiv — but polls show not enough to turn to Russia. 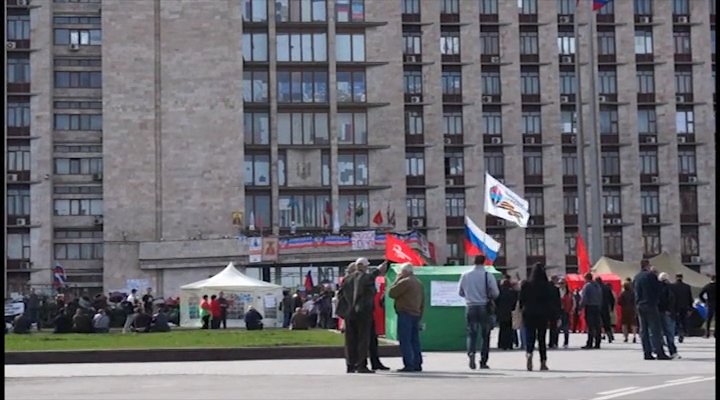 State-controlled media in Russia would like the world to believe a large majority of residents in eastern Ukraine yearn to bolt Kyiv for Moscow's warm embrace, but polling data does not show that to be the case. At the same time,  locals in eastern Ukrainian regions are far from content with the way things are going in Kyiv.

Self-proclaimed local defense forces, apparently supported by Russian special forces, have seized control in recent weeks of several towns and cities in eastern Ukraine, sowing uncertainty and raising the prospect of a full-blown conflict between Ukraine and Russia.

The tumult has left many families in eastern regions divided in their opinions and loyalties. “I am for united Ukraine, but my grandparents are for Russia. We talk a lot , but my grandfather's way of thinking is still Soviet,” said Katya, a 20-year-old resident of Donetsk, one of the hotbeds of separatism.

Aleksander Krutikov, another Donetsk resident, said he doesn't take active part in  pro-Russian rallies. “I am for Ukraine, but without that chaos,” he said. The problem now, he added, is that deescalating tension will be difficult because few people trust the politicians on either side. “Our [pro-Russian] separatists will say we want them [Ukrainian nationalists] to disarm first, and they [nationalists] will say they want separatists to disarm first, and the standoff will continue,”Krutikov said.

According to a recent poll conducted by the Kiev International Institute of Sociology from April 10-15, only 28 percent of inhabitants of the Donetsk region would like to see the region become part of Russia, and only 18 percent supported the seizure of the regional assembly by pro-Russian forces. Yet at the same time, 72 percent of people in Donetsk question the legitimacy of the current government in Kyiv.

In many respects, political discontent is rooted in economic dissatisfaction. In Yenakiieve, for example, the birthplace of the ousted president, Viktor Yanukovych, the local economy is dominated by the Yenakiieve Iron and Steel Works.  Resentment is palpable in the town: locals complain that they suffer while the rest of the country benefits from the complex’s output. They cite the fact that it lacks modern filtering systems, meaning residents must breath highly polluted air, and suffer a wide array of health consequences as a result.

In some towns and cities, especially in Slovyansk, which is controlled by pro-Russian forces, the large number of people who support the preservation of Ukraine's unity are afraid to speak openly on the topic.  “We live now like in Soviet Union,” said Elene, a Slavyansk resident, who like many interviewed declined to give their last name, citing fear of retribution. “When we talk [about the current situation] we lower the voice and make sure the windows are closed.  Do not think we all are like that [pro-Russian militants]. Around 70 percent of educated people do not support it [separatism], but we are scared.”

In some eastern towns and cities, a few, small pro-Ukraine rallies have taken place. One of the larger events occurred April 17, when as many as 5,000 people turned out for a rally in Donetsk, under heavy police protection. The rally venue had to be changed several times as a security precaution.

Regardless of their political sentiments, most people desperately want to avoid violent clashes. For those who came of age following the 1991 collapse of the Soviet Union, the nostalgia felt by older generations for the communist era is bewildering. When asked about the their recollection of the Soviet era, two twenty-somethings in Donetsk, Anya and Lela, just laughed: "All we remember from the days of the USSR is the ice-cream,” one said.