Ukraine Struggles to Reinterpret Its Wartime Past 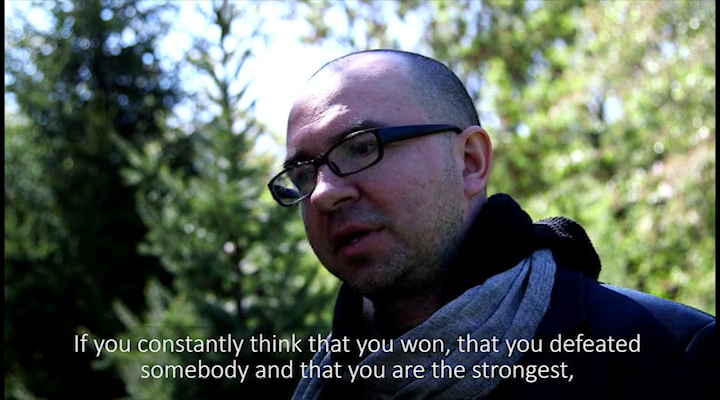 At war over territories and ideology, Russia and Ukraine are also fighting over World War II, the conflict that bonded the two countries together for over a half century as part of the Soviet Union. But this struggle over history is not a straightforward one.

Rather than abandoning the traditional Soviet Victory Day on May 9, Ukraine this year held another one — a Day of Remembrance and Reconciliation on May 8, in line with practices in Europe.

Critics charge that Ukraine is replacing one embroidered version of history with another. Proponents, though, counter that it is a long overdue process of self-reflection needed for building Ukraine’s self-identity.

“We are rejecting Soviet traditions that have discredited themselves and that the Russian Federation is using now to mobilize people to war against Ukraine,” commented Volodymyr Viatrovych, director of the state-run Ukrainian Institute of National Memory.

Viatrovych leads a campaign that has become known as decommunization; a battle to eradicate both tangible and intangible relics of Ukraine’s past, from 1922 to 1991, as a Soviet republic.

Ukraine, for instance, has stopped calling World War II the Great Patriotic War, a name that evoked a collective Soviet victory in an epic struggle between good and evil. In 2014, though, Ukrainian President Petro Poroshenko used the term “Patriotic War” to refer to the fight against separatists in eastern Ukraine and their Kremlin-sponsors.

Russian media, for its part, has used the term banderovtsy, or followers of Stepan Bandera, a controversial nationalist rebel-leader Moscow deems a Nazi-accomplice, to describe Kyiv’s own government.

But how Ukraine ultimately will manage to combine both parts of its past into one fact-based narrative could prove a daunting challenge. For now, those fought the Soviet Army and those who fought with it are both commemorated as heroes.

Nonetheless, some supporters of decommunization say that they don’t want to skim over the “criminal” actions they allege were taken by both Nazi and Soviet forces in Ukraine during World War II.

One observer hopes that eventually Ukraine can put all these various facts together for a complete history about its role in World War II, a conflict that cost it an estimated several million lives.

“We are arriving at a very difficult conclusion that a nation cannot have a single memory and single history, that there are different memories and histories,” said Volodymyr Yermolenko, a political commentator. “But the deeper we look at this, the greater is the chance that we can reconcile them.”