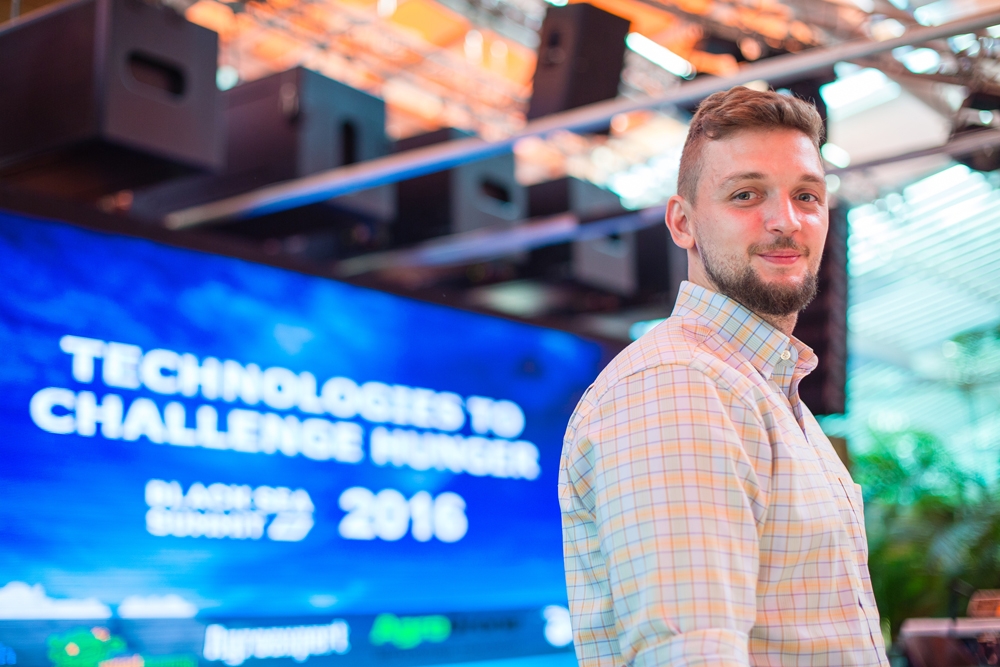 Andrey Sevryukov, founder of AgriEye, at the Black Sea IT Summit on September 13, 2016. Ukraine has long been known as an outsourcing center because of its abundance of skilled programmers. Now, some IT analysts believe the country is ready to take the next step and establish itself as a tech start-up hub. (Photo: Natalie Gryvnyak)

Ukraine has long been known as an outsourcing center because of its abundance of skilled programmers. Now, some IT analysts believe the country is ready to take the next step – establishing itself as a tech start-up hub.

The idea du jour at the recent Black Sea IT Summit – a two-day conclave of tech experts and entrepreneurs, held in Odessa – was that Ukraine had great potential to become an incubator for entrepreneurs, especially those in the IT sector.

Mark Turrell – a featured speaker at the early September summit and CEO of Orcasci, a web strategy consultancy – said Ukraine possessed all the elements for a fertile IT ecosystem. “It’s an attractive market, a mature outsourcing country, yet [it has] a new understanding of product development possibilities,” Turrell said. “A Ukrainian tech company can start with low investment, and [have] global perspectives.”

Optimism about the potential of Ukraine’s IT sector is tempered by the realization that there are substantial obstacles that must be overcome, including corruption, questionable political will and a lack of expertise in marketing. But many summiteers believed these hurdles are surmountable.

Ukraine’s economic woes have been well documented since the Euromaidan revolution in early 2015, followed by Russia’s seizure of Crimea and the Moscow-inspired conflict in eastern Ukraine. The political complications are especially worrisome for foreign investors. Fostering a thriving start-up culture could change all that. Denis Gursky, a former advisor to the prime minister of Ukraine and founder of one of the most successful open data platforms ‘1991 Open Data Incubator’ in Ukraine, believes the tech sector, if nurtured properly, could reverse Ukraine’s economic misfortunes.

“Ukraine’s government should focus on a start-up support program, which could include funding, [easy] start-up visa [regulations], tax liberalization, and support for incubators,” Gursky said. “Products and services that can be exported from Ukraine could save the economy,” he added.

Thus far, the Ukrainian national government has not shown particular interest in using state resources to foster a start-up culture. Yet on the regional and municipal levels, a few officials are already working with tech entrepreneurs to encourage the growth of a start-up ecosystem. Some notable IT fans among government officials are Andriy Sadovyi, the mayor of the western city of Lviv, and Mikheil Saakashvili, the governor of the Odessa region, whose administration has established a Department of Information Technology under the guidance of Lyubov Shypovich.

The Black Sea gathering sought to build stronger connections between government and tech entrepreneurs by highlighting the examples of constructive cooperation in other countries. Among the speakers at the conference was Ruben Nieuwenhuis, SEO of StartupAmsterdam, a company that works with local governments to shorten the learning curve on ways that state officials can encourage the growth of start-ups. He highlighted ways the Dutch government helped stimulate the growth of a start-up culture in the Netherlands.

If nothing else, global economic circumstances are pushing Ukraine to develop into a start-up hub. Karina Lapina, a tech expert who was a leading evangelist of the incubator concept at the Odessa gathering, noted that until recently local tech entrepreneurs had been content to reap low-hanging fruit via outsourcing, in large part because they did not have great communications skills, or felt uncomfortable operating in English. But over the last few years, that has started to change. To a certain extent, they have to keep moving forward because they cannot stay in place: other regions are fast emerging as outsourcing rivals, meaning that revenue for Ukrainian outsourcing operations is shrinking.

“In Ukraine, perspectives are huge, and [there are] few competitors practically in every sphere,” Lapina said, referring to start-up opportunities. “We have specialists and knowledge, and due to the greater competition in outsourcing, Ukraine is going in a product development direction, with more and more start-ups emerging.”

Two Ukrainian companies that raised their profile were Zamsa, which offers edible worms for baking cookies, and BioPosud, which uses hay in the production of pottery.

Another homegrown start-up that attracted attention was AgriEye, a software and consulting firm that encourages greater efficiency in Ukraine’s agricultural sector. Company founder Andrey Sevryukov said AgriEye’s main product uses multi-spectrum cameras and satellite data to increase soil fertility and crop yields, something seen as an emerging trend globally, yet still new for Ukrainian farmers. Sevryukov’s hope is that Ukraine can emerge as a center of agro-tech innovation.

“In Ukraine, the agrarian sphere is under-financed and the possibilities … look quite interesting,” he said. The only thing holding Ukraine back is old attitudes. “We don’t have the culture of product development within the [agricultural] sphere, which lacks proper vision and education.”

Other areas showing great potential in Ukraine are eco-efficiency and smart city development. Electric vehicle designers and renewable energy firms showcased their innovations at the summit, emphasizing the growing national ‘green’ trend. Like the agro-tech sector, green energy is a cultural phenomenon in post-Euromaidan Ukraine, driven, in part, by a strong desire among many to break the country’s dependence on Russian energy.

The country’s green energy pioneers are tending to focus their efforts on modern urban development. The effects can already be seen, most notably the transformation of the Soviet-era Expocenter of Ukraine complex. “Many technology companies in Ukraine are developing solutions for smart grid, distributed generation, self-driving cars, smart homes and smart cities,” said Roman Zinchenko, the founder of GreenCubator, an accelerator NGO for green initiatives.

Natalie Gryvnyak is a freelance writer based in Ukraine who specializes in writing about the IT sector.