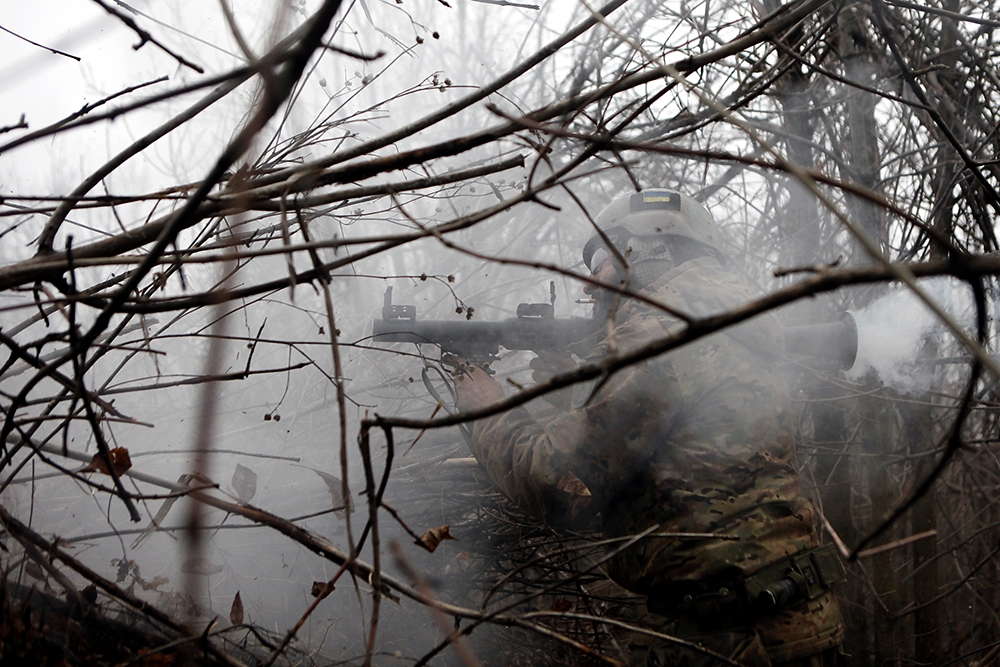 Covered in smoke, Ben returns fire at separatist positions with a rocket-propelled grenade. 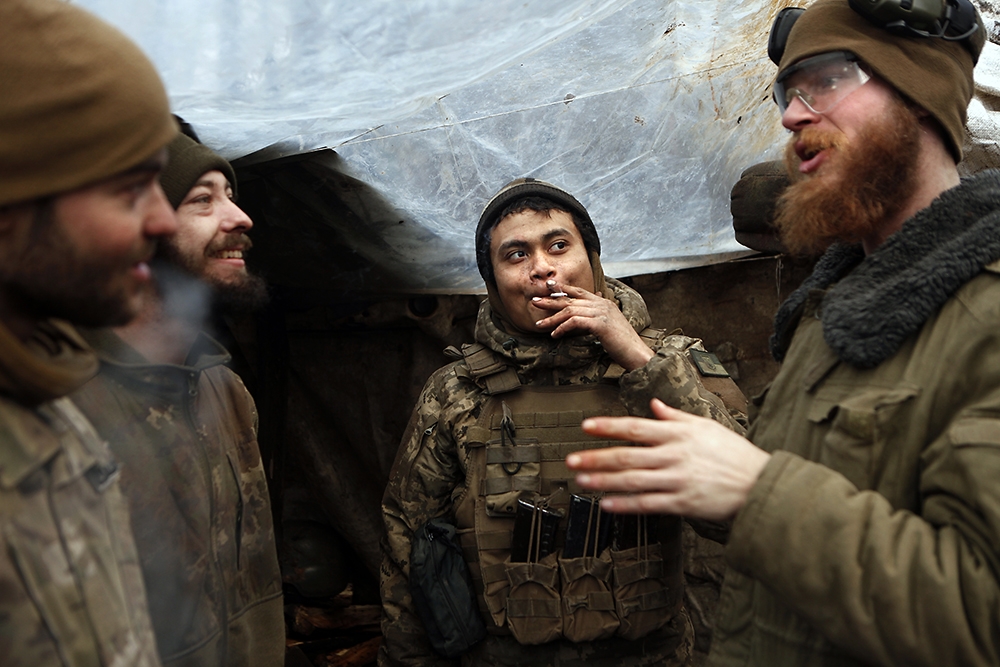 Cowboy, Alex, Charlie and Craig (left to right) chat about war issues in their frontline trench position near Donetsk. 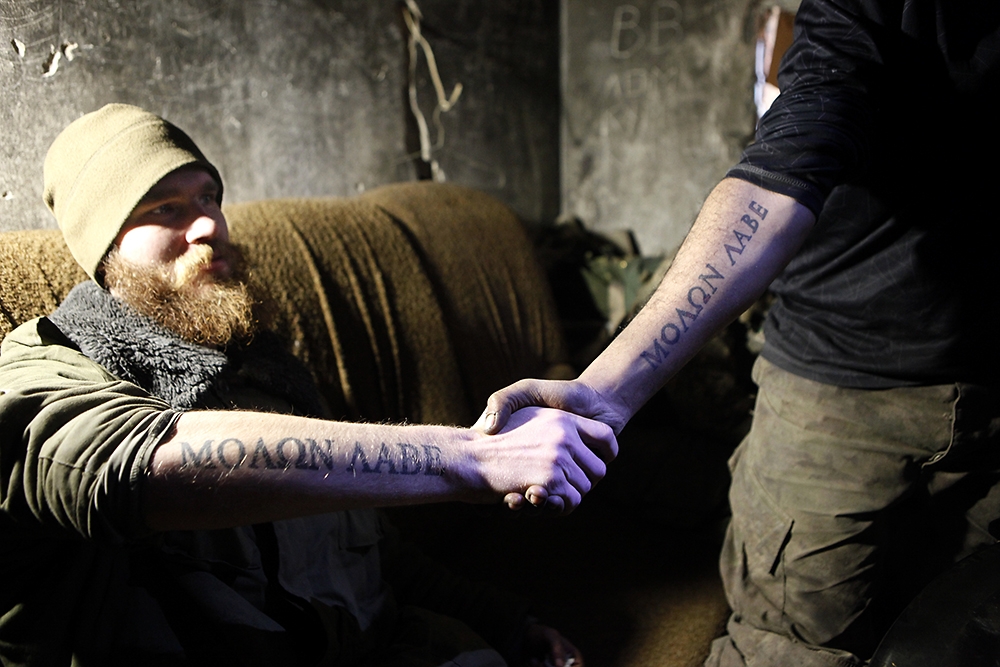 Craig (left) and Ben both have "Molon Labe" – a Greek phrase meaning “Come and Take Them” – tattooed on their forearms.

Charlie cleans his Kalashnikov weapon in his trench position. 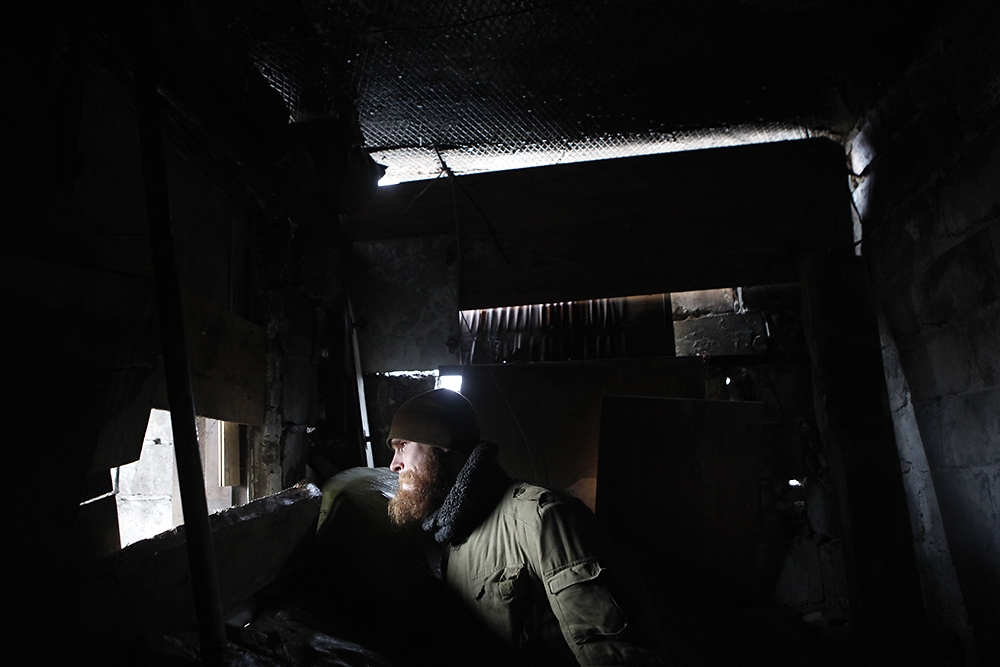 Craig observes enemy positions through a boarded up window in an abandoned house at the frontline. 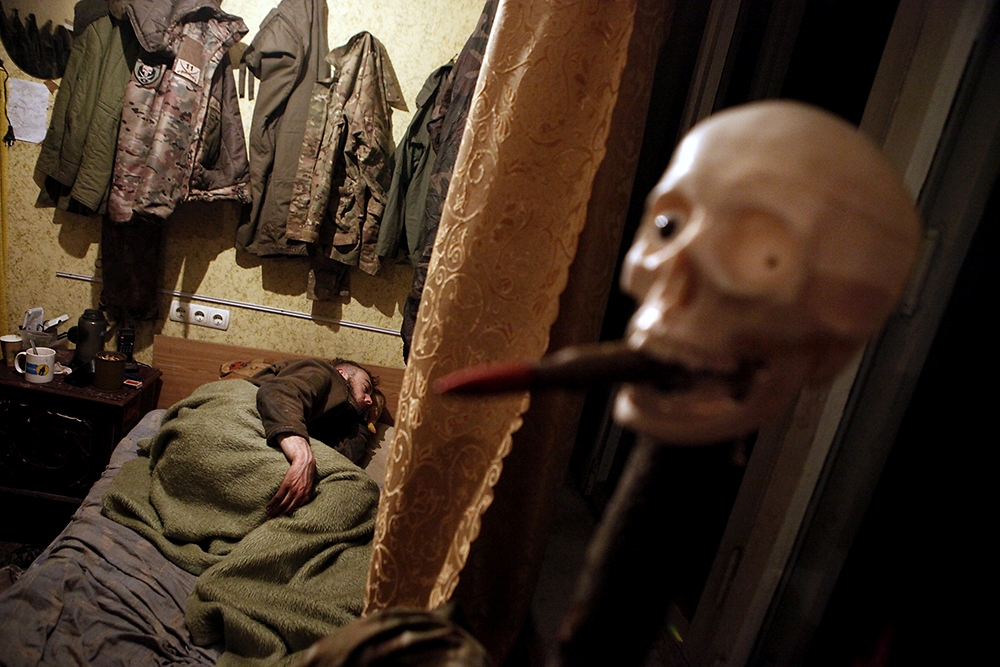 After seven days on the frontline, Alex immediately falls asleep in the building used as the base for the Right Sector. 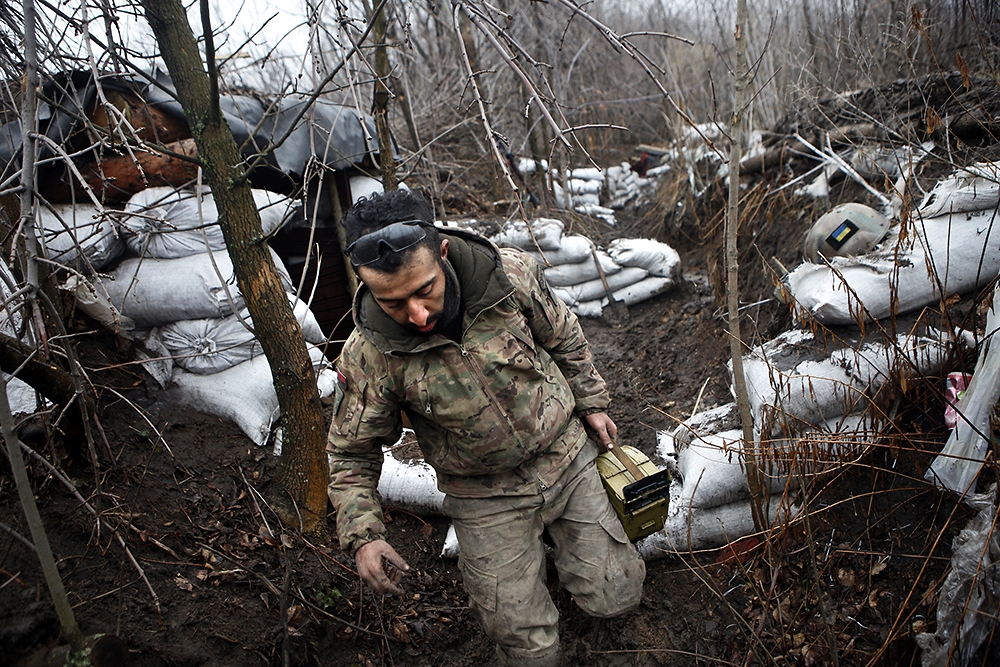 Ben carries more ammunition for a grenade launcher through the trenches. 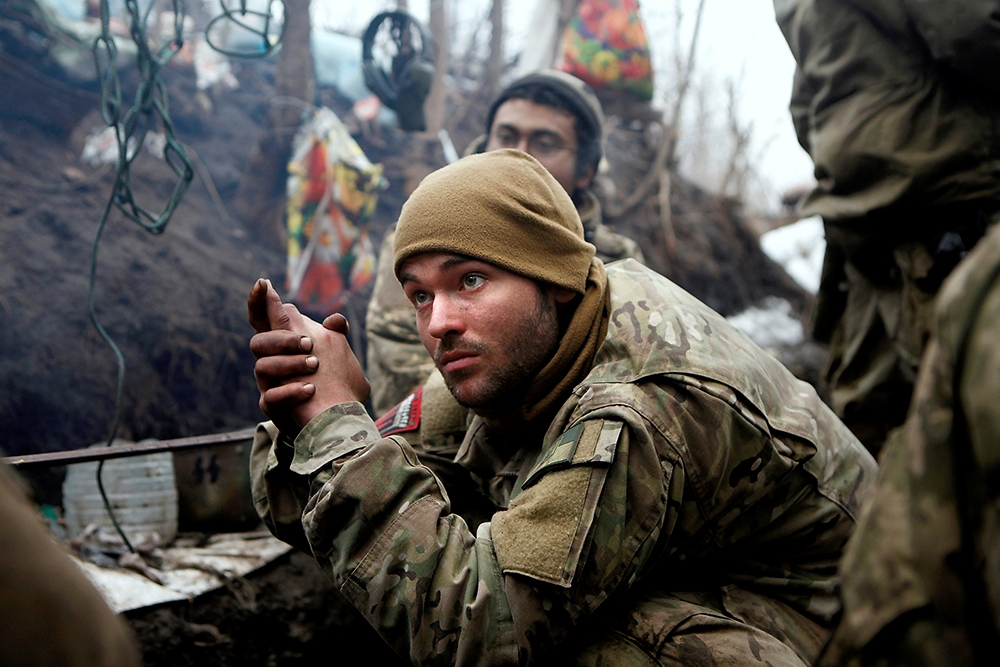 Cowboy ducks while grenades are fired by separatist forces at their trench line. 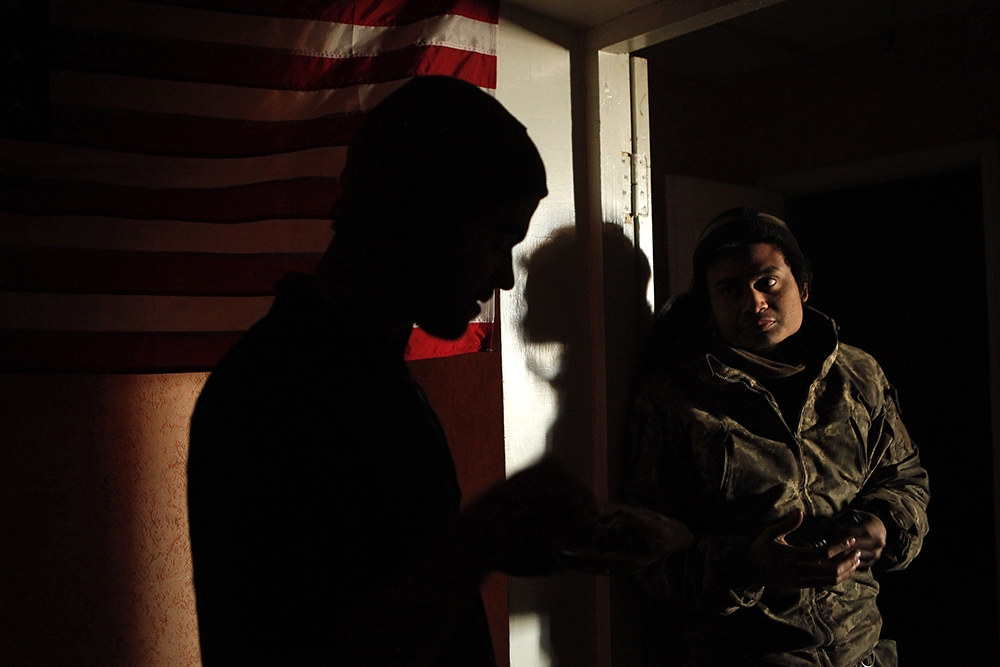 Charlie (right) talks to Cowboy in the dark after the public power supply was cut at the base of the Right Sector.

Charlie takes a short rest on an open field during an ammunition re-supply mission. 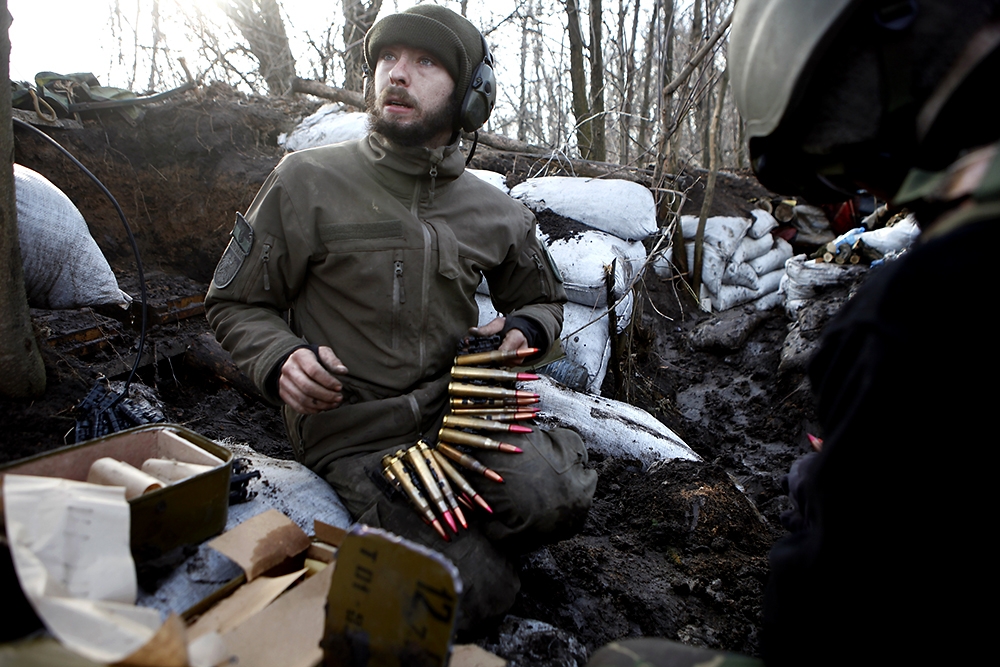 Alex prepares ammunition belts for a heavy machine gun shortly after a firefight erupts at their frontline position. 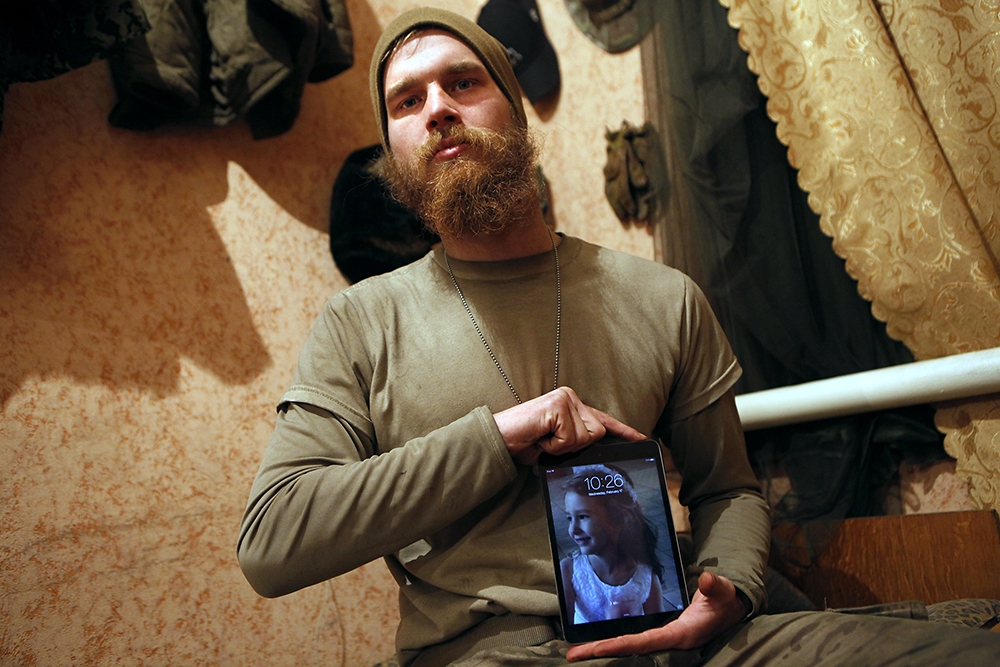 Craig shows the most important thing he keeps from his former life in the US: an image of his 5-year-old daughter. 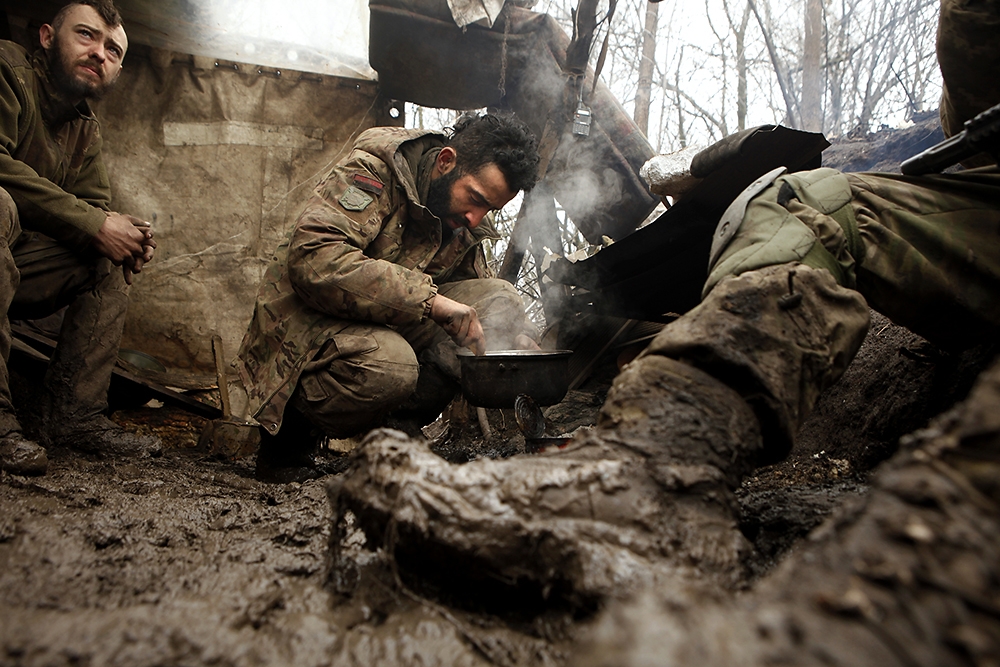 Ben (center) prepares a meal over a campfire in the muddy trench. 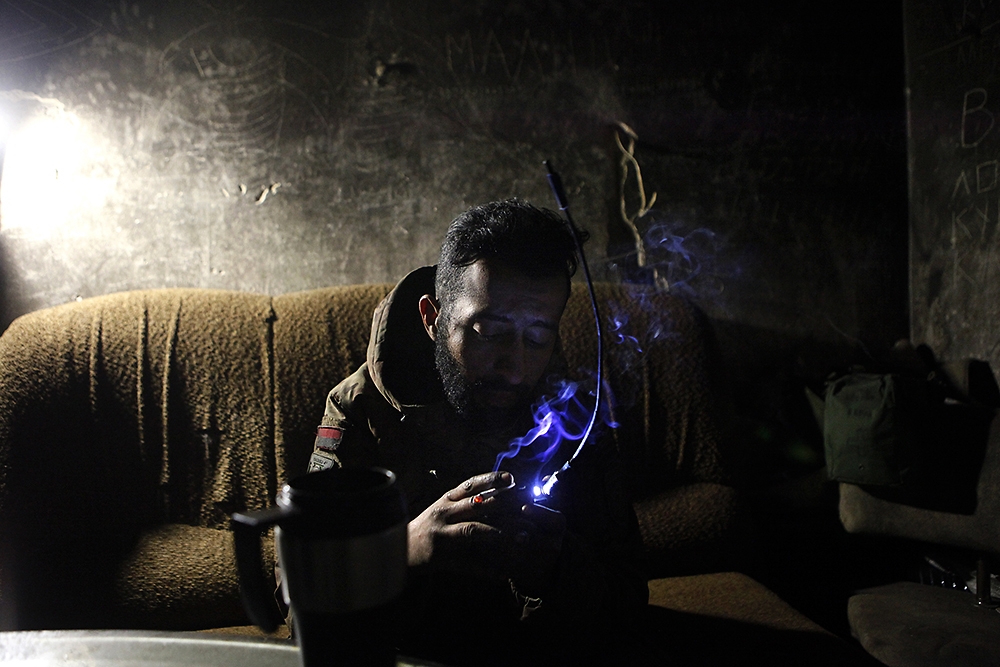 While scanning for a public radio broadcast, Ben smokes a cigarette in a safe house of the Ukrainian army. 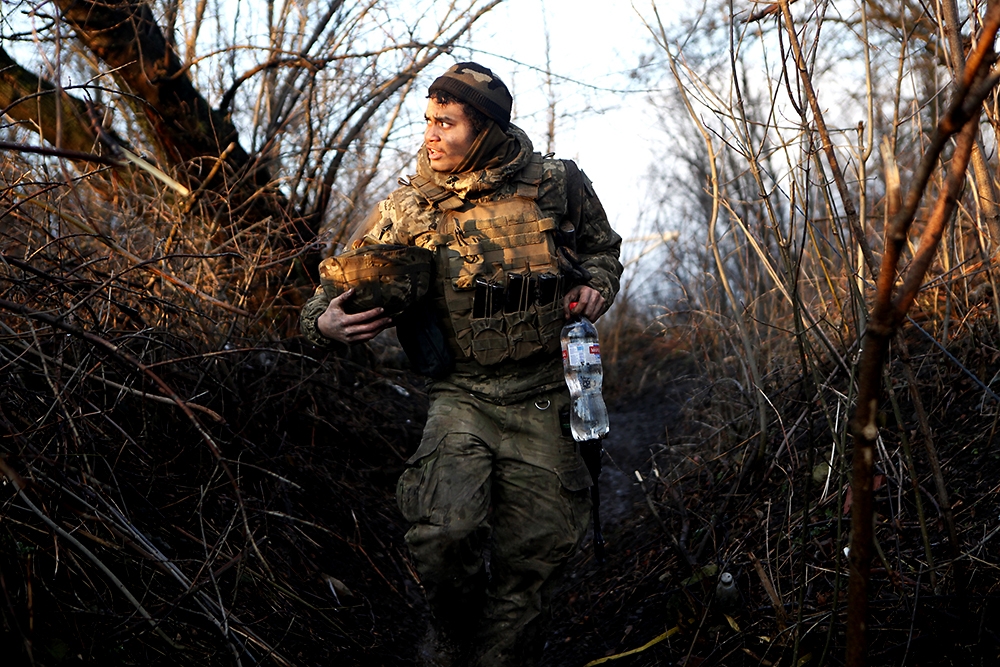 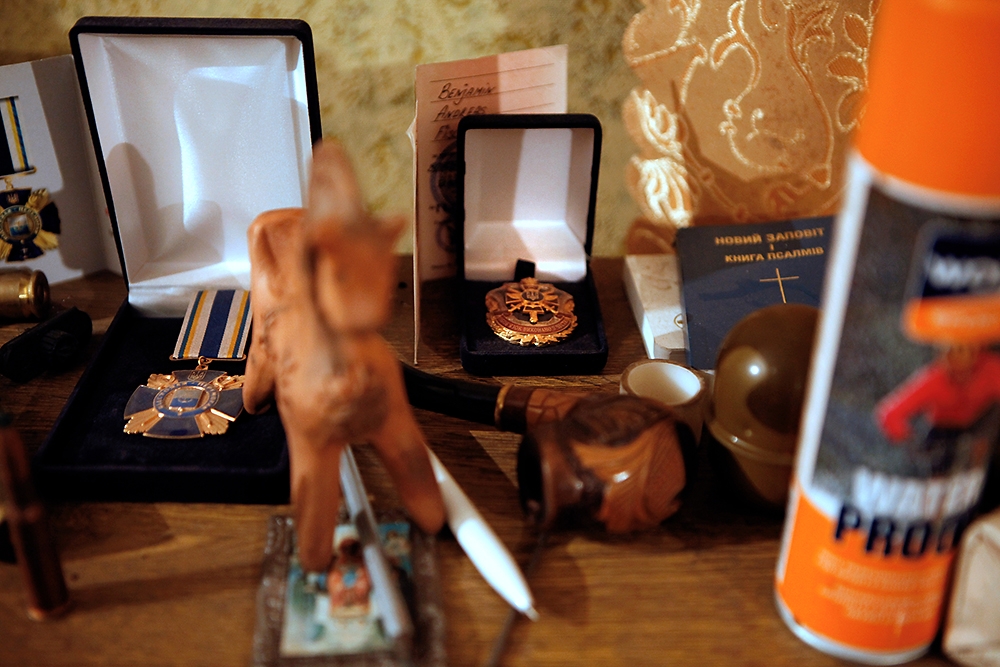 Ben was honored with two medals from the Ukrainian army for volunteering at the frontline. 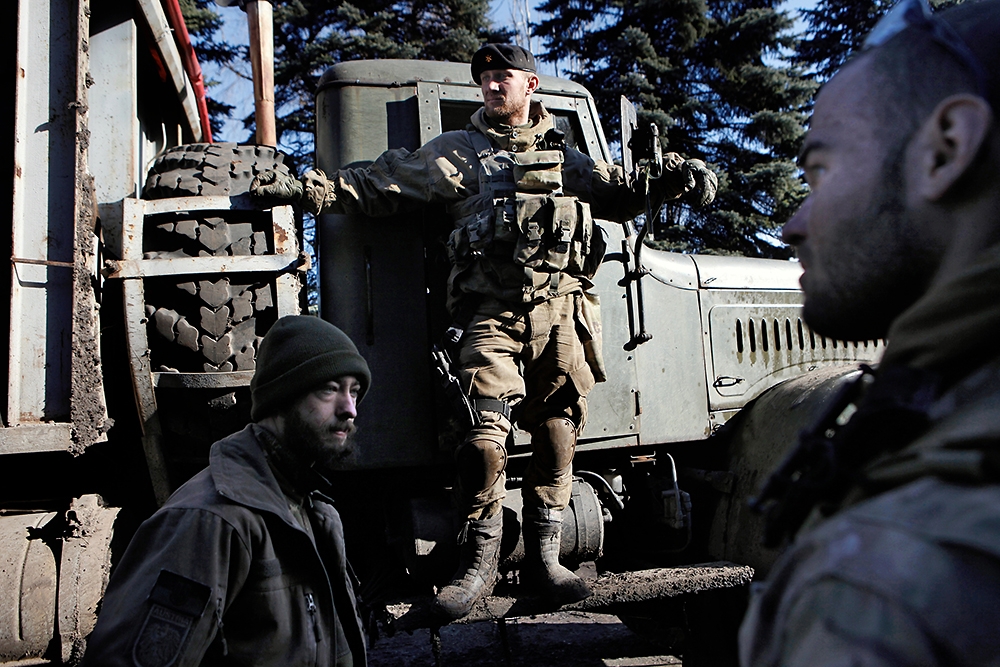 Alex (left) and Cowboy (right) prepare to unload a truck returning from the frontline to the base of the Right Sector. 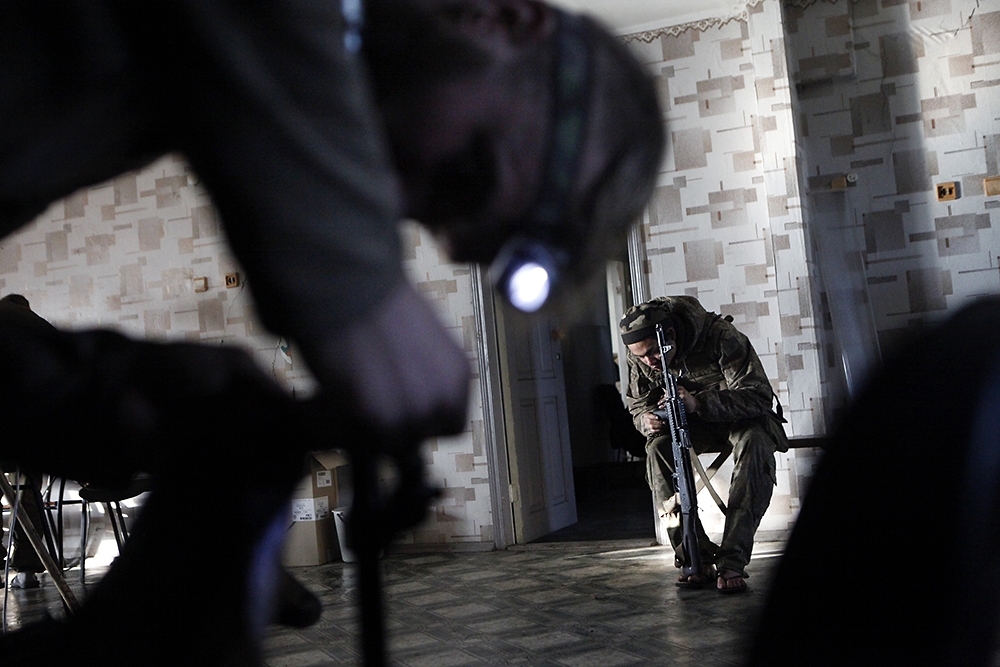 Charlie (right) and Craig clean and check their weapons after returning from the frontline. 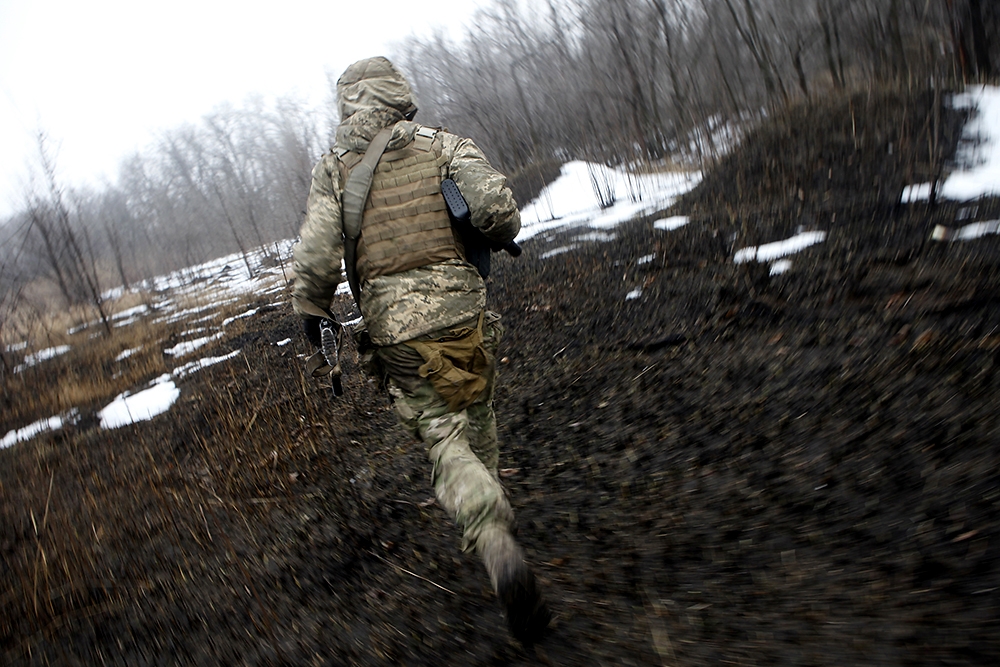 Charlie runs under enemy fire over a muddy field on an ammunition re-supply mission. 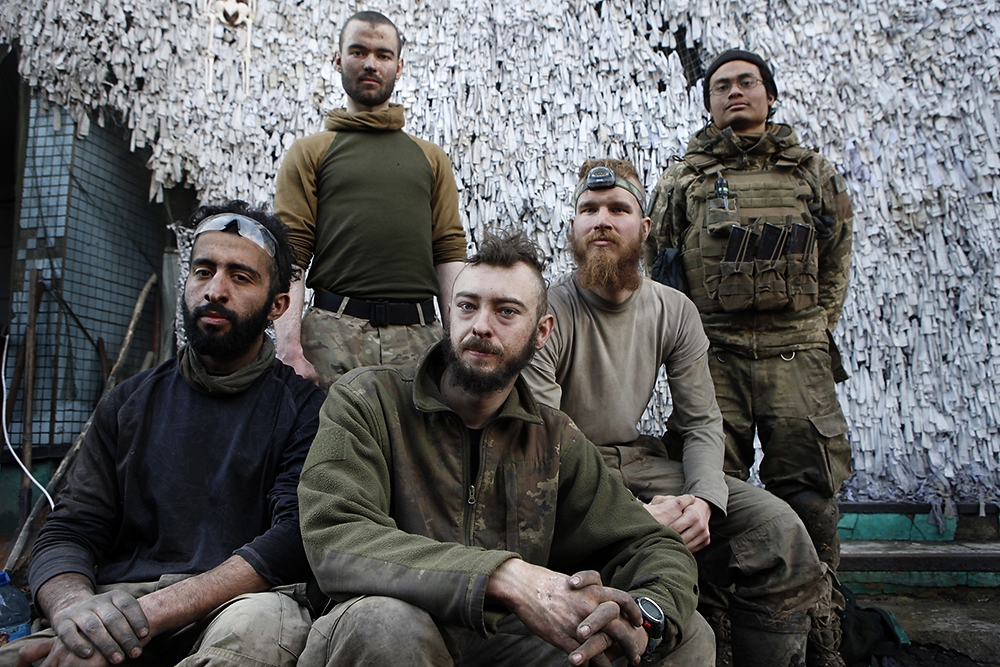 Fascinated by war and influenced by nationalistic beliefs, five volunteers left Europe and the United States to go fight in Ukraine. The military adventurers go by the names Ben, Alex, Craig, Charlie and Cowboy. They joined a unit operated by the right-wing militia Right Sector that fights alongside the Ukrainian army.

The foreign fighters cannot be called mercenaries: they received no pay, only shelter, food and ammo. They quickly forged a self-made battle group, which they called Task Force Pluto.

They were drawn to Ukraine not by politics, but by a desire to live dangerously. They want to be involved in live combat – not get their thrills through some video game. To them, they are living a dream of smoking guns, camaraderie and outdoor life. If there is a lull in the action in Ukraine, they might very well move on to another conflict zone around the world.

Task Force Pluto is a multi-national, multi-religious and multi-ethnic group.

Ben is a former soldier of the Austrian Armed Forces who has been travelling hot zones for years. He has seen action in Kosovo, Syria, Iraq and Ukraine.

Alex, another former Austrian soldier, deserted and fled the country in order to travel the world in search of armed combat.

Craig fought for almost six years in the US Army in Iraq and Afghanistan, but he got in trouble with the law after returning home. He evaded prison by going abroad.

Charlie was totally bored by his Californian routine in Silicon Valley, so he opted for a military lifestyle. He tried to enlist in the US Army, but was rejected. It was the same story when he tried to join the French Foreign Legion. But where there is a will, there is a way, and he eventually found there was a place for him on the frontlines in Ukraine.

Cowboy is another American who has had trouble with staying on the right side of authority. He got in trouble with American police only days before his US Army unit was to be deployed to Afghanistan. He also tried unsuccessfully to get into the French Foreign Legion. But he, like Charlie, got what he wanted in Ukraine after finding disappointment in France.