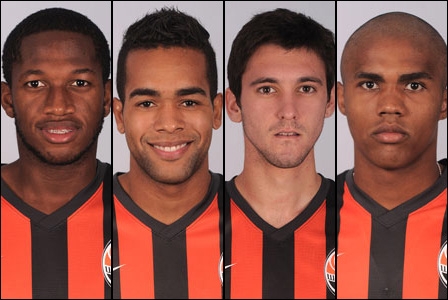 One of Ukraine’s most storied football clubs has become a casualty of the country’s separatist tumult. Six foreign-born players have abandoned Shakhtar Donetsk, leaving the defending Ukrainian Premier League champion short-handed on the eve of the start of the 2014-15 season.

The six players refused to board a team flight from France back to Ukraine following a 4-1 defeat in a friendly match against the French club Olympique Lyonnais. Five of the six are Brazilian -- Douglas Costa, Fred, Dentinho, Alex Teixiera and Ismaily. The sixth player is Argentine striker Facundo Ferreyra. Ukraine’s Premier League is scheduled to begin its new season on July 26.

While the players provided no public explanation for their actions, security concerns may well have prompted them to jump the team. The incident occurred just days after almost 300 people were killed when a Malaysian Airlines jet was downed by a surface-to-air missile in eastern Ukraine’s conflict zone, where Russian-backed separatists are battling Ukrainian government forces. Donetsk, the team’s home city, is the de facto capital of the separatist forces.

In a statement posted on the Shakhtar’s website, the club’s owner and president, Rinat Akhmetov, held out hope that the players would return to the team, adding that team officials have taken unspecified steps to guarantee the security of the players.

“Hopefully, the mind and heart will prevail over misunderstanding, and the players will not follow temptation and fear. Especially since there is nothing to fear,” Akhmetov said in the statement. “We are ready to provide security. We will not take risks and in any case we won’t bring players to dangerous places.”

The hazards facing the Shakhtar players were plainly evident on July 21, when heavy fighting erupted in and around Donetsk. Ukrainian government forces, backed by tanks, were reportedly trying to fight their way toward the city center, according to various news reports. Donetsk is situated roughly 50 miles from where the Malaysian jet went down. Ukrainian, US and European Union officials have accused separatists of launching the anti-aircraft missile that caused the tragedy.

Akhmetov indicated that Shakhtar will compete in the upcoming season, but won’t be able to play its home games in Donetsk for the foreseeable future. “We will play where we will be allowed to: we would like to do it in Kharkiv,” said Akhmetov, one of Ukraine’s richest citizens, with a net worth estimated at over $US15 billion.

Under Akhmetov’s stewardship, Shakhtar has been a perennial powerhouse in the Ukrainian league, having claimed nine championships in 23 seasons since Ukraine gained independence in 1991. In 2009, Shakhtar won the UEFA cup, given to the winner of a tournament of  top-tier European clubs. Shakhtar’s Romanian manager, Mircea Lucescu, is known to have a knack for developing young talent, especially players from Latin America.

As the team scrambles to persuade its AWOL players to return, Akhmetov hinted that he would neither release them from their contracts, nor agree to transfers unless Shakhtar got a fair return. “Players have contracts that they have to abide by. If they do not come, I think, they will be the first to suffer,” he stated.  “There won’t be clearance sale!”

A brief history of corruption in Ukraine: the Yushchenko era

A brief history of corruption in Ukraine: the Kuchma era