There is no reliable polling on views of the war, but there are plenty of supporters of Russia as well as opponents. 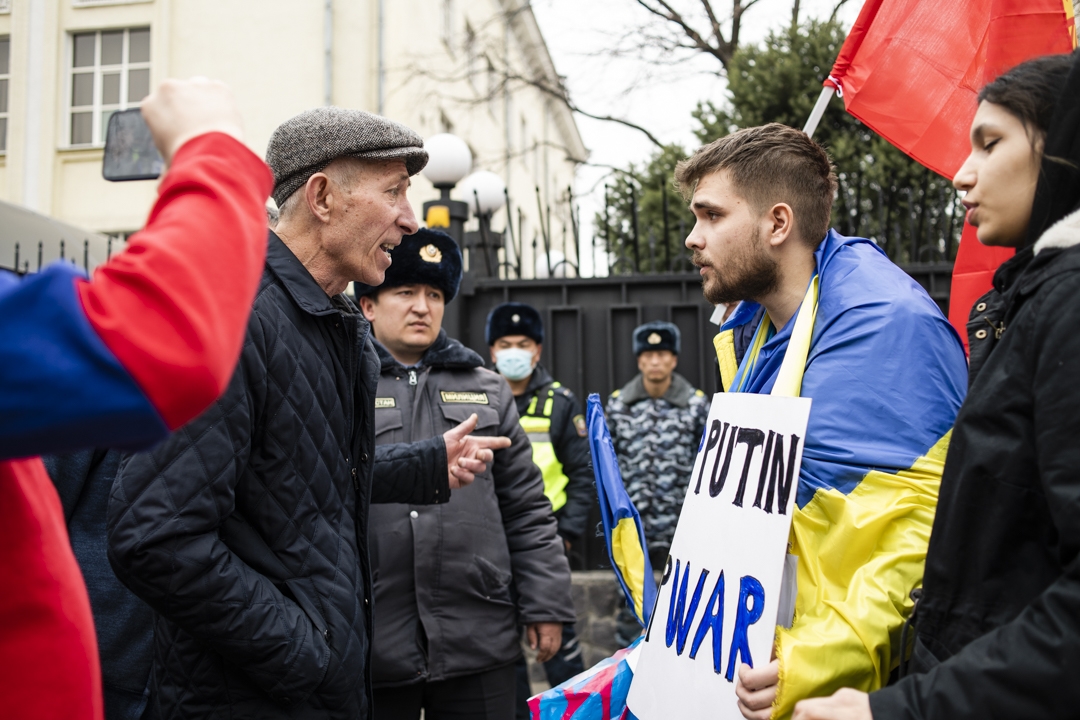 A rally against Russia’s war in Ukraine attracted thousands in the business capital of Kazakhstan over the weekend.

In Kyrgyzstan, a few dozen gathered outside the Russian Embassy in a gesture of support for bloodshed that organizers of the event insisted had been made inevitable by Ukraine’s insistence on defending itself against the incursion.

Public responses to the unfolding crisis in other Central Asian countries have been more muted. This is not least because they take a more repressive attitude to public protest, and in this case both local authorities and Moscow have signaled their unease at the adoption of overly pro-Ukrainian positions.

The March 6 protest in Almaty, in Kazakhstan, was given the green light by officials, but only on condition that participants assembled in an out-of-the-way location on a square behind the Sary Arka movie theater. The enthusiasm of the 3,000 or so demonstrators was nevertheless intense. A statue of Lenin was decked with the yellow-and-blue colors of the Ukrainian flag, as well as the sky-blue of Kazakhstan’s flag. People waved balloons and chanted “No to war!”

“I couldn’t fail to come out today, because what’s happened in Ukraine is unimaginable: attacking a country, an invasion, like Hitler’s in 1941,” said Dmitry Pak, a 38-year-old marketing specialist.

Protesters reserved most of their ire for Russia and its president, Vladimir Putin, whom they called a “fascist.” But the rally could arguably also be read as a critique of Kazakhstan’s own government, which has sought to tread a fiercely neutral position, appearing to fear both the ire of the Kremlin and being accused by the international community of abetting a war of aggression.

President Kassym-Jomart Tokayev is in an especially awkward position. When unrest in January threatened to tip the country into total chaos, he elicited the support of a peacekeeping force operating under the auspices of the Moscow-led Collective Security Treaty Organization, or CSTO. When Putin announced the start to the invasion of Ukraine last month, it felt like he might be calling in his own favor by alluding pointedly to “the help we gave Kazakhstan.” Kazakhstan has denied reports Russia has asked it to send troops to Ukraine.

Instead of taking sides, Tokayev is trying to play the peacemaker. Last week, he spoke by telephone within the space of one day with both Putin and Ukrainian President Volodomyr Zelenskiy. Nur-Sultan has abstained from UN Security Council votes condemning Russia’s military assault

There is no reliable polling in Kazakhstan on how public opinion views the war, but there are plenty of supporters of Russia as well as opponents.

The most immediate visual reminder of that these days are the “Z” signs some motorists have affixed to their cars to signal their support for Russia. That is the same letter that invading Russian troops have painted on the side of their armed vehicles. Kazakh authorities have taken a dim view of such gestures, however. Police have fined drivers displaying the “Z” signs for a “violation of the rules for using means of transport.”

Many ethnic Russians turned out in Almaty alongside Kazakhs and Ukrainians to protest against the war.

“Yesterday Georgia, today Ukraine, tomorrow Kazakhstan?” read a poster held up by one Russian woman, referring to Russia’s invasion of Georgia in 2008 and highlighting fears about the potential for Russian aggression in Kazakhstan, which is home to a large ethnic Russian minority.

“This situation affects Kazakhstan greatly,” said Aleksandra Rychkova, a 28-year-old artist who said she was alarmed about persistent claims in some Russian media “about the so-called destruction of the Russian language in Kazakhstan,” which she said was “simply not true.”

Protesters also chanted “no to propaganda” and collected signatures for a petition to ban broadcasting of Russian TV in Kazakhstan.

“If Putin has gone to save the Russians of Ukraine, we don’t know when he might come to us to save Russians,” said Rychkova. “It’s frightening. I’m a Russian Kazakhstani, I was born here, this is my country.”

In neighboring Kyrgyzstan, a few dozen people turned out at the Russian Embassy in Bishkek on the morning of March 5 to wave Russian flags, read supportive poems and lay flowers.

The organizer, the notoriously eccentric firebrand activist Toktayim Umetalieva, reprised lines frequently aired by Russian state television when she asserted that the incursion into Ukraine was being waged to defend the interests of Russian speakers. She cited the low-level conflict that has raged between government forces and Moscow-based separatists in Ukraine’s eastern Donbas region since 2014 as justification for the invasion.

“I support this necessary operation in honor of the memory of those children who died and of those who are dying now," she told Eurasianet.

“The main job of the president is to preserve peace. Zelenskiy was unable to do that,” he told Eurasianet. “Zelenskiy should have surrendered on the first day. He shouldn’t have involved anybody, he should have just said ‘please, welcome.’ Remember in France, when the Germans marched into Paris, there were no victims. They just went into Paris, and that was it.”

After lunch, a small crowd of pro-Ukraine demonstrators arrived outside the embassy. Some verbal sparring ensued between them and supporters of Russia. An elderly woman walking past accused the gathering of being Nazi sympathizers and tried to wrest their Ukrainian flag from them. Eventually, police arrived and detained the anti-war protestors.

Any such rallies would be impossible in Uzbekistan. Even overly engaged online coverage of the situation in Ukraine appears to be off-limits. Journalist Marina Kozlova has said that she received a warning note from officials to say that an interview with the Ukrainian ambassador that she published could be interpreted as an incitement to unlawful activities.

Russian state television, meanwhile, takes the view that Uzbek outlets have, if anything, been adopting excessively pro-Ukrainian positions, mainly by citing reports in Ukrainian and independent Russian media outlets.

“We have been contacted by viewers in Uzbekistan who have expressed concern that Russophobic hysteria propagated by bloggers and mass media could ultimately spill over into aggression toward Russians,” Robert Frantsev, an anchor on Rossiya-24, said in a segment aired on March 6.