Talks between the neighbors to reestablish diplomatic and trade links have taken on new urgency as Russia’s invasion spooks the region. 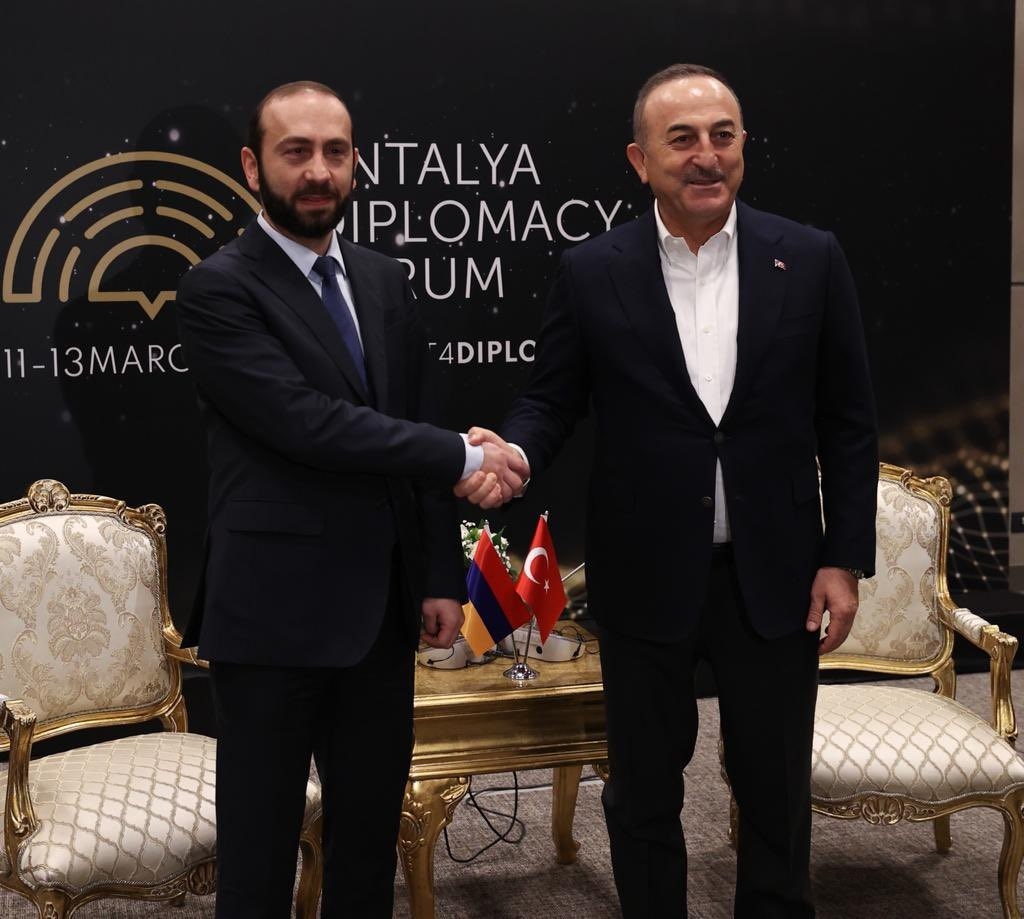 Russia’s invasion of Ukraine has given fresh momentum to efforts by Turkey and Armenia to establish diplomatic relations, as the war is forcing countries in the region to recalibrate their foreign policy priorities.

Armenia Foreign Minister Ararat Mirzoyan met his Turkish counterpart Mevlut Cavusoglu on the sidelines of an international conference in southern Turkey on March 12, the highest-level meeting between the two countries in a dozen years.

That was two months after the neighbors appointed special envoys to discuss normalizing a relationship embittered by Armenia’s conflict with Turkish ally Azerbaijan and the century-old genocide of Armenians in Turkey during the Ottoman era.

“We will continue to work for the normalization of our bilateral relations without preconditions,” Mirzoyan told reporters at the forum in Antalya. Cavusoglu said: “We are working for stability and peace in the South Caucasus, and we see support for our efforts from all sides. Azerbaijan is especially pleased with the steps we are taking.”

It was the first meeting between Turkey and Armenia’s top diplomats since the collapse of a 2009 U.S.-brokered peace process. It represents a remarkable shift from 2020, when Turkey strongly supported Azerbaijan in the war against Armenia, supplying arms and mercenary soldiers. The war ended in an Azerbaijani victory, in which it regained much of the territory in and around Nagorno-Karabakh that it had lost in the first war between the two sides in the 1990s.

In contrast to 2009, when it opposed normalization, Azerbaijan this time supports the rapprochement between Turkey and Armenia. Separately, Cavusoglu said Mirzoyan told him Armenia “wants to begin peace agreement negotiations with Azerbaijan.” He added: “Even just beginning talks will be an important step.”

Since the 2020 ceasefire, sporadic violence still afflicts Nagorno-Karabakh, predominantly home to ethnic Armenians but internationally recognized as part of Azerbaijan, as well as the border between Armenia and Azerbaijani. But both Baku and Yerevan have indicated progress in recent weeks on preparations for negotiations on demarcating their border.

Russia’s incursion into Ukraine in late February has given new urgency to peace efforts between Turkey, Armenia and Azerbaijan, analysts have said.

The Ukraine conflict has made “Russia more likely to flex its muscle in the post-Soviet space and gives Moscow less incentive to greenlight these processes” between Turkey, Armenia and Azerbaijan, Asli Aydintasbas, a fellow at the European Council on Foreign Relations, said at a March 14 briefing.

“Though never declared, they are pushing back against Russian influence in the area, with the understanding that normalizing relations and economic ties will make each other stronger in the Caucasus,” she said.

Already, 2,000 Russian peacekeepers are in Nagorno-Karabakh, a further expansion of Russia’s military footprint in the South Caucasus. Russia has long kept a military base in Armenia, which has largely stood by its closest ally during the Ukraine conflict, even as other former Soviet republics like Moldova and Georgia have been rattled by the specter of a revanchist Russia.

Moscow’s lack of robust support for Yerevan during the war over Nagorno-Karabakh has revealed the risks of overdependence, and the Ukraine conflict has led some to worry that “the existential threat to Armenia is now from Russia,” said Richard Giragosian, director of the Regional Studies Center, a think tank in Yerevan. “In the event that Russia turns against normalization, [Armenia] wants to move even faster.”

Likewise, Azerbaijan President Ilham Aliyev worries about Russia playing the role of spoiler in the region, said exiled Azerbaijani rights activist Emin Milli, chairman of the Restart Initiative. “The situation in Ukraine has opened up a fear of Russia in Azerbaijan, giving it extra incentive to support [talks] between Armenia and Turkey.”

For its part, NATO member Turkey has walked a diplomatic tightwire between Ukraine and Russia, selling combat drones to Kyiv but refusing to sanction Moscow. It argues that its good ties with both countries puts it in an ideal position to facilitate a political resolution of the conflict.

“Russia has diminishing returns in letting this process go forward [especially] if Turkey were to pivot more to the West and NATO,” Aydintasbas said.

Despite the key role it played in the 2020 war, Turkey found itself sidelined by Russia in the South Caucasus after the end of the fighting. Improving ties with Armenia represents “a chance to regain a seat at the table in regional trade and transport,” Giragosian said.

Cavusoglu’s meeting with Mirzoyan is part of a broader diplomatic offensive by Turkey as it seeks to repair relationships across its neighborhood, including with European Union countries, Israel, Egypt, the UAE and Greece. An aggressive foreign policy in recent years had left Ankara isolated and sanctioned by the EU and the U.S. Congress, but a severe economic slowdown has spurred President Recep Tayyip Erdogan to reach out to former foes.

For now, the talks between Turkey and Armenia are focused on accrediting ambassadors for each other’s countries, rather than re-opening embassies, and opening just two crossing points at the border for trucks and passengers, Giragosian said. More painful matters, especially reconciliation over the genocide of up to 1.5 million Armenians during World War I, remain a distant prospect. Turkey denies the massacres amounted to a genocide.

“If your ultimate goal is to open the border, you can do that. There must be an understanding from Ankara and Yerevan that this is a window of opportunity and they must move faster than they may be prepared,” Aydintasbas said.