Is political will enough to uproot a deeply engrained culture? 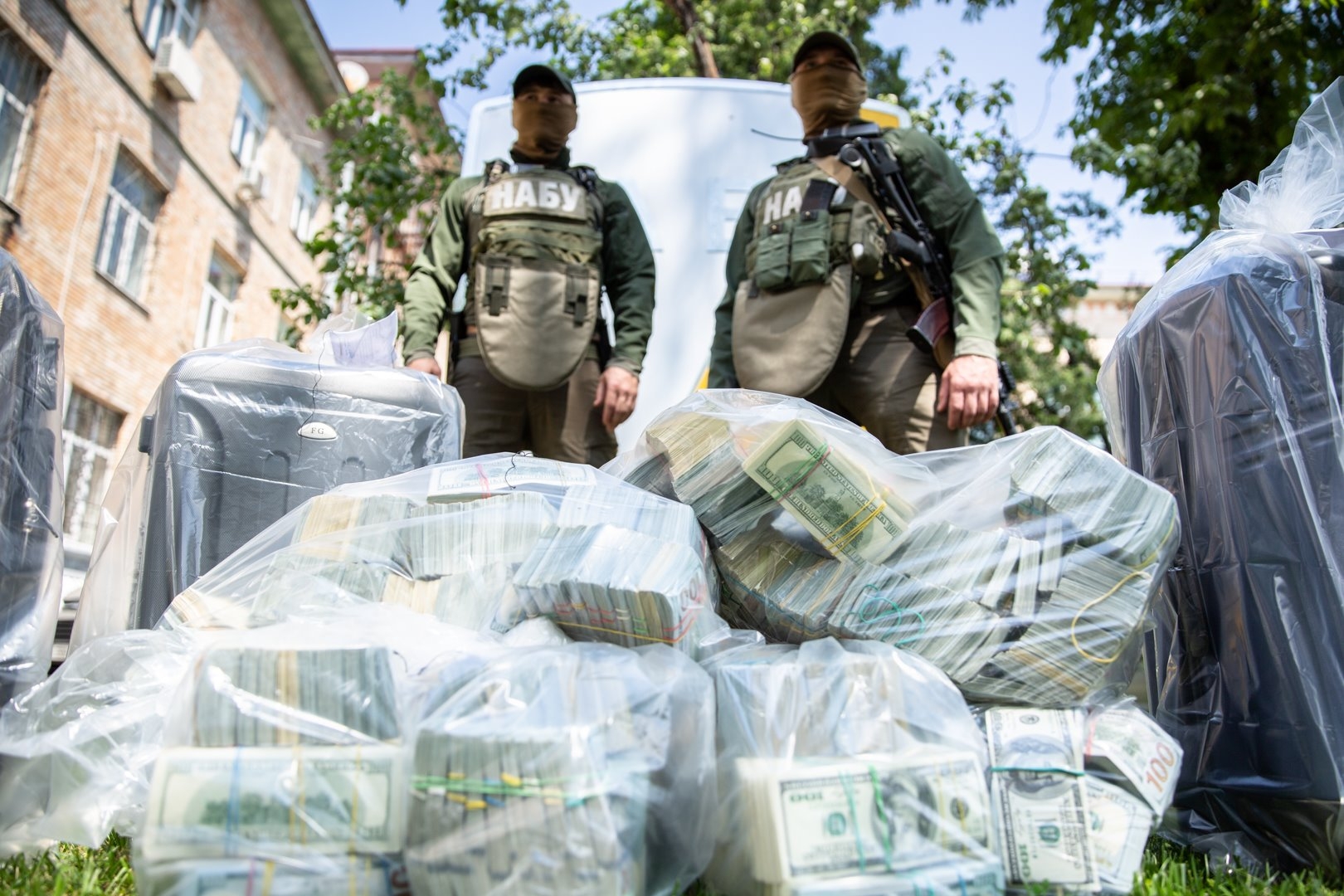 A Russian troop buildup is boosting anxiety about Ukraine’s sovereignty, but the central threat to Kyiv’s reform ambitions – the corrosive effect of grand corruption – comes from within. And more than seven years into Ukraine’s democracy rebuilding project, few would say Ukraine’s fight against graft is going smoothly.

In the years since the 2014 Euromaidan uprising prompted Ukraine’s political direction to shift westward, two consecutive Ukrainian presidential administrations have drawn criticism for either failing to adequately tackle graft, or even perpetuating it. Meanwhile, corrupt actors continue to take advantage of the country’s weak judicial system to further their own interests, partly by attacking the fledgling anti-corruption infrastructure that’s earned Kyiv international praise.

Yet advocates still see hope for Ukraine’s anti-corruption drive and plead for patience in assessing its progress. Despite massive pushback against institutions such as the National Anti-Corruption Bureau of Ukraine (NABU) and the High Anti-Corruption Court (HACC), experts say a string of measured successes have established an important foundation for the future.

“From my point of view, we have more positive than negative experiences,” says Andrii Borovyk, executive director of Transparency International Ukraine.

With Ukraine’s democracy hanging in the balance, as well as a population that remains deeply distrustful of state structures, maintaining momentum is imperative. So is pursuing additional reforms: Declaring anything close to victory over corruption will be impossible without overhauling the broken judiciary, a linchpin of the old system.

So far, President Volodymyr Zelensky has committed to that cause. But even if his administration has the political will to follow through, it remains to be seen whether it will be enough to uproot a deeply engrained culture.

The relative success of Ukraine’s anti-graft effort has been obscured by what Borovyk says are the lofty expectations of Ukrainians when it comes to reform. Many hope for speedy change, when, in reality, fighting corruption in Ukraine is a slow and steady march that is only beginning to gather pace.

For one, the appropriate infrastructure was only recently put in place. The September 2019 launch of the highly anticipated HACC concluded a years-long process that began with the establishment of NABU, the ProZorro procurement system and electronic asset declarations throughout 2015 and 2016. Upon closer inspection, each instrument has produced a series of achievements.

Take NABU, which in its first few years has sent 300 cases to court and obtained 50 convictions. Currently, some 800 investigations are underway. One of its latest key moves came last month, when officials charged three top former managers of PrivatBank, the notorious lender owned by Ihor Kolomoisky, one of Ukraine’s richest citizens, with embezzlement.

The case against PrivatBank, which was nationalized in 2016 after officials discovered $5.5 billion missing from its balance sheet, has been a focal point of international pressure on Kyiv to clean up. In targeting former bank insiders, NABU is in the vanguard of what observers say is Zelensky’s offensive to curb oligarch influence and curry favor with Washington.

Elsewhere, the 38-judge HACC is working to punish dishonest officials and judges at the local and regional levels across the country. Several years in the making, and created with assistance from international experts, the court fields cases from NABU and the Specialized Anti-Corruption Prosecutor’s Office, earning a reputation for professionalism and efficiency.

It has handed down more than two dozen convictions and created an important precedent by setting hefty sums for bail in some cases involving high-profile defendants, according to Olena Shcherban, chief legal expert at the Anti-Corruption Action Center in Kyiv. “All other courts had been afraid to even consider such measures earlier,” she says. In doing so, it also secures cash judgements that are funneled directly into the state budget.

Meanwhile, the e-declaration and ProZorro systems are the most prominent steps yet at ensuring transparency within the state bureaucracy, affording Ukrainians an extraordinary look at the backgrounds and dealings of bureaucrats.

This year, nearly 800,000 officials submitted their annual declarations to a searchable universal register. And statistically speaking, ProZorro has produced perhaps the clearest measurable impact of all: According to CEO Vasyl Zadvornyy, the award-wining procurement system, which is used in determining state contracts for everything from medical supplies to road construction, saved the Ukrainian state nearly $2 billion last year.

Besides guaranteeing a level of transparency in a once-opaque process, Zadvornyy said the system is also a testament to the country’s technical prowess. “We have something to be proud of,” he wrote on Facebook on April 2, “because ProZorro is a 100 percent Ukrainian product.”

Such signs of progress come despite the continuing existence of widespread corruption within the judiciary. Courts in some cases have actively sabotaged reform efforts.

Last autumn, for example, Ukraine was plunged into crisis after the Constitutional Court effectively ruled NABU illegal and stripped e-declarations of their legal weight. Ukrainian activists allege those decisions were orchestrated by Viktor Medvedchuk, a close Vladimir Putin ally, and Kolomoisky – two tycoons seemingly interested in preserving their wealth and keeping Western influence (as well as the transparency it brings) at bay.

Lawmakers pushed through legislation reinstating the legal liability for false asset declarations. But the larger question of how to impose checks and balances on one of the most powerful courts in the land remains unanswered. In a bid to showcase his assertiveness, Zelensky last month dismissed its chief justice, Oleksandr Tupytsky, and one other judge by decree, a move some critics say was legally dubious.

Meanwhile, the HACC has been hamstrung by the High Council of Justice (HCJ) another institution that Shcherban contends has been captured by corrupt interests. Responsible for monitoring the performance of the country’s judges, the HCJ is instead widely perceived by reform advocates as abusing its disciplinary powers to improperly influence anti-corruption cases. For example, the HCJ officially reprimanded a HACC judge who attempted to compel the notorious head of a politicized Kyiv court to show up for hearings in a case against him.

Following an investigation by NABU, that official, Pavlo Vovk, stands accused of attempting to establish control over the HCJ. He is currently evading summonses. In early April, authorities arrested Vovk’s brother for allegedly taking a $100,000 bribe on his behalf.

Leaving the HCJ to its own devices, Shcherban says, would mean “a real risk that they’ll just start firing the judges who can’t be pressured in any other way.”

That’s why local activists and Western diplomats alike are urging the Ukrainian government to finally commit to meaningful judicial reform, a process that’s been in limbo for years. Experts say the priorities should include overhauling the HCJ and rebooting the High Qualifications Commission, another state body that has stalled. Such changes are needed to ensure professionalism and integrity in the judiciary.

Zelensky has repeatedly pledged in recent weeks that both measures, among a raft of others, are part of his imminent judicial reform strategy for the next two years. Leading legal experts have already criticized his plan as vague and poorly conceived, though some might take heart in the president’s submission this week of a bill finally dissolving the controversial Kyiv court over which Vovk presides.

Still, others point to a sobering reality: Judicial corruption is a deeply systemic phenomenon in which many actors have a stake.

“The state apparatus in general – law enforcement, the presidential administration, the Cabinet of Ministers, parliament – is not ready to have a real independent judiciary because no one wants to play by the rules,” says Serhiy Verlanov, a former head of the State Tax Service of Ukraine and a trained lawyer.

Given the prevailing circumstances, on top of the decades of rot experienced by state institutions, it’s no surprise that Ukrainians want quick results. The challenge for reformers, however, is that there are no easy fixes.

Changing public attitudes also pose a challenge. According to a recent USAID-sponsored poll, 54 percent of respondents believe it’s “impossible to live completely according to the law.” Perhaps even more worrying, 68 percent said they were “willing to give power to a strong leader” capable of establishing “order” in the country.

“People believe in some kind of king or tsar who will come and solve all their problems,” says Borovyk, of Transparency International. “But this will never happen within one, two or three years.”

Complicating things for reformers is the strong anti-Western stance adopted by media outlets and lawmakers loyal to Medvedchuk and Kolomoisky. These affiliated entities and individuals have stirred discontent by depicting Ukraine as a slave to Western governments and organizations such as the International Monetary Fund, which has helped keep the country’s economy afloat.

With the recent election of Joe Biden, Kyiv has seen an ally reemerge in Washington. The Biden administration has already broadcast its support both symbolically, exemplified by a recent telephone call between the two presidents, and in substance, by sanctioning Kolomoisky over unspecified corruption in Ukraine.

With three years left in his term, Zelensky, along with his parliamentary majority, still have ample time to press ahead with substantive changes, says Verlanov, the former State Tax Service chief. But there is no time to lose, and little margin for error.

In the meantime, reformers should continue preparing for serious pushback: “There will always be people who will be unhappy with the anti-corruption infrastructure,” says Borovyk. “Especially if it’s doing what it’s supposed to do.”