A standoff between Ukraine’s new president and its richest man could set the stage for serious structural reforms – or guarantee Ukraine remains trapped in its decades-old malaise. 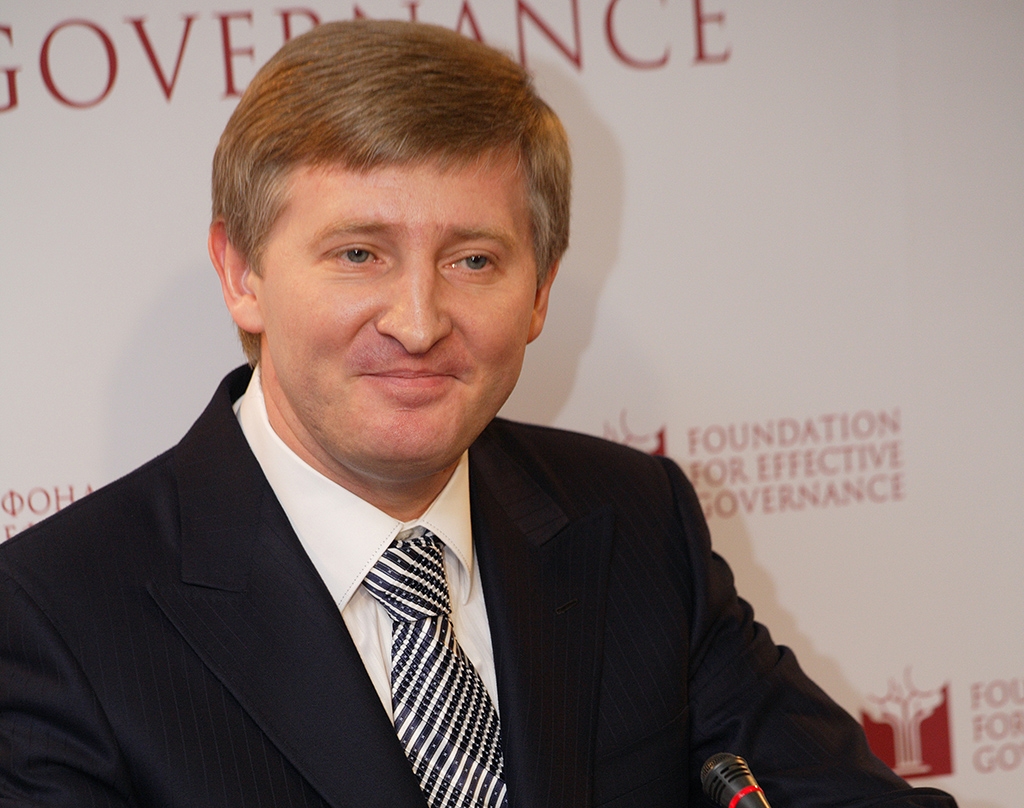 Few people better embody Ukraine’s struggle with vested interests than industrialist Rinat Akhmetov. Revolutions in 2004 and 2014 hurt his bottom line, but Akhmetov is still Ukraine’s richest man. He is a survivor, a wily figure who has become synonymous with Ukraine’s dependence on its oligarchs.

The young administration of President Volodymyr Zelensky has suggested it hopes to reign in Akhmetov’s business empire. How this potential standoff is resolved could set the stage for serious structural reforms – or guarantee Ukraine remains trapped in its decades-old malaise.

Exploding onto the scene

For the post-Soviet rich, the 1990s produced both carefully sculpted legends and reasons to obfuscate.

Akhmetov’s rise during these years in eastern Ukraine’s industrial and coal-mining Donbas region is also foggy, but the 53-year-old’s beginnings are often linked to October 15, 1995, when a bomb at Donetsk's Shakhtar football stadium killed Akhat Bragin. An ethnic Tatar like Akhmetov, Bragin was seen as the region's mafia boss. Akhmetov succeeded Bragin as chairman of the football club. He is alleged to have then taken over Bragin’s local business interests including the Lyuks Corporation – identified by Ball State University historian Sergei Zhuk as “the first official firm to legalize the criminal activities of the Donetsk Mafia” – setting him on his path to wealth and power. 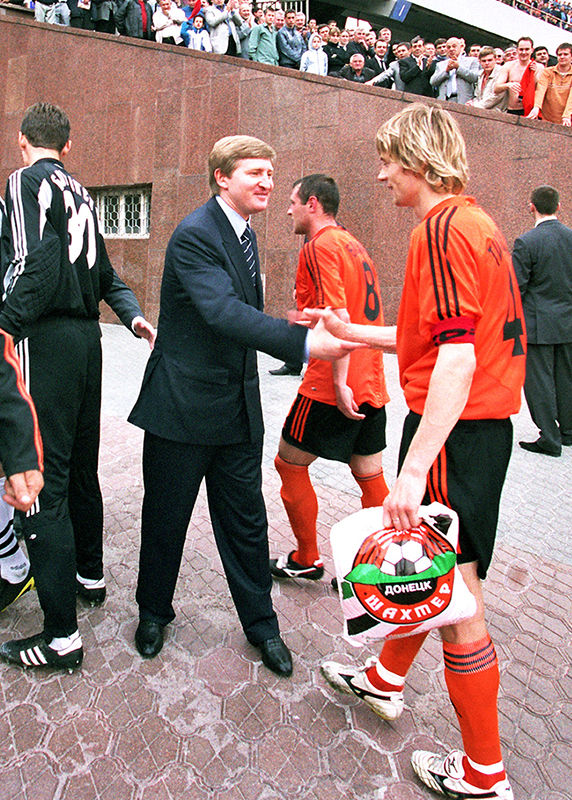 A Russian national, Vadim Bolotskikh, was convicted in 2003 for Bragin's killing, according to a ruling upheld that December by Ukraine's Supreme Court.

Akhmetov spent most of the next decade cultivating the loyalty of Donetsk residents with investments in Shakhtar, while expanding his business interests across the country.

Throughout his business dealings, Akhmetov has never been charged with a crime.

His place on the national stage was established in 2004 when he joined forces with Viktor Pinchuk, son-in-law of then-President Leonid Kuchma, to submit a winning $800 million bid for steel giant Kryvorizhstal.

The deal was not only approved by Kuchma, but signed off by then-Prime Minister Viktor Yanukovych, a Donetsk native like Akhmetov who was running for president at the time and widely considered Kuchma’s preferred successor.

The privatization of state enterprises at cut-rate prices was one of many afflictions in post-independence Ukraine, but the blatantly profiteering Kryvorizhstal deal helped fuel outrage ahead of the Orange Revolution. Even before their winning tender was announced, Yanukovych’s main rival, Viktor Yushchenko, warned that "Any [parliamentary] deputy will tell you who wants to buy this company. Don't be surprised if their last name ends with "-chuk," a reference to the president’s son-in-law.

Elections in late 2004 looked, at first, like a personal failure for Akhmetov. Opposition leader Yushchenko was poisoned; fraud during the November runoff kickstarted the Orange Revolution. Yushchenko won a redo that December and the new authorities seized Kryvorizhstal. Months later the government sold the plant to Mittal Steel (now ArcelorMittal) for $4 billion more than Pinchuk and Akhmetov had paid.

Yet Akhmetov – who had, some believe, patronized Yanukovych’s campaign – would soon emerge a dominant political player.

Yanukovych returned as prime minister in 2006 as head of the Party of Regions. At the same time, Akhmetov won a seat in parliament – gaining immunity from criminal charges. American diplomats believed he occasionally clashed with other oligarchs influential in the bloc – most notably Dmytro Firtash. But these party grandees did agree on at least one thing: hiring Western consultants, ranging from McKinsey to Paul Manafort, who later became Donald Trump’s presidential campaign manager and was eventually jailed on charges related to his work in Ukraine.

Akhmetov’s reported fortune exploded after Yanukovych assumed the presidency in February 2010. During the Yanukovych administration, Akhmetov set about expanding mining and energy firm DTEK and the steel conglomerate Metinvest, which are controlled through his holding company System Capital Management, or SCM.

DTEK would go on to buy stakes in regional Ukrainian energy companies from Dnipropetrovsk to Crimea to Lviv – the distant regions demonstrating and cementing Akhmetov’s nationwide influence. These were largely done through partial share sales in which DTEK was often the sole bidder. For example, the 2011 sale of a stake in Kyivenergo and a series of other related assets gave him full control over the capital’s energy market. By the time the Euromaidan uprising began in late 2013, Akhmetov had taken effective control of a lion’s share of Ukraine’s power networks, with branches in coal mining, electricity production and power distribution.

Protesters denounced Akhmetov as Yanukovych’s gray cardinal, demonstrating outside the Kyiv offices of his companies and even confronting him at home in Donetsk. Analysts at the time predicted that the post-Maidan government would target his interests. The swell of popular anger did lead to investigations that seemed to make good on the Euromaidan's promise to combat Ukraine's kleptocracy. Yet even while armed factions began to assert themselves in the Donbas, seizing Akhmetov’s Yenakiieve Steel and forcing his beloved Shakhtar to play elsewhere in Ukraine, assets in other regions allowed Akhmetov to retain his status as, according to Bloomberg and Forbes, Ukraine’s richest man. Ultimately, this helps explain his at-the-time-surprising decision to back the Ukrainian government that had been brought to power by protesters calling for an end to Akhmetov-style business.

In fact, Akhmetov proved himself invaluable to the new authorities, who lost control of the port city of Mariupol that May. Mariupol is home to two of Akhmetov’s largest assets, the Ilych Iron and Steel Works and Azovstal. He ordered his workers to reassert control in the city, aligning himself with Kyiv. He would go on to supply aid to the areas seized by Russian-backed separatists, angering some Ukrainian nationalists, but keeping the region’s industry from further collapse and placating the government in Kyiv.

Investigations initiated under the post-Euromaidan government of Petro Poroshenko rapidly ground to a halt in the courts. In 2017, DTEK and Metinvest’s creditors agreed to restructure their debts. Not one of Akhmetov’s firms’ privatizations has been unwound since the revolution. At the start of 2019, DTEK bought stakes in two more regional energy companies, including Kyiv’s, and is rumored to be pursuing more.

Today, Akhmetov is seen by most observers as having misjudged the July 2019 elections – a mere seven MPs considered loyalists now sit in parliament, the Verkhovna Rada.

Rivals charged that Akhmetov would bribe Verkhovna Rada deputies from President Zelensky's Servant of the People Party to make up for the setback. While Ukrainian deputies have long been dogged by corruption allegations, no concrete evidence links Akhmetov to financial malfeasance, though such claims have caused some tensions within the ruling party. Akhmetov remains a symbol of the kleptocracy that besets Ukraine, however, and taking even token action against him could shore-up support for the government. In August Bloomberg reported that Zelensky would challenge his influence.

That month, Zelensky’s administration launched price fixing probes into DTEK. Another investigation is scrutinizing Akhmetov’s alleged profiting from assets in Russian-occupied Crimea, a violation of Western sanctions. SCM denies this. There are also rumors that Akhmetov is once again sparring with another powerful oligarch, Ihor Kolomoisky, whose ties to Zelensky have attracted attention. In December Akhmetov launched a new television station, which ex-MP and journalist Serhiy Leshchenko warned would be used to whitewash Akhmetov’s reputation as investigators gather material.

Yet Kolomoisky’s own words in a 2015 interview highlight why a small number of oligarchs support each other, even when their squabbles spill over into politics: “Akhmetov and I need to take care of each other, because if he goes, they’ll come after me. And if I go, they will come after him.”

**Correction: An earlier version of this story said the Bragin murder remains unresolved.