Georgia has launched an all-Ukrainian school for the children fleeing war in Ukraine. 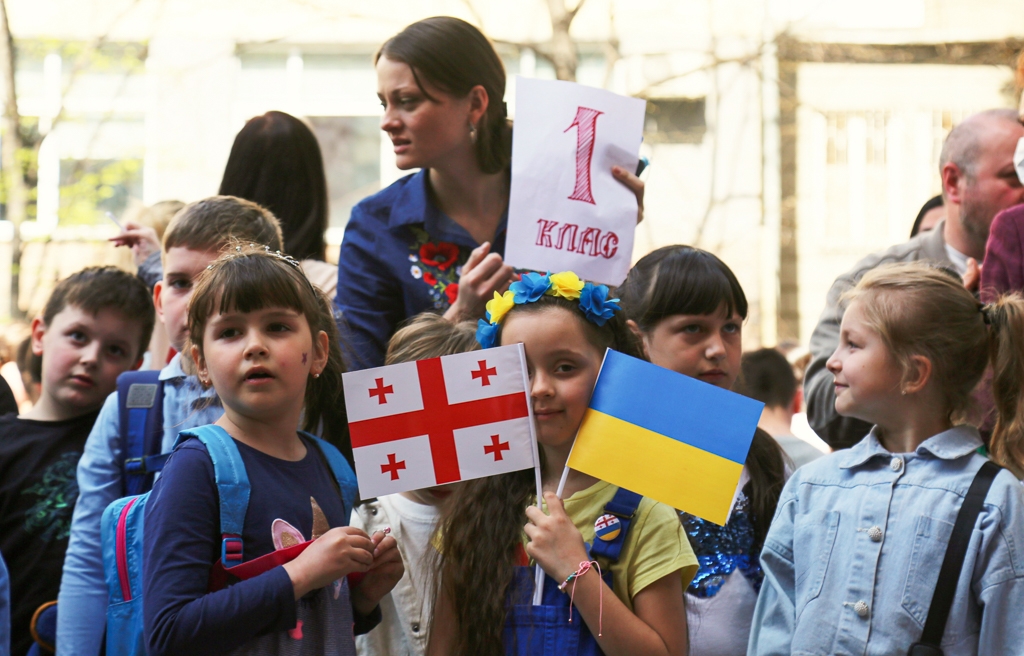 A chittering crowd of children wearing traditional Ukrainian vyshyvankas and vinoks (embroidered shirts and floral wreaths) poured into the schoolyard. Festively attired teachers rushed around to herd them into groups, while parents snapped photos of the special moment in their children’ lives: the start of a new school year.

Inside, their new classmates were waiting to greet them with balloons and flags, both Georgian and Ukrainian. The new pupils, numbering approximately 100, were displaced from their homes in Ukraine by the Russian invasion.

Now, just six weeks since the war began, a group of displaced Ukrainian educators, along with Georgia’s Ministry of Education, has launched a Ukrainian-language school, hosted by Public School 41 in central Tbilisi. It will teach the standard Ukrainian school curriculum in the Ukrainian language to kids across all grades.

“I can’t thank enough the administration of School 41. It is not easy to take in 100 children and also a group of new teachers,” said Olena Kukharevska, a school principal from Kyiv who teaches physics and heads the new school, at the April 11 opening ceremony.

As Kukharevska spoke, teachers – some of them also war refugees, and others Ukrainian expats who had already been living in Tbilisi – stood holding up the numbers of classes they were going to teach.

“The teachers’ mission here is not just to give an education, but to bring together children from different parts of Ukraine who are now scattered around Georgia, help them make friends with each other and with the Georgian children,” Alla Timoshenko, who will teach beginner-level math and Ukrainian language, told Eurasianet. 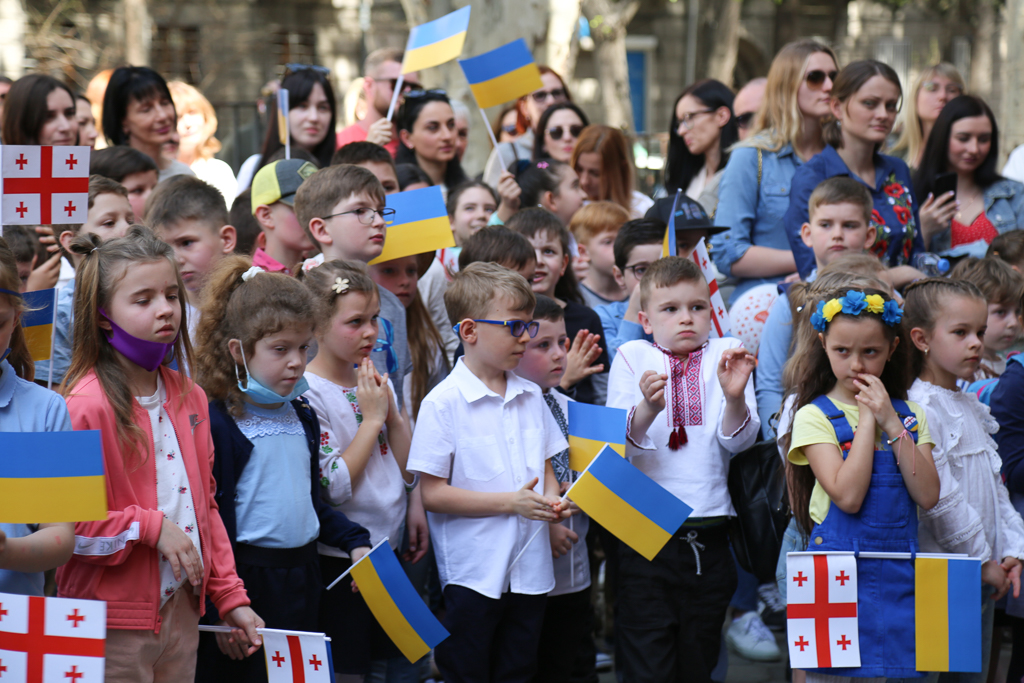 Since the beginning of the war, more than 4.5 million Ukrainians have fled the country. An estimated 25,000 of them have made it to Georgia, where they have found many people eager to help.

Despite the mid-April date, the Georgian staff tried to create the festive mood characteristic to the start of a school year in this part of the world. The school building was decorated with balloons; teachers and other personnel wore scarfs, headdresses, or brooches in the blue and yellow colors of the Ukrainian flag.

“This is a bittersweet moment for us,” one Ukrainian mother told Eurasianet at the opening. “My youngest son’s very first day in school is going to be here. I always imagined this day would come in our neighborhood at home in Kharkiv, but I don’t think my neighborhood exists anymore.”

“At the same time, I’m incredibly touched by the Georgians doing this for us. It’s so moving to see how everyone is trying so hard to make the kids happy,” she added. “I hope the children will ultimately remember people’s kindness, not war and explosions.”

Before the kids entered the building, music teacher Olga Rabba, a refugee from the Donbas region, took a microphone to sing Oi u luzi chervona kalyna (Oh, the Red Viburnum in the Meadow), an early 20th-century patriotic Ukrainian tune that has become an anthem of Ukraine’s resistance to the Russian invasion. After she finished, Georgian Education Minister Mikheil Chkhenkeli took two children by their hands and walked them into the school.

The Georgian government is footing the bill for the school and will pay the Ukrainian teachers the standard Georgian teacher salaries. While the curriculum will be identical to that they had been following at their home schools in Ukraine, the students will also study Georgian as a foreign language to help them integrate with their new Georgian schoolmates.

The Ukrainian students will study in the afternoon and evening, in a second shift after the Georgian students are done for the day.

“The school is a significant new expense for Georgia’s education system, which has plenty of its own needs, and it also must be hard on the school administration – children in the morning, children in the evening – but they have been incredibly open,” Kukharevska, the new headmaster, told Eurasianet.

The idea of a Ukrainian school in Tbilisi emerged when Kukharevska, who ran a private high-tech school in Kyiv, arrived in Georgia in mid-March.

“After the war began, we would sit every day in the cellar of my school in Kyiv,” she recalled. “The entire neighborhood would gather there during airstrikes and we cooked food for everyone.”

As security worsened, Kukharevska, a handful of teachers and the coach of the diving team drew up a plan to take the children out of Ukraine. “A German sports school agreed to take in these children, so we filled up the cars – fortunately we still had gas – and drove them to Poland,” she said. “I have lots of sources in schools all around Ukraine, so everywhere we went on the way I would get in touch with local schools and they would let us spend the night or hide from airstrikes.”

The group eventually dropped off their cars near the border and crossed into Poland on foot. Once in Germany, “the teachers bade farewell to one another and scattered in different directions,” Kukharevska said. She headed to Georgia because she had friends who were offering to help.

When Ukrainian diplomats in Tbilisi learned she was a school principal, they asked her to try organize a school for refugee children.

She tested the waters by posting a sign-up sheet for a potential Ukrainian school on a Facebook page for Ukrainians in Tbilisi. “It filled up with dozens of applications almost immediately,” she said.

School 41 was chosen because it is named after early 20th-century Ukrainian statesman, Mykhailo Hrushevsky, and briefly held classes in the Ukrainian language about a decade ago. But the classes were suspended due to lack of demand: At the time, much of Georgia’s then-small Ukrainian diaspora preferred Russian-language schools.

“Now even those parents are switching back and placing their kids in the Ukrainian classes,” Kukharevska said. “A few of the kids enrolled in our school are not new arrivals in Georgia, but come from Ukrainian families who have been here for some time.”

“This is a part of the national awakening that we are now seeing everywhere,” Kukharevska said. “The war became a brutal reminder that we are all Ukrainians and, no matter where we are, we should study in our own language.”