Most of the countries Eurasianet covers were involved in the airlift. Some even contributed troops during the 20-year war. 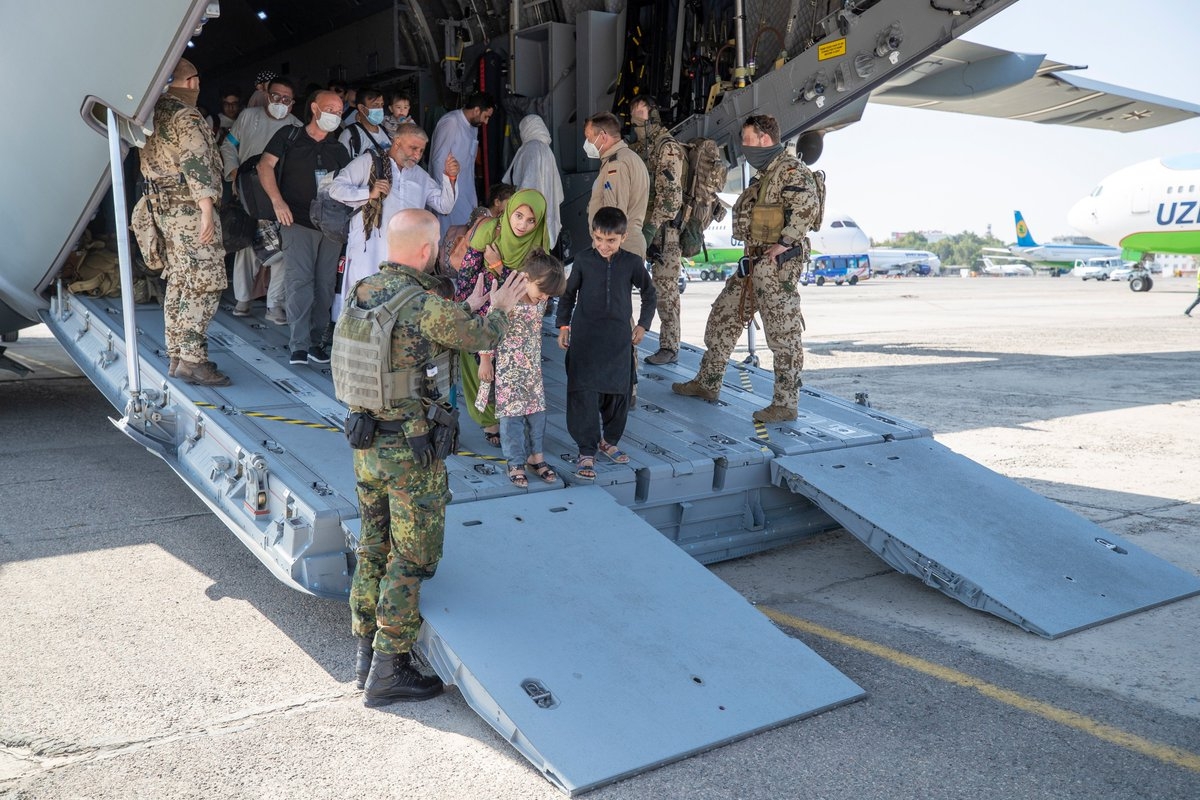 Whatever help governments in Central Asia are extending to Afghan refugees, they are not eager to make it known publicly.

In the days after the fall of Kabul to the Taliban, media in Uzbekistan reported that around 750-800 Afghan nationals had been taken in. Of those, around 100-150 were accommodated in a tent camp near the border. Another 600 or so people identified as fugitive air force pilots, crew and family members were placed in a COVID-19 quarantine facility in the city of Termez.

On August 20, however, the Foreign Ministry published a statement to say 150 Afghan citizens had voluntarily returned to their homeland. The ministry said it had reached an agreement with the Taliban that the returnees would not be mistreated.

The Wall Street Journal has since reported that the pilots and their families too are poised for repatriation if a third country does not take them soon.

Uzbekistan has been busier assisting as a transit zone for departing foreign nationals and refugees headed out of Afghanistan. The German Air Force used an airport in Tashkent to move some 5,300 people from 45 countries out of Afghanistan in an operation that ended on August 26. On August 30, Uzbekistan’s Foreign Ministry emphasized that the land border with Afghanistan was closed and would remain so for the foreseeable future.

Before the Taliban’s near-complete capture of Afghanistan, officials in Tajikistan were suggesting they could, if needed, take in anywhere between 10,000 and 100,000 refugees.

The Interior Ministry said 700,000 square meters of land had been set aside for the construction of temporary accommodation across a handful of districts. As yet, however, no work has been done on building any of those facilities.

Tajikistan has like Uzbekistan rendered itself available as a transit point. Around 2,000 Afghan nationals have been flown out of Afghanistan through Tajikistan to third destinations.

Around 5,000 or so Afghan military personnel have been sent back to Afghanistan, however, since early this summer.

The flight from Afghanistan long preceded the Taliban’s final victory. A representative of the Afghan embassy in Dushanbe told Eurasianet that the mass flight began after NATO-led troops announced plans for their exit from Afghanistan.

In March, the private Afghan airline Kam Air started a direct flight from Kabul to Dushanbe – 80 percent of the passengers were refugees arriving on tourist visas, the embassy representative said. Around 3,000 Afghans entered the country in that manner, he said, before the flight was suspended, ostensibly over COVID-19 concerns.

As of this month, there are 10,000 Afghan refugees in Tajikistan, according to the embassy, although their exact identity and location is hard to determine. Some likely arrived years ago.

On September 1, Interior Minister Ramazon Rahimzoda met with the UN High Commissioner for Refugees representative in Tajikistan, Mulugeta Zewdie. Rahimzoda used the encounter to chide the UN for failing over a 20-year period to provide practical assistance in creating infrastructure for receiving refugees. It was this, said Rahimzoda, that prevented Tajikistan from doing more.

Those countries have, despite their reluctance, done far more than either Kazakhstan or Kyrgyzstan.

After initial indications that Kazakhstan might admit refugees, officials there had a hasty rethink. Preparations made at locations in the southern city of Shymkent around mid-August sparked a swell of indignant gossip-mongering on social media. Rumors that Kazakhstan might be taking up to 70,000 Afghan refugees quickly did the rounds.

The Foreign Ministry was prompted by that speculation to tamp down the whispering campaign by denying on August 15 that any such plans existed.

Kazakhstan has not formally refused to accept Afghan refugees, though.

The country’s permanent representative to the UN, Magzhan Ilyassov, said Nur-Sultan has received no explicit requests to house refugees and said that any such plea would be considered once it is made.

“Kazakhstan has joined all international treaties in the field of refugees and the protection of their rights. Everything will be considered in accordance with these laws," Ilyassov said.

More help has been forthcoming in assisting the UN itself. On August 18, Kazakhstan complied with a UN request to deploy staff with the United Nations Assistance Mission in Afghanistan, or UNAMA, to Almaty. Fully 100 mission workers will work from Almaty for six months; their stay may be extended depending on developments in Afghanistan.

Kyrgyzstan last month earned plaudits after the head of the security services promised that the government would issue 500 student visas to Afghans as a humanitarian gesture. No firm steps have been taken in enacting that pledge.

In the meantime, though, Bishkek on August 23 stopped issuing visas to citizens of Afghanistan until further notice. The Foreign Ministry cited the security situation and the desire to avoid the entry of “unwanted persons” as grounds for that decision.

The government has gone even further to salve possible public discontent over the appearance of foreign nationals on the country’s streets.

On September 2, local media reported that Kyrgyzstan has now limited how many visas it issues to nationals of Pakistan, Bangladesh, Nepal and India. This has happened in the wake of a wave of social media postings wrongly identifying people apparently from those countries as freshly arrived Afghans.

Turkmenistan has said almost nothing about the refugee crisis, except that it is eager to do business with Afghanistan’s new rulers and that the border remains open for trade. On August 19, the Foreign Ministry announced its was allowing flights evacuating foreign nationals out of Afghanistan to use its airspace.

The airport in Tbilisi served as a stopover during the Kabul evacuations. About 2,000 civilians and military personnel, including the Norwegian contingent in Afghanistan, had passed through Tbilisi as of August 26, the last time the Georgian prime minister’s office released a statement.

Georgia also provided temporary housing for the Afghan employees of several international organizations including the World Bank and the Asian Development Bank as they were pulled out of Afghanistan. The Foreign Ministry blamed Russia for spreading “disinformation” that refugees would be allowed to stay, insisting the Afghans would be transferred out of Georgia “within the shortest possible time.”

Georgia withdrew its last battalion of 860 troops in June, the Defense Ministry said. Like its neighbors Armenia and Azerbaijan, it had been contributing to the NATO peacekeeping mission in Afghanistan.

Azerbaijan’s 120 troops worked closely with the Turkish military on the evacuation at Kabul airport, the Defense Ministry said on August 16. The last Azerbaijani soldiers returned home via Tajikistan on August 27.

Armenia’s platoon to the NATO peacekeeping mission worked under the German command. They left Afghanistan in March.