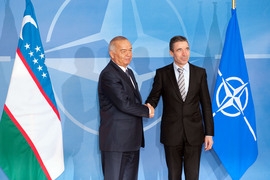 U.S. President Barack Obama should meet with his Uzbekistan counterpart, Islam Karimov, at the upcoming NATO summit in Chicago, says the American-Uzbekistan Chamber of Commerce. The AUCC has written two letters, one to Obama and the other to Secretary of State Hillary Clinton, arguing that an Obama-Karimov meeting would improve opportunities for American businesses in Uzbekistan:

[T]he Republic of Uzbekistan is important to U.S. interests in ensuring stability and security in the region, and under the Partnership for Peace Program, NATO and Uzbekistan are developing practical cooperation in a number of areas through Uzbekistan's Individual Partnership Program and the Planning and Review Process.

The Republic of Uzbekistan's political stability as well as its determination and commitment to ensure peace in the region are important features for business success. For AUCC member companies, the positive political dialogue between the United States of America and the Republic of Uzbekistan pursued by your office reinforces the U.S. business community's ability to increase investments and exports to the Uzbek market.

The AUCC would welcome your support for the request that you meet Uzbek President Islam A. Karimov during the NATO Summit in Chicago, IL. The U.S. business community believes that such a meeting with further enhance our bilateral relations, reiterate the U.S. commercial interest in this resource-rich country and strengthen our companies' business stance in the region.

The Bug Pit obtained copies of the letters, you can read the entire letter to Obama here. (The letter to Clinton is almost identical.)

The person who sent me the letter wasn't sure if Karimov was already planning to attend the NATO summit, but if he does, that will certainly be a bit of a spectacle.

Anyway, if Obama sees fit to meet with Karimov, it likely wouldn't be out of any business considerations: U.S. investment in Uzbekistan is still fairly small, for many reasons not necessarily related to U.S.-Uzbekistan relations. And whatever commercial interest Uzbekistan might have for the U.S. is meager in comparison to Uzbekistan's current strategic importance, as the key node in the Northern Distribution Network transporting military materiel in and out of Afghanistan.

It would be an awkward time for Obama to shake hands with Karimov, as the country's dismal treatment of its citizens is again in the news. But will strategic concerns trump that? There isn't enough public information about the current state of U.S.-Uzbekistan relations to know how useful a presidential meeting would be, but we'll certainly keep an eye on it.