US Citizen Accused of Plotting to Assassinate Armenian Officials 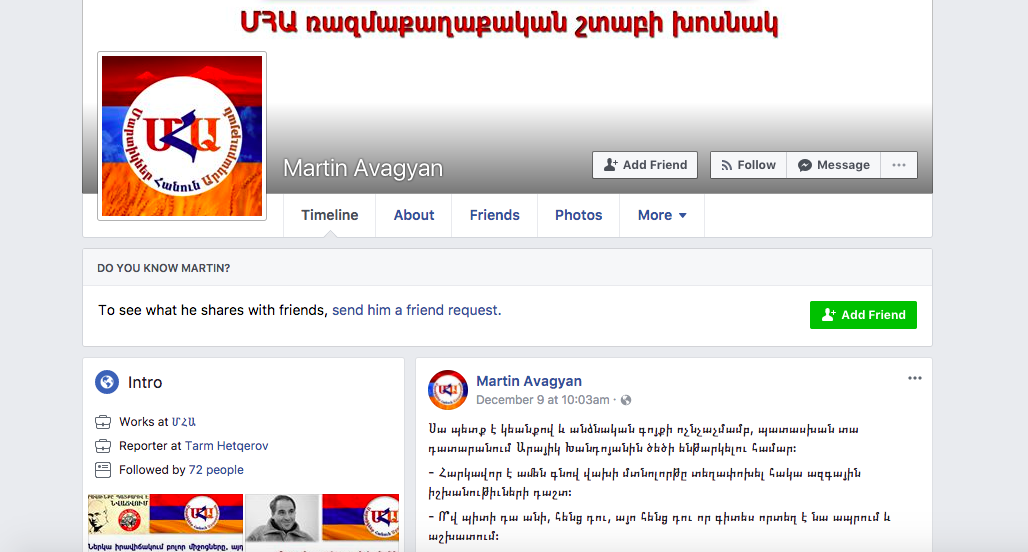 The Facebook page of Fighters for Justice, a group that Armenian authorities allege is run by an American citizen and has called for the assassination of Armenian government officials.

Armenian authorities have issued an arrest warrant for a United States citizen they say planned a series of “terrorist attacks” and “assassinations” against senior government figures. The move appears to be connected to an aggressive government campaign against extreme nationalist opposition forces.

Armenia’s National Security Service (NSS) have identified suspect by the moniker “R.K.” In September he reportedly created a Facebook profile for a radical group, called “Fighters for Justice” (MHA). The NSS said the account, under the pseudonym “Martin Avagyan,” posted messages calling for bombings, arson attacks and assassination of politicians and has been reaching out over social media to recruit politically disillusioned Armenians.

The NSS claims R.K. used the group to encourage Armenian “accomplices” to carry out “acts of terror.” Police are currently working to identify the suspects and have issued a warrant to their American counterparts requesting their help in preventing an attack.

“Given that the [main] suspect is a US citizen, resides in the US and their place of residence has been established, Armenia’s Office of the Prosecutor-General has forwarded this information to relevant US bodies in order to prevent the planned crimes,” the NSS said in a statement.

The US embassy in Yerevan issued a statement saying they were cooperating with the investigation: “We are working on the case with the law enforcement agencies of Armenia, based on the interests of the investigation. At the moment we can not provide any additional information.”

The MHA has made posts on social media backing “guerrilla methods” as a means of “punishing the pillars of the ruling regime.”

In a December 6 post, “Martin Avagyan” declared the MHA is embarking on a “second phase” of “armed struggle” after three dozen gunmen from the group Sasna Tsrer seized a police station in Yerevan in July 2016. Three policemen died in the struggle, with multiple wounded. Many of those involved in the attack are currently on trial.

The authorities allege that MHA is linked to Karabakh war veteran and opposition figure Zhirayr Sefilian, who is currently in prison. One of the demands made by the gunmen in Yerevan in 2016 was for his release.

Sefilian, a Lebanese-Armenian by birth, gained military experience fighting in the Armenian quarter of Beirut during Lebanon’s 1975-1990 civil war before moving to Armenia in 1990. During the Nagorno-Karabakh war, Sefilian was a commander of forces who seized control of Shusha, a strategic mountain town controlled by Azerbaijani forces, one of the most important Armenian victories.

In recent years he has become a political figure, using his war record to gain influence. He later launched Founding Parliament, a political group on the far nationalist fringes of the country’s political life.

Along with his arrest in 2016, he has been arrested in 2015 and 2007 for similar organized disturbances.

The U.S. citizen suspected in connection with MHA was later identified as Robert Koorkian, a Californian medical lab technician, by the Yerevan daily “Haykakan Zhamanak” along with an interview posted on their website. Koorkian did not deny opening the “Martin Avagyan” account but insisted that he never plotted any violence.

“I did not and do not have any group,” said the California resident. “What I have are thoughts which people like and which have terrified the authorities.”

Koorkian also told the paper that U.S. law-enforcement officers have already questioned him in connection with the Armenian arrest warrant. “Yes, they came and interrogated me, and I explained in detail the conditions of total dictatorship in which the people of Armenian now live,” he said, adding that the officers took no further action “for now.”