As Tbilisi proudly announces its disdain for minority rights, how will its partners in Washington and Brussels react? 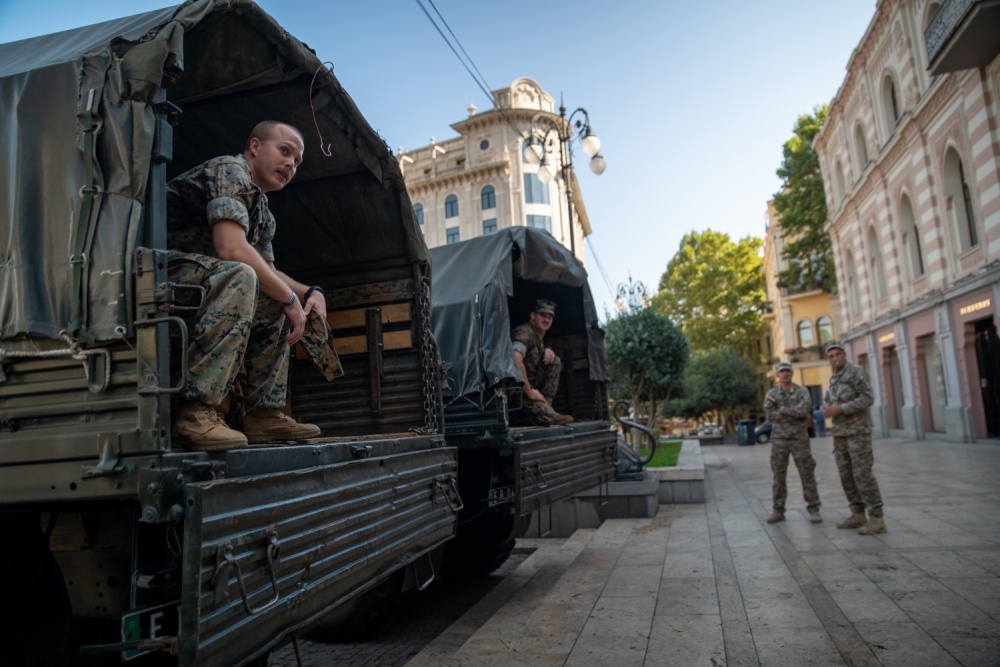 As the Georgian government has plainly stated its intention to abandon human rights principles in favor of an illiberal model of governing, it is putting Tbilisi’s allies in the United States and Europe in a bind. Do they act forcefully to get Georgia to respect minority rights, or look the other way lest they spoil relations with a key geopolitical ally?

As the country reckons with the mass violence that right-wing mobs meted out against journalists and LGBTQ+ Georgians on July 5, the day that activists had hoped to hold a public Pride march, the Georgian government has effectively blamed the victims. “When 95 percent of our population are against holding propagandistic parades in a demonstrative manner, we shall all obey that, my friends,” Prime Minister Irakli Gharibashvili said. “The times when the minority decided the fate of the majority are gone.”

Fellow hardliner Tea Tsulukiani, elevated to the post of vice prime minister following the violence, blamed the opposition for trying to get Washington and Brussels to interfere in Georgia’s affairs, again appealing to the majority. “Stop threatening and scaring me and the majority of this country with the European Union and the United States,” she said. “You have the government that you have and you’ll have to bear with it.”

Liberal values like minority rights have long had only a shaky hold in Georgia, but the explicit appeal to populist, majoritarian rule is something new. And it has called into question, perhaps to an unprecedented degree, Western allies’ vision of the country as a “beacon of democracy” in an autocratic region.

While the country’s opposition politicians regularly call on Western capitals to impose sanctions on the government as it drifts toward authoritarianism, this time there seem to be more signals that that could actually come to pass.

At a July 13 briefing at the State Department, a Georgian journalist asked spokesperson Ned Price about the possibility of American sanctions on Georgia; the journalist said his sources in Congress said that “there are talks on imposing personal sanctions against those officials in the Georgian government who were directly responsible for the violence we all saw on July 5.”

Price did not dismiss the possibility. “We have a number of tools to hold accountable those responsible in some way for human rights abuses, for violence around the world,” he said. “Sanctions are indeed one of those tools. As you know, we don’t preview sanctions before we enact them. But we are following the situation very closely, and we are committed to seeing to it that those responsible for this are held accountable.” Two days following Price’s remarks, senior Georgian officials had yet to respond.

The European Union’s reaction to the July 5 events has been milder so far, but the next day the bloc criticized the Georgian government’s appointment of several judges to the Supreme Court, saying that it contravened a deal between Tbilisi and Brussels. The appointments would “negatively affect” EU aid to Tbilisi, a spokesperson said. While that move was unrelated, it contributed to a sense that Western capitals were losing patience with Georgia and that concrete consequences could follow.

Price’s dangling of the possibility of sanctions may have itself been the message, said Paul Stronski, a senior fellow in the Russia and Eurasia Program of the Carnegie Endowment for International Peace, a Washington, DC, think tank. “Sanctions likely work better as a stick, as opposed to imposing them,” Stronski told Eurasianet. “Once you do, you lose leverage and sanctions haven’t necessarily changed human rights behavior [in other countries]. So holding that possibly out makes sense, although imposing them on Georgia would be a lift and would have repercussions.”

Washington could use a number of levers against Georgia, including personal sanctions against some officials, cutting some aid programs, or increasing funding for “democracy promotion” programs like support for media, Stronski said. But one of the cornerstones of the relationship – military aid – will not be touched, he predicted. “Nothing is going to affect security cooperation,” he said.

If the U.S. does take action, it would be the result not just of the most recent events but a cumulative frustration, Stronski said. Last year, a congressional committee proposed conditioning U.S. aid to Georgia on several factors, including “strengthening democratic institutions” and protecting foreign businesses operating in Georgia, citing a worrying trend of anti-democratic moves from Tbilisi.

“There’s a lot of Georgia fatigue and a lot of frustration here in Washington, 20 years after the Rose Revolution, after all the money and assistance that the U.S. has given, that we’re still in this paralyzed Georgian democracy, this cycle where you go through democratic breakthroughs, democratic backsliding, rising authoritarianism and illiberalism.” Three successive regimes – those led by Eduard Shevardnadze, Mikheil Saakashvili, and Bidzina Ivanishvili – have all followed that pattern, he said. “We’ve seen this track before and we seem to be stuck in it.”

Some in Georgia noted the apparent hypocrisy of members of Congress who frequently criticize Tbilisi when perceived geopolitical threats or business interests are at play, but have been relatively silent recently.

Sanctions or other forms of censure against the Georgian government also could have multiple ramifications that Washington may not want, Stronski said. For one, it would embolden the country’s political opposition, which has “not been behaving admirably” amid the crisis, and which repeatedly “tries to get the U.S. and EU to solve its problems for it,” he said. Second, it would be a huge boon for Georgia’s enemy and the U.S.’s rival.