The visit comes amid a rocky patch in relations between the two allies, and in the middle of a heated election campaign. 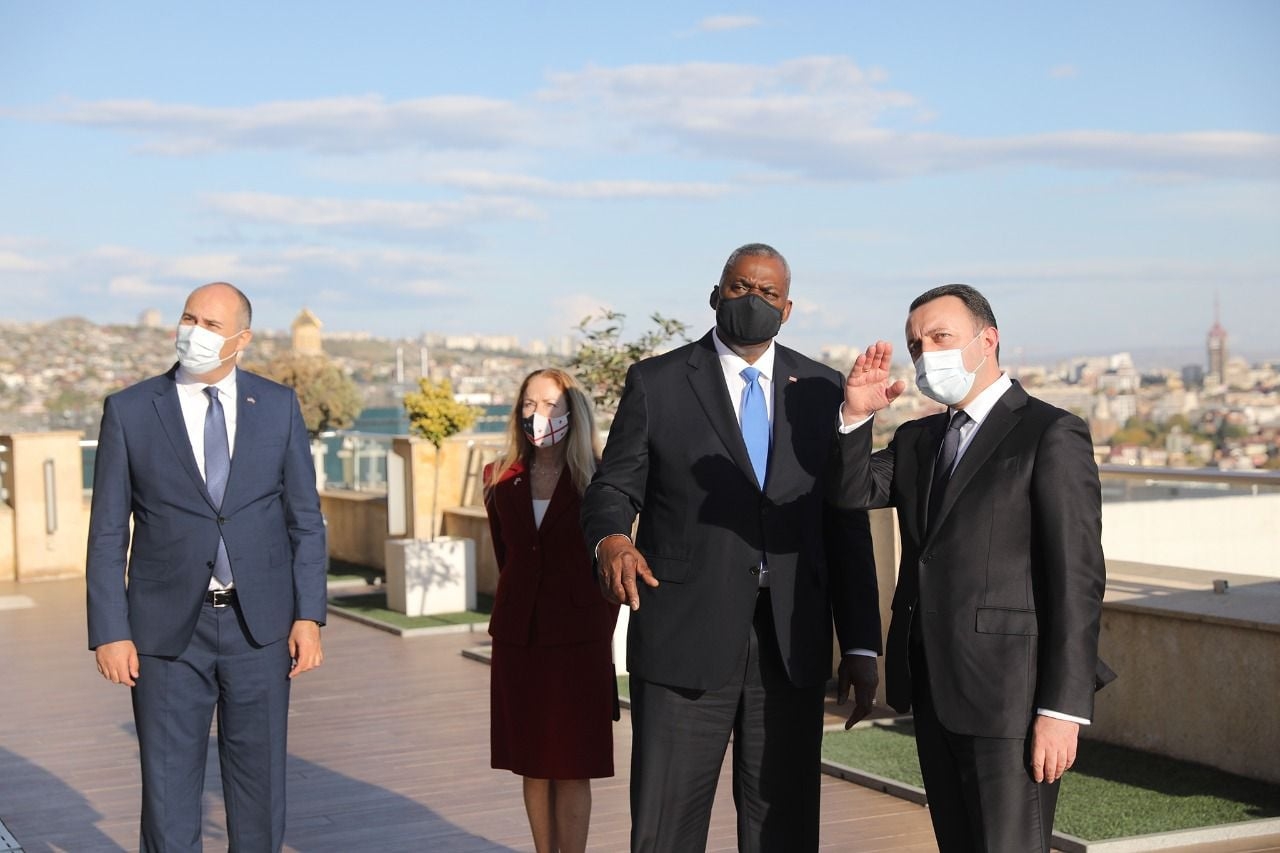 The United States secretary of defense has visited Georgia and pledged a new level of military cooperation, even as the Georgian government is increasingly coming under criticism from Washington for its drift toward illiberalism and authoritarianism.

Defense Secretary Lloyd Austin, on an October 18 visit to Tbilisi, announced a new Georgia Defense and Deterrence Enhancement Initiative, which he told reporters would represent “an exciting new phase of bilateral security cooperation between our countries.”

Military aid already makes up a significant portion of the U.S.’s total aid package to Georgia, which is one of the largest aid recipients in the former Soviet Union: the $146 million in U.S. assistance it is projected to receive in 2020 puts it second only to Ukraine, which has more than 10 times the population. Of that $146 million, more than half – $76 million – is slated for security assistance, according to official U.S. data.

In 2017, the U.S. approved the sale, long sought by Georgia, of anti-tank Javelin missiles. The two countries regularly carry out large-scale military exercises in Georgia, and thousands of Georgian soldiers have been trained by U.S. forces. In 2020, the Pentagon allocated $10 million to train and equip Georgian special forces troops.

It was not immediately clear how the new program would add to the existing military cooperation. But the show of support from Austin was significant, coming amid a rocky patch in relations between Tbilisi and Washington.

In recent months U.S. officials have become increasingly critical of Georgia’s government. U.S. ambassador to Tbilisi Kelly Degnan in July said she was “exasperated” by the government’s withdrawal from a deal aimed at easing political tensions that had been painstakingly brokered by Tbilisi’s Western allies. And the State Department this summer hinted that it was considering imposing some kind of sanctions against Georgian officials following large-scale, government-endorsed right-wing pogroms against LGBT activists and journalists.

But Austin’s visit is a reminder that military relationships often transcend politics and questions of democracy and human rights. Ahead of his visit, Pentagon officials said the trip was intended as a show of support for Georgia’s firmly pro-Western, anti-Russia foreign policy orientation.

"We are reassuring and reinforcing the sovereignty of countries that are on the frontlines of Russian aggression," an unnamed senior defense official said, according to a Defense Department news release. Georgia was the first stop on Austin’s trip, which also was scheduled to include stops in Ukraine, Romania, and a NATO summit in Brussels.

Austin did allude to Georgia’s democratization in his public remarks. “The Georgian government must do its part by leveraging U.S. support to strengthen Georgia’s democracy and to make fundamental reforms to bring Georgia even closer to the West,” he said at a joint press conference with Georgian Defense Minister Juansher Burchuladze.

By far the greater emphasis of the visit, however, was on security and foreign policy issues. Austin reiterated Washington’s support for Georgia’s stalled aspirations to join NATO and denounced Russia’s “occupation” of Georgian territory (referring to Moscow’s heavy financial and political support for the self-proclaimed governments of Abkhazia and South Ossetia, in what is largely internationally recognized as Georgian territory).

The visit came during a period of heightened political tension in the country, following shortly after the arrest of opposition leader and former president Mikheil Saakashvili and just ahead of a second round of local elections, scheduled for October 30.

All mainstream political forces in Georgia embrace a strongly pro-Western, anti-Russian foreign policy orientation. The opposition nevertheless accuses the ruling Georgian Dream party and its leader Bidzina Ivanishvili of being Russian stooges and has tried to frame politics in the country as a geopolitical struggle, a West-vs-Russia proxy battle.

“Let us stand together with the Georgian people against the Ivanishvili regime, which is dragging our homeland into Putin's Russia,” Saakashvili said in a message written for an October 14 rally in Tbilisi calling for his release. “We must not let this happen, and we must put Georgia back on the path to the West.”

Whatever resonance that message may have had, it was undercut by Austin’s warm rapport with ruling party officials, led by hardline Prime Minister Irakli Garibashvili.

"Your visit is a very strong message from the United States in support of our territorial integrity and sovereignty," Garibashvili told Austin.

Austin also gave a boost to Georgia’s opposition to a newly proposed “3+3” regional grouping, promoted by Turkey in the wake of last year’s war between Armenia and Azerbaijan. The format would include the three countries of the South Caucasus and their three big neighbors: Russia, Iran, and Turkey. All six countries have endorsed the idea save Georgia, which objects to the group’s inclusion of Russia and exclusion of “Western” countries.

Austin was asked about the 3+3 proposal at the press conference.

“Russia, which currently occupies 20 percent of Georgia’s territory, should focus on honoring its 2008 ceasefire commitments before promoting any new discussion platforms,” he said, referring to the agreement ending that year’s war over South Ossetia. Russia has not withdrawn its armed forces from Abkhazia and South Ossetia as stipulated in that agreement. “We certainly encourage the countries of the South Caucasus to work together to resolve disputes and to strengthen regional cooperation,” Austin added.