An attack by ruling party lawmakers on a critical TV executive has been criticized for undermining international calls for stability and for perpetuating a local culture of macho violence. 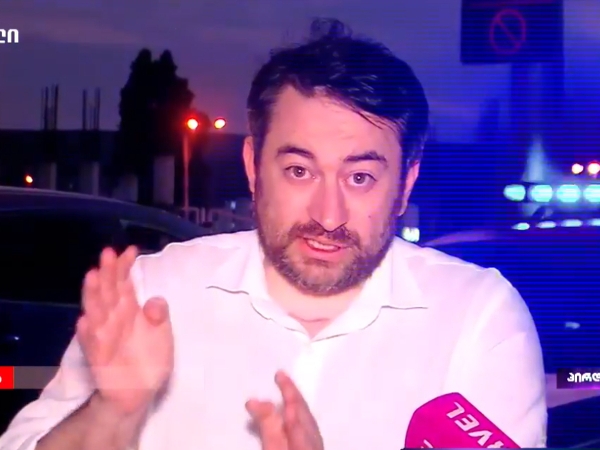 Tsereteli after the attack (screenshot from Netgazeti)

Georgian politics is a notoriously rough-and-tumble arena. But when a group of ruling party deputies physically attacked a pro-opposition TV executive at a U.S. Embassy reception, for many Georgians it was a new low.

The fisticuffs mortified Georgians, all the more so because it took place at the Independence Day celebrations of a key ally and benefactor, and just as the European Union has asked Georgian politicians to tone down their bickering as a condition for getting candidate status in the bloc. And to many, it seemed a disturbing worsening of a trend toward political violence in the country.

The donnybrook took place on June 30, amid hundreds of wine-swilling guests inside the U.S. Embassy compound on Tbilisi’s outskirts. Details of the incident remain murky, but what is known is that Anri Okhanashvili, a member of the governing Georgian Dream party and chair of the parliament’s legal committee, along with three other party members, led an assault on Vato Tsereteli, a founder of the network Pirveli TV.

“They were beating and cursing at Vato,” Tsereteli’s colleague Nana Aburjanidze, told news website Netgazeti. Aburjanidze said she tried to stop the fight, and for her trouble got hit by a blow meant for Tsereteli and then by a glass that he threw back at his assailants.

Okhanashvili later explained that he was triggered by an insult, which he did not disclose, that Tsereteli allegedly whispered into his ear. Borrowing from the language of geopolitics, Okhanashvili even described his actions as “a proportionate response.”

But to many, the response looked more like what young Georgian men often do in gang-style rumbles: After getting insulted, Okhanashvili brought along some pals as backup to physically settle the score with the offender. It’s a form of honor violence that continues to plague Georgia.

“What we saw was the normalization of this type of violent behavior at a very high level,” gender rights activist Baia Pataraia told Eurasianet. “Members of parliament told the public that it is perfectly okay to respond to an insult with violence.”

No one issued a public apology. If anything, leading political figures reacted with more outbursts of macho posturing. Georgian Dream’s hardline chairman Irakli Kobakhidze doubled down, declaring that he would have done the same in Okhanashvili’s place.

Ironically, Kobakhidze said this just as he was rolling out his party’s plan for reducing political polarization, one of the key demands that the EU has told Georgia is a condition for gaining the much-coveted candidate status.

The EU’s depolarization request relates not only to the party in power but also to the opposition, which has its own record of provoking and engaging in physical confrontations. Nika Melia, the boisterous chairman of the largest opposition party United National Movement (UNM), last September attacked his Georgian Dream counterpart Kobakhidze directly outside the EU delegation’s office in Tbilisi. After the two men traded insults, Melia tried to reach for Kobakhidze, grabbed a microphone from a TV reporter and threatened to throw it at his foe.

The European request to chill out, naturally, has become yet another issue for the ruling party and the opposition to squabble over. With the embassy brawl, it appears the issue is only getting worse.

“If before we have seen aggressive rhetoric and acts of violence at lower political levels, now we see violence reaching into the upper echelons. Even the presence of diplomats from our major partner does not serve as a deterrent,” Pataraia said.

Georgian Dream has long been accused of recruiting low-grade public officials, state security employees and thugs to intimidate Georgians they consider threats to their power.

Most recently, several NGO and opposition activists around the country have been attacked as they tried to rally support for pro-EU, anti-government rallies in Tbilisi. They say the government orchestrated the attacks.

U.S. Ambassador Kelly Degnan, responding to the embassy fracas, connected it with the intimidation of the activists. “We are concerned about reports of violence in the regions against political representatives,” Degnan said. “We’re seeing violence being brought in to infringe, suppress and deny people their constitutional rights.”

Degnan also tied the embassy attack to far-right attacks on dozens of journalists as they tried to cover Pride events a year earlier. “Violence is unacceptable, particularly when there’s been a pattern of attacks against media representatives,” Degnan said.

One cameraman from Tsereteli’s Pirveli TV died soon after being beaten at last year’s pogrom. The authorities said the cause of death was a drug overdose unrelated to injuries he sustained in the attack, but it put Pirveli on the warpath against the government. Journalists have accused the government of, at best, looking the other way as the violence unfolded and, at worst, collaborating with the groups responsible for the attacks.

The practice of sending goons to disrupt opposition-run events has a long history, and UNM was accused of similar antics when it was in power. Parliamentary and television debates have in fact occasionally degenerated into brawls under every administration of the past three decades, especially when power struggles reached decisive points.

Now the embassy episode and sporadic incidents in the regions have fostered fears of violence spreading further unless politicians heed the calls for depolarization.

Besides the obvious concerns over political stability, the embassy case and the spate of recent attacks is also problematic for the cause of greater female participation in politics – a goal that Pataraia has advocated for years. “If this sort of toxic masculinity, the fist fights and the swearing, becomes a new normal in politics, it will decrease the room for Georgian women’s participation as they won’t be comfortable operating in the macho world of physical confrontation and coarse language,” she said.

Others pointed out that the U.S. ambassador’s reaction did in fact mirror what Georgian women are often called upon to do: One running joke on Facebook has been that Degnan’s role going forward will be to intervene between brawling Georgian men and pull them apart, like Georgian women often do at drunken wedding parties.