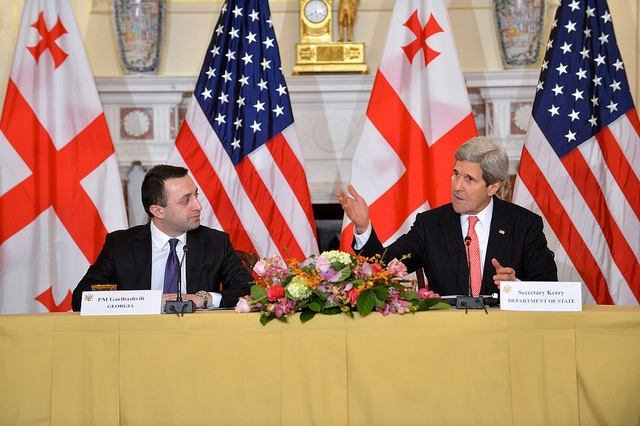 The U.S. State Department has endorsed granting Georgia its long-coveted status as an aspiring NATO member, the Membership Action Plan, on the heels of Prime Minister Irakli Gharibashvili'shigh-profile trip to Washington. It's not clear whether this represents a substantive policy shift, but it is the first time in recent memory that the U.S. has explicitly come out in favor of MAP.

In response to a recent letter by 40 members of Congress urging the State Department to "advocate granting MAP to Georgia, the U.S. Assistant Secretary of State of Legislative Affairs Julia Frifield wrote:

We believe Georgia deserves credit at the upcoming NATO Summit for the progress it has made and its demonstrated commitment to NATO operations and standards. We stand ready to support Georgia's own efforts to build a consensus within the Alliance for granting it a Membership Action Plan.

Now, that isn't the strongest statement ever, and Secretary of State John Kerry's remarks with Gharibashvili repeated what has been the standard Washington line that "We stand by the Bucharest decision and all subsequent decisions that Georgia will become a member of NATO," adding that: "The United States will work to make sure that Georgia’s progress is acknowledged by all members of this year’s NATO Summit."

(It was the 2008 Bucharest summit, recall, where NATO declined to give Georgia MAP but instead said that Georgia and Ukraine "will become members of NATO." And we see how that worked out in Ukraine...)

Kerry also announced "additional assistance" to Georgia: “Today I am announcing additional assistance by the United States to help support Georgia’s European and Euro-Atlantic vision, specifically to help Georgia achieve visa-free travel with the EU and to mitigate the hardships caused by borderization along the occupied territories." As Civil.ge noted, "details of the 'additional assistance' were not immediately available."

But State Department officials have recently shied away from talking about MAP, and have only discussed it when asked directly by Georgian reporters. Assistant Secretary of State for European and Eurasian Affairs Philip Gordon said in 2012, ahead of the parliamentary elections, that "the members of NATO have been watching very carefully how this plays out and their judgment as to whether the process with NATO should move forward, whether specifically on a MAP or just more generally will very much be affected on the state of democracy, and it’s one of the features of this alliance that democracy is a key criterion." And Deputy Secretary of State William Burns in 2011: "The issue of MAP, as you well know, is a decision that all the Allies in NATO have to make. We will continue to support Georgia’s aspirations to become a member of NATO, just as we support Georgia’s aspirations to integrate more fully into Euro-Atlantic institutions more generally."

As Frifield's letter suggested, the U.S. is only one member of NATO. And it was in favor of MAP in 2008, NATO works on consensus and other Georgia-skeptical NATO members, primarily in Western Europe, scuttled that plan. There's no indication that those skeptics have changed their mind on MAP for Georgia, so MAP still seems a remote prospect when NATO gets together later this year in Wales. But this nevertheless seems a significant statement from Washington. (The U.S. State Department and the U.S. embassy in Tbliisi did not respond to queries from The Bug Pit.) And it's all the more reason to believe that something substantial will happen with Georgia and NATO in Wales.