A visit by U.S. Secretary of State Mike Pompeo underscored how Washington sees the region defined by its own rivals. 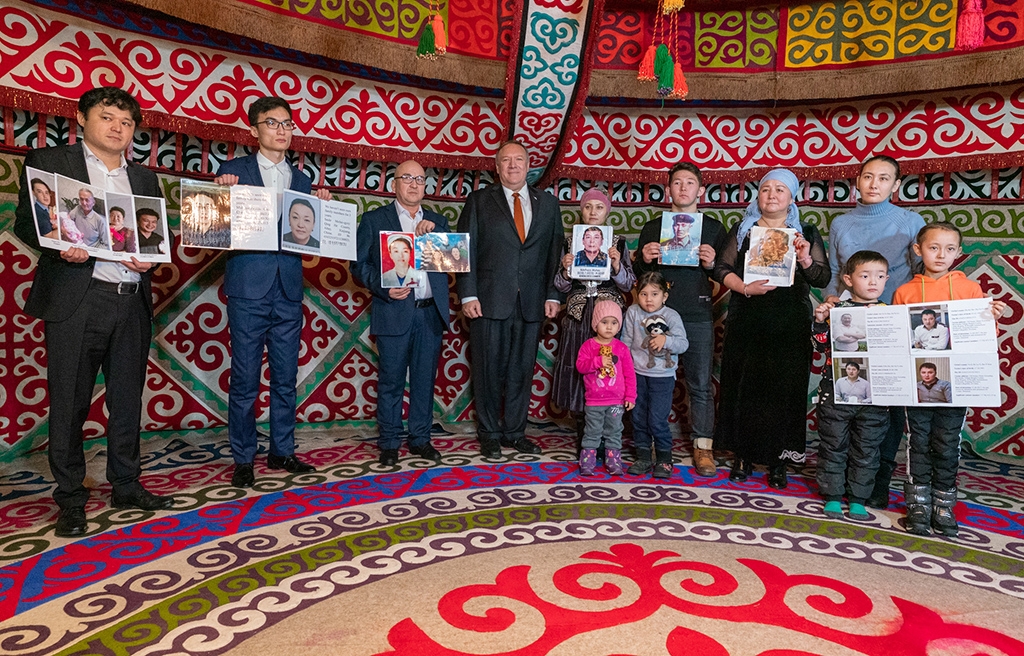 Mike Pompeo meeting families of ethnic Kazakhs from China who have been campaigning to raise attention to relatives being held in so-called re-education camps in Xinjiang province. (@SecPompeo)

U.S. Secretary of State Mike Pompeo has whisked through Central Asia spreading caution about what he describes as the dangers of relying too heavily on traditional partners, Russia and China.

He made his point most explicitly in Kazakhstan’s recently renamed capital.

“We fully support Kazakhstan’s freedom to choose to do business with whichever country it wants, but I am confident that countries get the best outcomes when they partner with American companies,” Pompeo said at a February 2 joint press conference in Nur-Sultan with his Kazakh counterpart Mukhtar Tleuberdi.

The groans could be heard from Moscow. Russian reporters grumbled that when Kazakhstan’s President Kassym-Jomart Tokayev received Pompeo, he spoke in English, rather than in his native Kazakh, which they insisted was a violation of protocol. Some pointed out that those same people seem less bothered when Central Asian leaders speak in Russian, however.

Pompeo’s visit has come ahead of the imminent unveiling of the Trump administration’s new U.S. strategy on Central Asia, which Washington’s foreign affairs chief said would put “independence and prosperity at the core of [its] approach."

The anti-Beijing agenda was revealed even more boldly when Pompeo made time to meet with ethnic Kazakhs from China who have been campaigning to raise attention to the plight of relatives being held in so-called re-education camps in China’s Xinjiang province.

The secretary of state brought up the matter at the press conference with Tleuberdi, when he urged U.S. partners to assist in ending what he called China’s repressions. In a tweet, Pompeo reiterated the point by commending Kazakhstan for “not forcibly returning members of Muslim minority groups to an uncertain fate in China and protecting those who seek asylum.”

This is a mostly inaccurate description of the real situation. In its eagerness to avoid displeasing Beijing, Kazakhstan has typically pursed the deportation of people seeking asylum, although such efforts have routinely met with protest. Activist groups trying to keep this issue on the agenda, meanwhile, have faced harassment.

In the second and concluding leg of his Central Asia tour, Pompeo was in Uzbekistan to take part in the C5+1 ministerial summit, a format bringing together the foreign ministers of Kazakhstan, Kyrgyzstan, Tajikistan, Turkmenistan and Uzbekistan – all overseen by a U.S. State Department representative. The thinking in Washington is that a more connected, integrated and collective region will be better positioned to negotiate in the face of the overweening influence of large nearby partners.

Critics charge that this approach is outmoded and insufficiently ambitious, however.

“Would be helpful to start by outlining U.S. objectives for the region *itself*, then work our way to Russia and China,” tweeted Evan Feigenbaum, a former senior State Department official. “It is a poor message fully 29 years after independence to define the U.S. agenda, first, in reference to external powers. *Nobody* in the region is naive about them.”

America’s correlated agenda is for Central Asia to engage more actively with Afghanistan, a nation whose future Washington is eager to get off its hands. While in Tashkent, Pompeo announced a $1 million initiative to increase cross border trade between Uzbekistan and Afghanistan.

Uzbekistan poses the most significant peril to the U.S. vision as it vacillates over whether or not it intends to join the Moscow-dominated Eurasian Economic Union trade bloc. Washington is adamantly opposed to any such move.

Tashkent has made repeated noises about accession, although President Shavkat Mirziyoyev kicked the whole question into the mid-height grass last month by announcing at this state-of-the-union address that Uzbekistan’s relations with the EAEU are still being reviewed.

“Parliament and the government must study the issue of cooperation between Uzbekistan and the EAEU and present its conclusions, providing reasoning for its position,” he said.

Pompeo’s visit to Tashkent produced familiar-sounding bromides about bilateral cooperation becoming “systematic and regular” and reaching the “peak of their development,” as Uzbek Foreign Minister Abdulaziz Komilov put it.

If language is a metric though, Moscow may have the edge.

Kremlin-owned news website Sputnik cited Lavrov as saying Russia had to date invested $9 billion in the Uzbek economy (but provided no timeframe) and that over 1,700 companies operate in Uzbekistan with Russian capital.

The future of U.S.-Uzbek ties hinge on the extent to which President Donald Trump’s grand promises, made while Mirziyoyev was visiting Washington in May 2018, come to pass.

Trump spoke at the time about how Uzbekistan had “signed over 20 major business deals with United States companies, which, if fully implemented, will be worth more than $4.8 billion and could sustain more than 10,000 U.S. jobs and open opportunities for billions of dollars in future U.S. contracts.”

It is for this reason that the rate of progress in Uzbekistan’s political reforms are seen as so crucial. Pompeo made that link explicitly in his comments at a joint press event with Komilov.

“Uzbekistan’s reform agenda … has already started to generate new foreign investments and jobs,” Pompeo said on February 3. “We discussed ways, too, to further improve the business climate, strengthen the rule of law, and provide sustainable economic opportunities for all citizens all across Uzbekistan. We want private investment, American private investment sector, to flow between our two nations.”

Just how high the Trump administration intends to hold its standards bar is another matter.

Tashkent is in a tight position. Russia will chivvy it relentlessly on the EAEU front. Resisting those overtures will be difficult unless warming relations with the United States deliver firm results soon.

The wider C5+1 agenda could as easily be derailed by Washington’s clumsy failure to coordinate policy.

In a woeful piece of timing, the Trump administration announced last week that it was including Kyrgyzstan among six nations targeted by a travel ban that will block prospective immigrants from receiving visas. The U.S. Embassy in Bishkek explained that the restriction was imposed on the countries over concerns at “deficiencies in the security of their travel documents following an extensive review.”

“These deficiencies include the lack of an electronic biometric passport, failure to report lost and stolen passports, and inadequate information sharing on suspected terrorists,” the embassy’s statement said.

This has gone down poorly in Kyrgyzstan, whose foreign ministry has decried the move as wholly unjustified and warned of the “notable damage” to Kyrgyz-American relations.