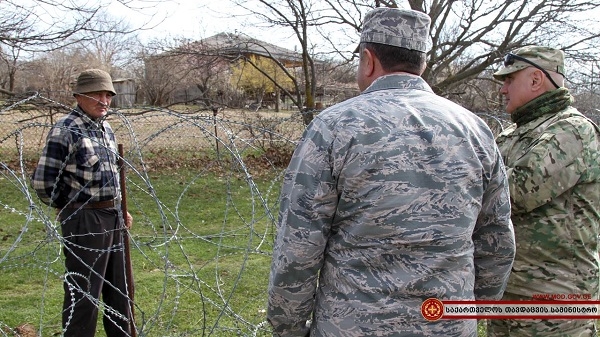 General Philip Breedlove, commander of U.S. European Command, visits a farmer in Georgia whose land was divided by a Russian-built fence on the administrative boundary with South Ossetia. (photo: MoD Georgia)

The top United States military official in Europe has visited Georgia, promising "bigger and better" joint military exercises and telling Georgians that to deter Russian aggression they should build ties with NATO and the U.S.

General Philip Breedlove, commander of U.S. European Command, visited Georgia March 22-23. Breedlove has become known as one of the most anti-Russia hawks among current U.S. officials, and in Tbilisi he did not disappoint:

As your brave valiant nation has witnessed, Russia continues to extend its coercive and corrosive influence on its periphery. Now it's also trying to reestablish leading and aggressive role in a world stage. Russia automatically seeks to overturn the established rules and principles of the international system, fracture the unity of the free world and to challenge our solidity.

[That is from a transcript on Georgia's Ministry of Defense website; presumably General Breedlove's English was not so choppy.]

Breedlove, along with Defense Minister Tinatin Khidashelo, also visited the line of contact between Georgia proper and the de facto breakaway territory of South Ossetia, where Russian troops have built a series of fences, much to Georgians' dismay. There Georgian journalists asked the officials what Georgia could do to address increasing threats from Russia. Breedlove's answer was striking: "You should follow your current path and further enhance your partnership both with NATO and the U.S. so that your close partnership is visible to the entire international community."

The events of 2008, when Georgia and Russia fought a war over South Ossetia and NATO and the U.S. were effectively powerless to help Georgia, should have decisively demonstrated the fallacy of that sort of strategic planning.

It is of a piece, however, with Georgia and American officials' newly combative rhetoric in the wake of Russia's newly belligerent foreign policy. During another senior American general's visit to Tbilisi last September, Khidasheli said that a new series of joint U.S.-Georgia military exercises, Noble Partner, was intended to practice responding to Russian aggression.

During this visit, General Breedlove discussed the planning of this year's iteration of Noble Partner, which will take place over three weeks in May, and will include British soldiers, in addition to Americans and Georgians. “And it will be bigger and better than last year’s Noble Partner exercise,” Breedlove added. He did not offer details, and did not mention the possibility of American Abrams M1A2 tanks participating, as Khidasheli suggested earlier this year.