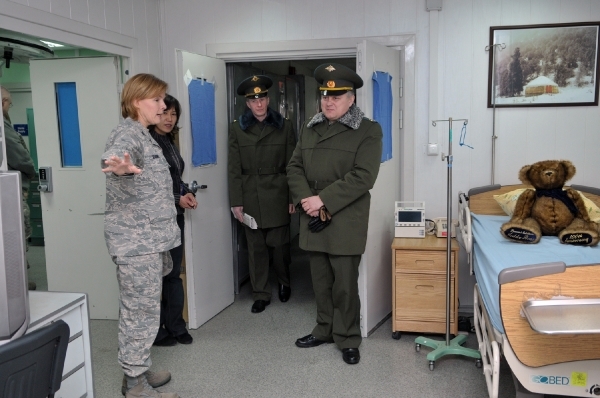 U.S. officers give the Russian counterparts from the Kant air base a tour of the Manas air base in Kyrgyzstan in 2011. (photo: Transit Center at Manas)

With the Pentagon's announcement that the U.S. is leaving its air base in Kyrgyzstan, one would think Russians would be gloating: after finally succeeding in rousting the Americans out of their back yard, Moscow has scored an undeniable geopolitical victory.

Or, perhaps, that's just what they want you to think. The Russian press and Moscow-friendly analysts appear to believe that the Pentagon's announcement that they are moving operations out of the Manas base near Bishkek to the Romanian Black Sea coast is just a bluff. And they have developed a set of elaborate conspiracy theories to explain what is really going on with the Americans in Kyrgyzstan.

The prevailing theory is that the Pentagon is in cahoots with Turkey, and that under the cover of a Turkish-operated "civilian" transportation hub at Manas, Americans will continue to carry out military missions there as subletters from the Turks. But the mission will change, from supporting logistics in Afghanistan, to supporting a NATO air defense/surveillance system that will cover all of Central Asia, as well as parts of China. In addition, a new U.S. embassy building in Bishkek will include a secret, 30-meter-deep underground facility that will be used by American intelligence specialists working on the notorious Echelon spying program.

The source for this version of events seems to be a report on a Kazakhstani website, Radio Tochka. It was then picked up by analyst Aleksandr Knyazev, who was quoted extensively in a piece in Russian newspaper Nezavisimaya Gazeta espousing much the same theory, but adding a few of his own elements (or, if you prefer, scoops). And the story then spread even more widely from there.

The Radio Tochka report, which got things kicked off, even cites named sources:

For example, former deputy director of the National Bank of Kyrgyzstan, leader of the National Front movement Abdulmalik Myrzayev, suggested a hypothesis about the creation of a radar surveillance network. "The great territory of the base is now occupied by warehouses, especially guarded, as far as I know even soldiers know what is kept there. There was a suggestion, that there were large weapons. Then it was supposed that there were air traffic control towers, in spite of the fact that those sorts of towers already exist -- why duplicate? In reality, this structure fully corresponds with the establishment of the Echelon radar surveillance system," the politician is sure.

And Bishkek-based analyst Mars Sariyev adds: "There is information that around 200 workers on the base are now gaining diplomatic status and they will continue their service in Kyrgyzstan, but in the U.S. embassy."

That piece was on October 9, before the U.S. formally announced that it was leaving Manas. But that announcement didn't do anything to quiet such speculation. The Nezavisimaya Gazete story, published a few days after the announcement, put forth more or less the same theory.

Along with the Manas complex, according to the expert [Knyazev], the [radar surveillance] system will include 26 radar stations, scattered around the territory of Kyrgyzstan (among those known -- Sary Tash in the Alay valley, Kadji Saya in Issyk-Kul oblast, and Tokmok), which when put into service will carry out monitoring of air space not only of Kyrgyzstan, but the adjacent territories of China, Kazakhstan, Uzbekistan, and Tajikistan. "In the future, this complex will be part of a new, southern NATO missile defense system," the expert said.

The Voice of Russia also supported the missile defense theory:

The US will hardly find a better place to keep an eye on Russia than Kyrgyzstan, said Konstantin Bogdanov, a military observer at the RIA Novosti news agency.

“The Americans are seeking to deploy missile defense infrastructure in Kyrgyzstan or other parts of Central Asia for a whole number of reasons. First, it will enable them to watch missile launch tests at Russia’s Kapustin Yar and Balkhash shooting ranges, the latter still being used as a test ground for Russian anti-missile weapons. The latest maneuvering warheads to be installed on Russian missiles will be test-fired from Kapustin Yar to Balkhash, which makes Kyrgyzstan a convenient observation point.”

And in an interview with the Kazakhstan version of Moskovskiy Komsomolets, Sariyev expands on this theory, adding an intriguing drug-trafficking element, noting that the U.S. war in Afghanistan has, if anything, increased the flow of heroin into Russia:

"In fact the global geopolitical game continues, and heroin is one of the means of destroying the enemy. From one side is the destruction of the gene pool, and from the other, money earned from the trafficking, used to carry out ones goals. That's why a large question has arisen around bases like Manas, having diplomatic immunity. The question, does it represent one of the channels of narcotics shipments, remains open."

(For what it's worth, U.S. officials have denied these allegations, for which no evidence other than the very circumstantial has been put forth.)

Aside from stories like the above, the news that the U.S. is leaving Manas seems fairly muted in Russia. Kommersant, which frequently carries stories on Central Asia geopolitics with Russian government sources, has had just two news briefs. Even Pravda, which usually can be relied upon for exhaustive coverage of the doings of the U.S. in and around Russia, has nothing on the departure from Manas in English, and only a fleeting mention in Russian -- again casting doubt on whether the Americans are really leaving.

In part, this is no doubt because large sectors of the Russian government and media have as their mission ginning up an American threat. (A similar, though smaller, dynamic exists in Washington vis-a-vis the Russian threat, along with al Qaeda, Iran, China, and numerous other "threats.") And the disappearance of that threat is a. not a sexy news story and b. threatens the narrative that drives Russian foreign policy.

And secondly, the Russian disbelief that this could really be happening probably stems from a sort of projection of their own geopolitical vision onto the U.S. While there was certainly a geopolitical element to Manas, its primary mission was a very concrete, operational one: to process soldiers going in and out of Afghanistan, and to refuel planes flying above Afghanistan. Russia's Kant base in Kyrgyzstan, set up in response to Manas, by contrast seems to have no purpose other than as simply a geopolitical marker. And Russia seemed to see Manas in those terms, as a geopolitical flag planted in the ground. So while the Russian narrative would see this as a huge, symbolic defeat for America, in the U.S. narrative it's just an operational hiccup.

There are, to be sure, genuine geopolitical reasons for the U.S.'s departure from Manas (about which more soon) but they are in the background. Anyway, you have to almost feel bad for the Kremlin: they got their big victory and they can't even celebrate it.