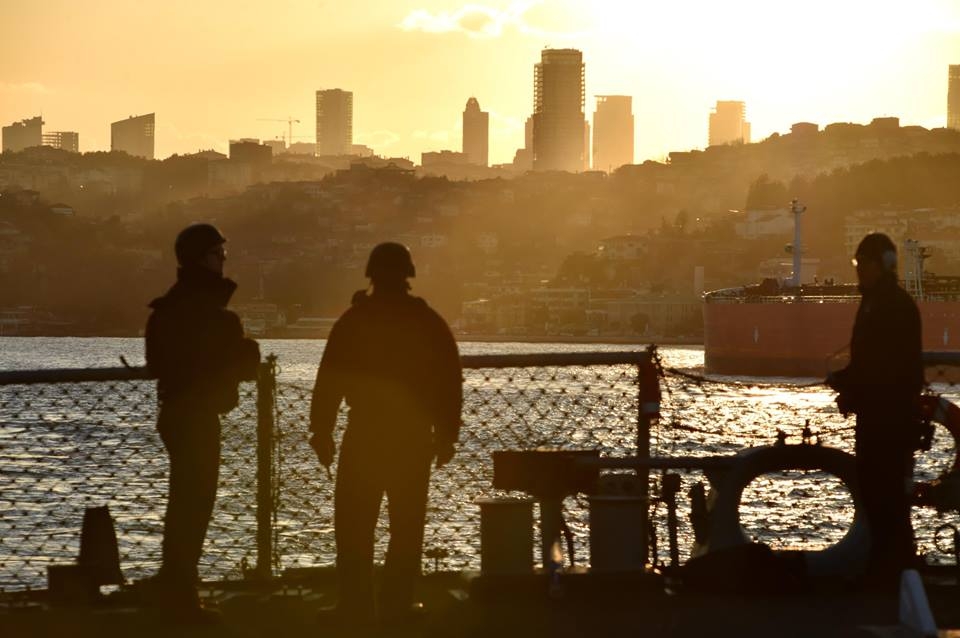 An American warship has entered the Black Sea and three more NATO ships have docked in Istanbul as tension rises on the Bosphorus straits, a source of contention between Russia and Turkey for centuries.

The U.S. Navy destroyer the USS Ross entered the Black Sea on December 3. These visits to the sea are relatively routine, but this is the first such American visit to the Black Sea since Turkey shot down a Russian bomber jet on the Turkey-Syria border. In addition, warships from three other NATO members -- Canada, Portugal, and Spain -- have moored at Istanbul in an apparent show of support. Turks interviewed by Euronews were reportedly "reassured" by the NATO ships' visit.

The visits come as there has been a flurry of discussion in the Russian and Turkish press about the role the Bosphorus straits might play in the conflict between the two countries. The Bosphorus is the only outlet of the Black Sea to the Mediterranean, and so Russia depends on it as its only warm water access to the rest of the world.

According to the 1936 Montreux Convention, Turkey is obliged to allow free traffic through the straits, except in the case of war or the imminent threat thereof. While this is, in theory, a huge strategic advantage that Turkey holds over Russia, to actually close off the straits would no doubt be seen by Russia as an act of war and it's very unlikely Ankara would take such a step unless the situation between the two countries dramatically worsened.

That has not stopped speculation in Russia that Turkey may be already using its Bosphorus leverage. Russian media have reported that Turkey is deliberately slowing down the passage of Russian ships through the straits (Turkey controls the navigation through the narrow, busy straits and inspects every ship passing through.) The website of the Russian Ministry of Defense's television station, Zvezda, published a report Saturday speculating on who would win a naval war between Turkey and Russia. (No spoilers...)

Russia must have an unlimited access to Turkish Straits. The so called Syrian Express deployments of Russian Ropucha and Alligator class landing ships and auxiliaries are vitally important to keep Russian troops inside Syria supplied. ... This is an important reason, why the Russian counter aggression to the shooting of its plane is (and will remain) asymmetrical. This is why Russians are trying to hurt Turkey with diplomatic and economical responses rather than military actions.

It's also worth noting that the tempo of American visits to the Black Sea has in fact markedly decreased this year. In 2014, U.S. warships spent a total of 207 days in the Black Sea, which was a big increase over the 27 days they spent in 2013, according to the careful tracking by the Bosphorus Naval News. But before the USS Ross's most recent visit, U.S. ships had only spent 137 days on the Black Sea in 2015, and it's already December.

UPDATE: On Sunday, Turkish officials responded to images shown on Turkish television of a Russian soldier appearing to brandish a surface-to-air missile launcher from the deck of a warship passing through the Bosphorus.

"For a Russian soldier to display a rocket launcher or something similar while passing on a Russian warship is a provocation," Foreign Minister Mevlüt Çavuşoğlu told reporters on Sunday. "If we perceive a threatening situation, we will give the necessary response."