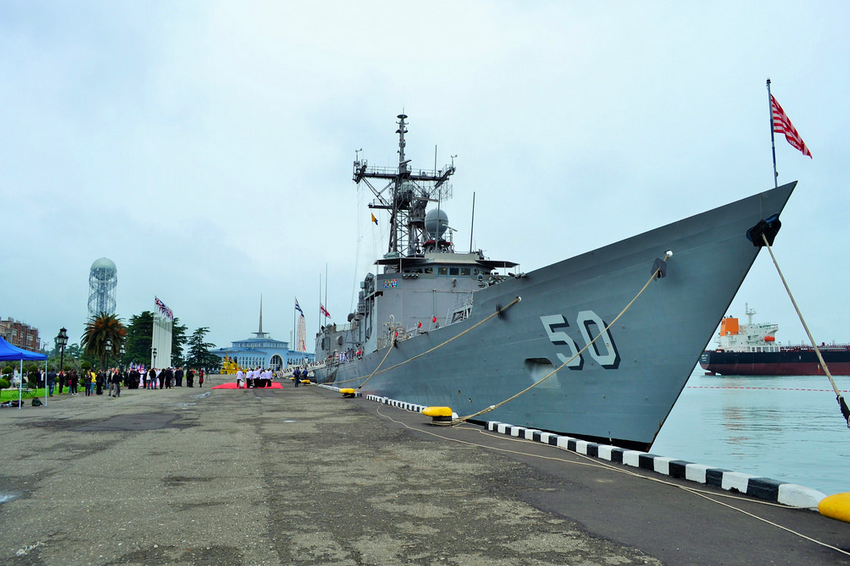 The United States is planning a "stronger presence of U.S. ships in the Black Sea" as Russia accused the U.S. and NATO ships that have been on the sea recently as "spying" on Russia's own Black Sea Fleet. U.S. Defense Secretary Chuck Hagel visited Romania on Thursday, and he made a stop at the USS Vella Gulf, which was on a port call at Constanta as part of its tour around the Black Sea. The Vella Gulf’s port visit in Romania “a clear expression of [the] commitment" that the U.S. and NATO have expressed recently toward strengthening their military presence in the countries neighboring Russia "“which is becoming even more important in the wake of Russia’s actions in Ukraine." From a Pentagon press release:

Another example, Hagel said, is Obama's announcement this week that he will ask Congress for up to $1 billion to enhance the readiness of U.S. and allied forces in Europe, including more U.S. troop rotations for exercises and training and a stronger presence of U.S. ships in the Black Sea. “The U.S. has maintained a regular naval presence in the Black Sea since mid-March, with the USS Truxton, the USS Donald Cook and the USS Taylor all conducting port calls in Romania, and we will sustain this tempo going forward,” he said. “We are also stepping up our cooperation with other partners and allies surrounding the Black Sea, including Bulgaria, Georgia, Turkey, and Ukraine.”

Russia has repeatedly complained about the increased Western military presence on the Black Sea. On Wednesday, Itar-Tass quoted an unnamed source in the "military-diplomatic corps" as saying that a French frigate in the Black Sea was spying on Russia:

The frigate Surcouf is conducting maneuvers in the northern part of the Black Sea, periodically approaching 50-60 kilometers from the coast of Crimea. According to available data, the NATO warship is conducting electronic surveillance of military objects of Russia's Black Sea Fleet, deployed on the peninsula along the coastline, as well as of important administrative and strategic objects on the coastal territory."

The source added, helpfully, that Russia was watching the French ship, as well: "All the actions and maneuvers of the French 'uninvited guest' are being recorded, including its compliance with norms of international maritime law."

According to the expert's data, the frigate passed along the Caucasus coast, the coast of Crimea, lingered alongside Novorossiya and relocated to the northwestern part of the sea. "Now the French ship is heading in the direction of Odessa, but whether it will stop there is not yet known. In any case, the visit of the Surcouf to Odessa, if it happens, will not remain a secret."

The presence of foreign warships on the Black Sea is regulated by the Montreux Convention, which limits them to 21 days at a stretch. Recall that one U.S. warship, USS Taylor, stayed on the sea longer than 21 days because it needed repairs. That circumstance was never noted by Russian officials, who complained about the violation. But in a piece from RT on Thursday, headlined "NATO’s merry-go-round electronic surveillance in the Black Sea," they took a swipe at that assertion:

The USS Taylor actually became a rare example of a ship that violated the Montreux Convention by exceeding the limited time of deployment to the Black Sea by 11 days, as the crew claimed the vessel ran aground on February 12 and had to undergo maintenance in the Turkish port of Samsun.

All this is set to get a lot more interesting.