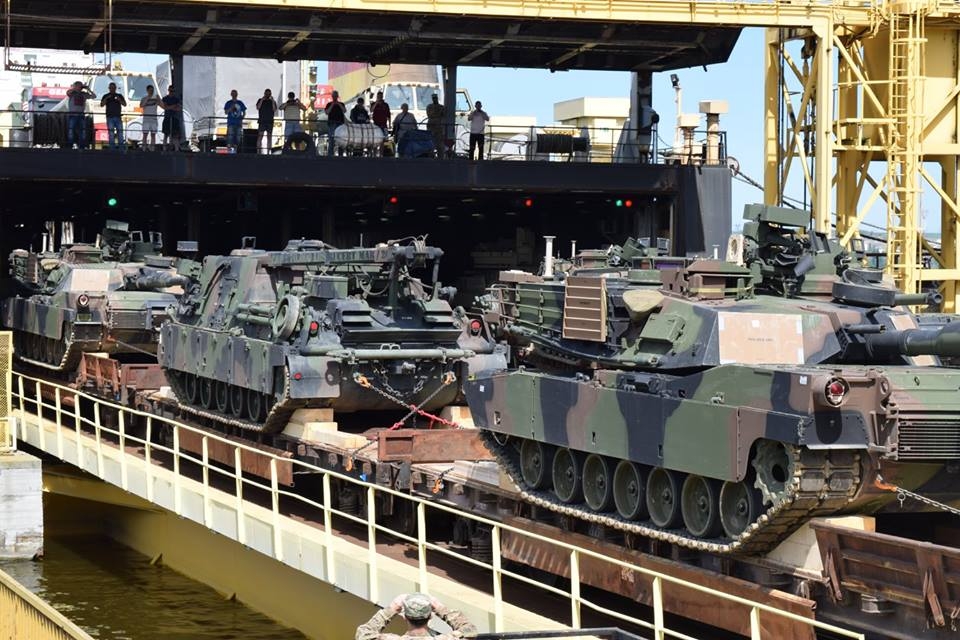 U.S. Army officers load Abrams tanks on to a ferry in Varna, Bulgaria, to ship them to Georgia for NATO military exercises. (photo: U.S. Army)

The United States is for the first time shipping its tanks across the Black Sea for joint exercises with Georgia.

The U.S. Army's 1st Armored Brigade Combat Team, 3rd Infantry Division loaded the tanks on to ferries in Varna, Bulgaria, in order to ship them to Batumi ahead of the second annual Noble Partner military exercises to be held later this month. The exercises will include 650 American troops, as well as 500 from Georgia and 150 from the United Kingdom.

Last year's Noble Partner (the first such exercise) was noteworthy for the fact that the U.S. shipped Bradley Fighting Vehicles across the Black Sea for the occasion. It was the first such movement of heavy U.S. materiel across the sea and was a vivid illustration of the U.S.'s ability to project power around Russia's periphery. This year's addition of tanks to the mix ups the stakes a little more.

Ahead of the tanks' arrival, a delegation of U.S. officers including the top army officer in Europe General Ben Hodges, visited Batumi to prepare. "We are here to look at port in Batumi to understand what is required to move equipment, how fast we can move equipment. So this is part of professional soldiers studying the logistics. But we also came here to demonstrate to Georgia... that we are committed to work with Georgia, to continue work improving interoperability," Hodges said, as reported by Georgia's Ministry of Defense.

"In NATO and the U.S. they understand that to get back influence on the Black Sea they need to strengthen naval infrastructure, naval forces, coastal lines of those countries that are members of the bloc or are striving to enter," said Irakli Aladashvili, the editor of Georgian military magazine Arsenali, in an interview with RFE/RL.

The Georgian Minister of Defense Tinatin Khidasheli announced the participation of the tanks back in January (though she apparently jumped the gun, and spoke before the U.S. had confirmed it). At the time, she linked the tanks' presence to showing potential invaders (that is, Russia) that the U.S. had Georgia's back: “Our task is to make sure that anyone, be it a person or a country, thinks twice before taking any wrong decision… It is not arms we are talking about but the need to meet the most imperative needs of the Georgian army,” Khidasheli said.

The Georgian soldiers taking part will include the light infantry company that will be part of the NATO Response Force, a deployable rapid reaction force, and part of the purpose of the exercise is to carry out the Georgian unit's final NATO certification.

The exercise will be held at the new NATO training facility at Vaziani, a sort of consolation prize for the continuing refusal by the alliance to admit Georgia, in spite of Tbilisi's best efforts. Alliance members will meet at a summit in Warsaw in July, and if Georgia had any shred of hope of being offered membership, it was quashed when the U.S. ambassador to NATO said last month that the alliance would not take any new members for "the next several years perhaps or even longer."