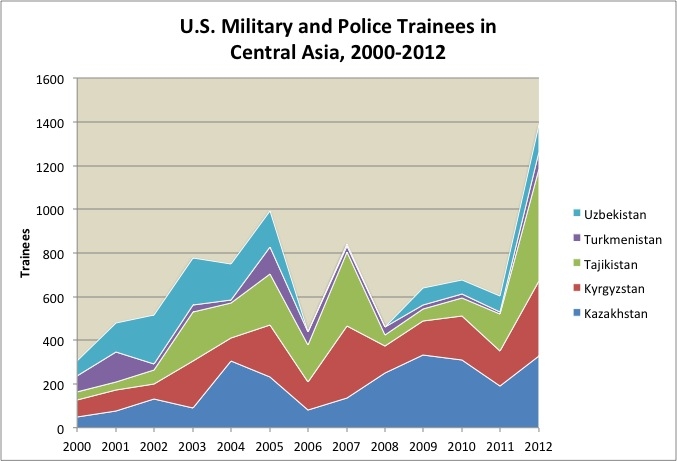 The United States has substantially increased its training of security forces in Kyrgyzstan and Tajikistan, focusing on the State Committees of National Security (GKNB) of the respective countries, newly released U.S. government documents show.

The newest version of the annual Foreign Military Training and DoD [Department of Defense] Engagement Activities of Interest report shows a sharp increase in the number of activities in Central Asia under Section 1004 of the DoD authorization bill. Section 1004 provides funding for the Pentagon to conduct training of partner nation security forces for counternarcotics missions. According to the data, 411 members of the Tajikistan security forces and 225 in Kyrgyzstan were trained under Section 1004 in 2012, while in previous years only a handful or no troops from Central Asia were trained. Of those, at least 350 of the Tajikistani officers and 100 of the Kyrgyzstanis were from the GKNB. A full rundown of the data on the Caucasus and Central Asia, including some good graphs, can be seen at the new Security Assistance Monitor website.

The rub with this sort of training is that the GKNB, as the most capable units in post-Soviet security forces, tend to carry out both missions against serious external threats and also persecute legitimate domestic opposition. A case in point is the controversial operation in Khorog, Tajikistan, last year, in which the GKNB played a leading role. And yet, all evidence points to the fact that the Khorog events were more of a popular resistance than a terror threat.

"What happened in Khorog is probably the tip of the iceberg as far as the GKNB's use of violence against political opponents and apparent involvement in criminal activities," said Susan Corke, director of Eurasia Programs at Freedom House. "The GKNB is a notoriously corrupt and repressive institution, allegedly involved in drug smuggling and openly engaged in repression of legitimate political dissent." And yet, last year the U.S. trained them in a curriculum that included "Basic and Advanced Combat Marksmanship, Crew Served Weapons Employment and Maintenance, Basic and Advanced CQC [close quarters combat]," etc.

A further issue with training counternarcotics forces, especially in Tajikistan, is the preponderance of evidence that the government is in fact tightly connected with the drug trafficking business. “Several high-level politicians and state ofﬁcials head (or have headed) some of the country’s largest drug trafﬁcking groups,” wrote (pdf) one group of researchers in a study of Tajikistan's drug trafficking. “In no other country of the world, except perhaps contemporary Afghanistan, can such a superimposition between drug traffickers and government officials be found.” And scholar Sebastian Peyrouse has noted that international efforts to help Tajikistan fight drug trafficking focus on small-time traffickers while ignoring the large-scale, government-connected smuggling -- in effect, helping the government-connected traffickers maintain their market share.

Anyway, it'll be interesting to see what happens to this level of military aid as the U.S. leaves the Manas air base in Kyrgyzstan and begins to pull out of Afghanistan. It would stand to reason that as instability is set to increase, the aid would ramp up. But the history of U.S. military aid to the region suggests the opposite: Most likely, it will decline as the U.S. need for access to Central Asia for the Afghanistan mission diminishes.