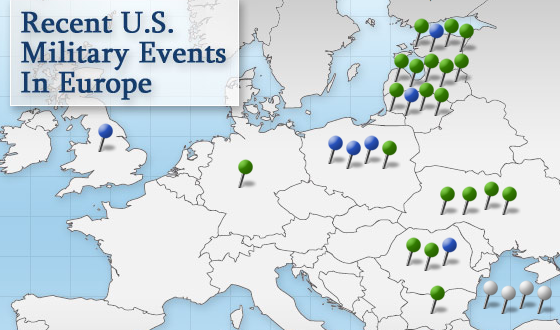 An ongoing Russian military buildup in Crimea could help Moscow to control the entire Black Sea, the top United States military official in Europe has said.

General Philip Breedlove, Commander of U.S. European Command, visited Kiev this week, and when reporters asked him about Russian military activities, he said the Pentagon was "very concerned":

[W]e are very concerned with the militarization of Crimea. We are concerned in two respects. One, that the military forces in Crimea constitute an illegal annexation of that piece of Ukraine and that these forces are able to hold that land and, in an extreme sense, could possibly produce force from that land.

Secondarily, we are concerned that the capabilities in Crimea that are being installed will bring effect to almost the entire Black Sea. And this is of concern. Costal defense cruise missiles, surface-to-air missiles and other capabilities that are able to exert military influence over the Black Sea. And finally, as you know, in March of this year the Defense Ministry of Russia announced that it would move nuclear capabilities into Crimea, and we continue to be concerned about this and watch for indications of it.

Russia has in fact moved aggressively to boost its military presence in the newly acquired territory. The same day that Breedlove spoke, Russia announced that it deployed 14 Su-27 and Su-30 jets to Crimea for "permanent basing." Shortly after the annexation it moved Bastion mobile coastal defense systems on to the peninsula, which "is significant in that they extend Russian coastal defence coverage across the southern coast of Ukraine, including the Black Sea port of Odessa, along with much of the Black Sea itself," wrote Jane's Defence Weekly.

Russia had already planned an expansion of its Black Sea Fleet and also is planning a further expansion of its land forces in Crimea, including a dedicated joint forces grouping, said Russian Defense Minister Sergey Shoigu earlier this month: “Analysis of the possible development of events dictates the necessity to maintain readiness of troops of the Southern Military District to ensure the military security of the country and its allies on the south-western strategic direction. In these conditions, the formation of a full-fledged and self-sufficient inter-branch grouping of forces on the Crimean Peninsula is a priority task,” Shoigu said.

Russia already had a substantial military presence on Crimea even when the peninsula was under Ukrainian control, but the agreement with the Ukrainian government regulating that presence imposed certain limitations on what Russia could deploy there.

"After the entrance of Crimea into Russia, the military units of the Black Sea Fleet will be able to carry out wider tasks, since they will be freed from the agreement with Ukraine which prevented the strengthening and modernization of Russian forces," wrote newspaper Gazeta.ru. "The fleet, to put it lightly, could not be used effectively, it couldn't solve security problems because of the limitations imposed by Ukraine. Now their hands are untied," military expert Igor Korotchenko told the newspaper.

However, to this point it's the U.S. and NATO military buildup in the region that is more noticeable. The U.S. has been carrying out a wide array of exercises and deployments around Russia's western borders; earlier this week the commander of U.S. Army forces in Europe discussed plans to position heavy equipment like tanks in an eastern NATO country and create a 4,000-strong NATO rapid reaction force for the region.

And it is those developments, Shoigu says, which are driving Russia's buildup: “In many respects, this is connected with the situation in Ukraine, with fomentation of anti-Russian moods on the part of NATO and reinforcement of foreign military presence in the immediate vicinity to our borders."

The military situation around the Black Sea is more active than it has been in a long time. The U.S. has been expanding its presence in Romania, with a new transit facility (moved from Kyrgyzstan), new missile defense systems and increased naval cooperation. Russia just cemented control over Abkhazia, with a new military-political agreement signed this week. And the wild card is Turkey, which while a U.S. and NATO ally, still jealously guards its role as the gatekeeper to the Black Sea. This is only going to get more complicated.