U.S. Warships In Sochi: For Olympic Security Or A Show Of Force? 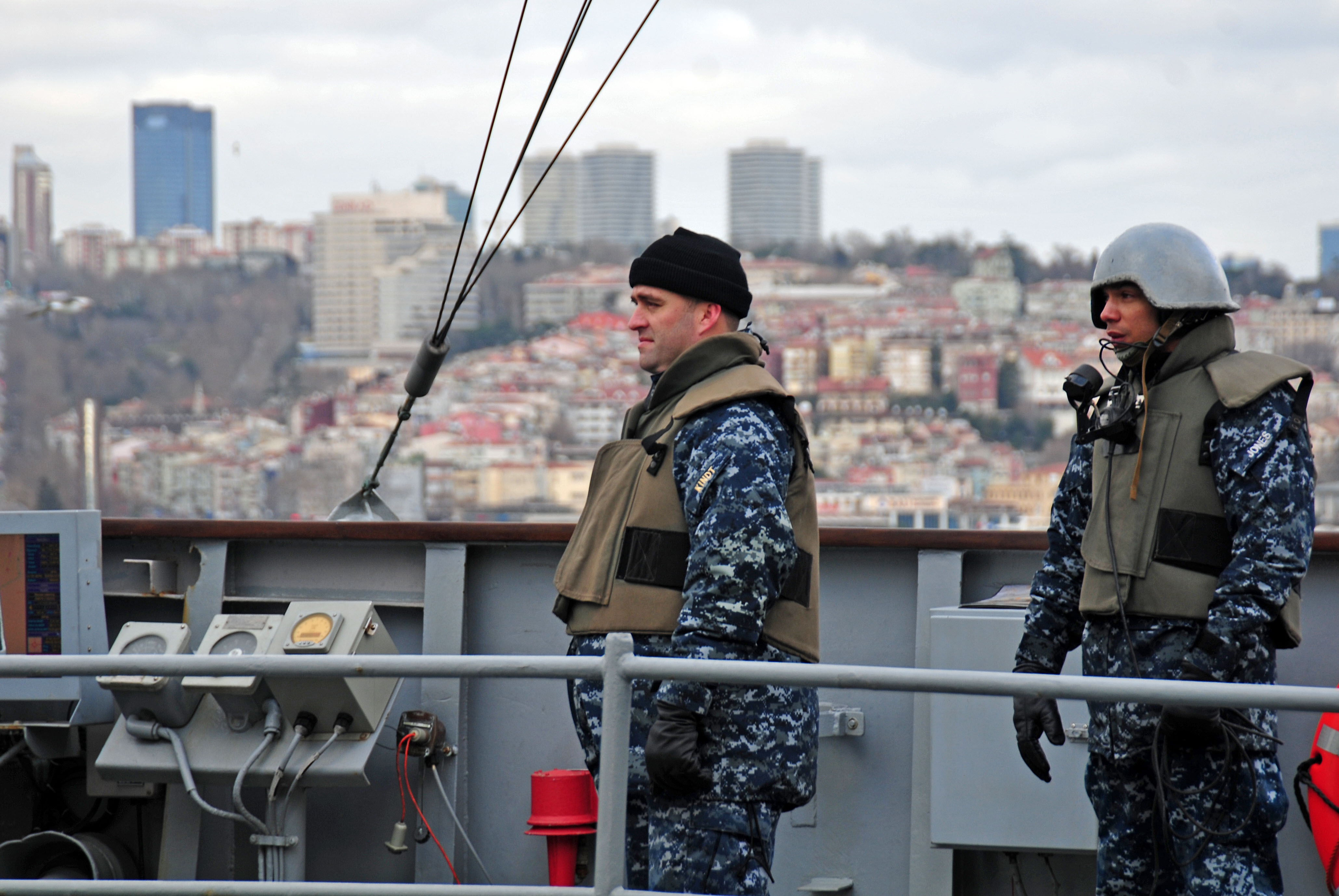 Two U.S. warships have entered the Black Sea in preparation for the Winter Olympics, kicking off Friday night in Sochi, Russia. The USS Mount Whitney passed through the Bosphorus into the Black Sea on February 4, and was followed the day after by the USS Taylor. The official announcement of the deployment from U.S. European Command did not mention Sochi: "Both ships will perform routine operations in the Black Sea to establish and enhance cooperation, mutual training and interoperability with regional partner nations and allies."

But it's clear that the visits to the Black Sea are timed for Sochi. The website Black Sea News reported that on February 6 the Mount Whitney reached a point about 20 miles off the coast of Sochi and began patrolling. The Mount Whitney is primarily a command-and-control ship, and Daniel Goure, a Washington-based defense analyst, told Military.com that "the communications assets of the USS Mount Whitney and the helicopter landing ability of both ships could provide a lily-pad type of presence in the event of crisis. 'You could deploy something off of the back of these ships if you had to operate,' he added. 'You also have command and control if you had to communicate with the Russian Navy and Coast Guard.'"

But another naval analyst, Cem Devrim Yaylali of the Bosphorus Naval News blog, said that the composition of the deployment suggested that the deployment was meant more for a show of force than for real security concerns. "The two U.S. Navy warships have only defensive weapons. And they have no means of projecting power from the ship to the shore. To my knowledge they do not carry and marines or any special forces teams to rescue civilians. Thus their mission is political rather practical," he told The Bug Pit.

Russian media reported widely, but erroneously, that a third ship, the destroyer USS Ramage, was joining the deployment. And as could be predicted, there have been a number of conspiracy theories around the deployment, such as that the ships are equipped with "psychotronic weapons" that can influence behavior from long distances. But for the most part the reaction seems muted. "The visit of the ships to the Black Sea is useful, of course, not just for the security of their athletes, they can at the same time carry out surveillance," former Russian Chief of Naval Staff Viktor Kravchenko told Izvestia. "But in any case the visit to the Black Sea doesn't violate any international laws."

Black Sea News summarized how they suppose the deployment came about:

Already on January 21, the U.S. offered help to Russia in antiterror security for the Sochi Olympics, including warships. As we understand, there either was no response from Russia or the response was something like "Thanks, but we'll manage by ourselves."

Then the Americans decided anyway to send two warships to the Black Sea, taking into consideration that in Sochi there is a probability of terrorist attacks and where a large number of American athletes and fans. And, in such a case, they would need to quickly evacuate them.

Ships from the U.S.'s Sixth Fleet, based in Italy and whose flagship is the Mount Whitney, are no stranger to the Black Sea, entering one or two times a year, Yaylali said. The visits of the fleet to Georgia are especially closely watched by Russia. While Russian media speculated that the ships may be visiting Georgia (encouraged by the fact that the Whitney's facebook page recently was updated to make its cover photo a shot of a previous visit to Batumi), While Izvestia concluded that that isn't likely, it nevertheless concludes that the visit is intended more than anything else to show the U.S. flag in Russia's backyard. "However, as reported by the Ministry of Defense of Georgia, the visit to Georgian ports of the American ships is not planned. The Black Sea coast of Ukraine is far from Sochi, and it's hardly worth expecting the ships to visit Odessa to support the 'maidan.' But the U.S. has already made the impression it hoped to."