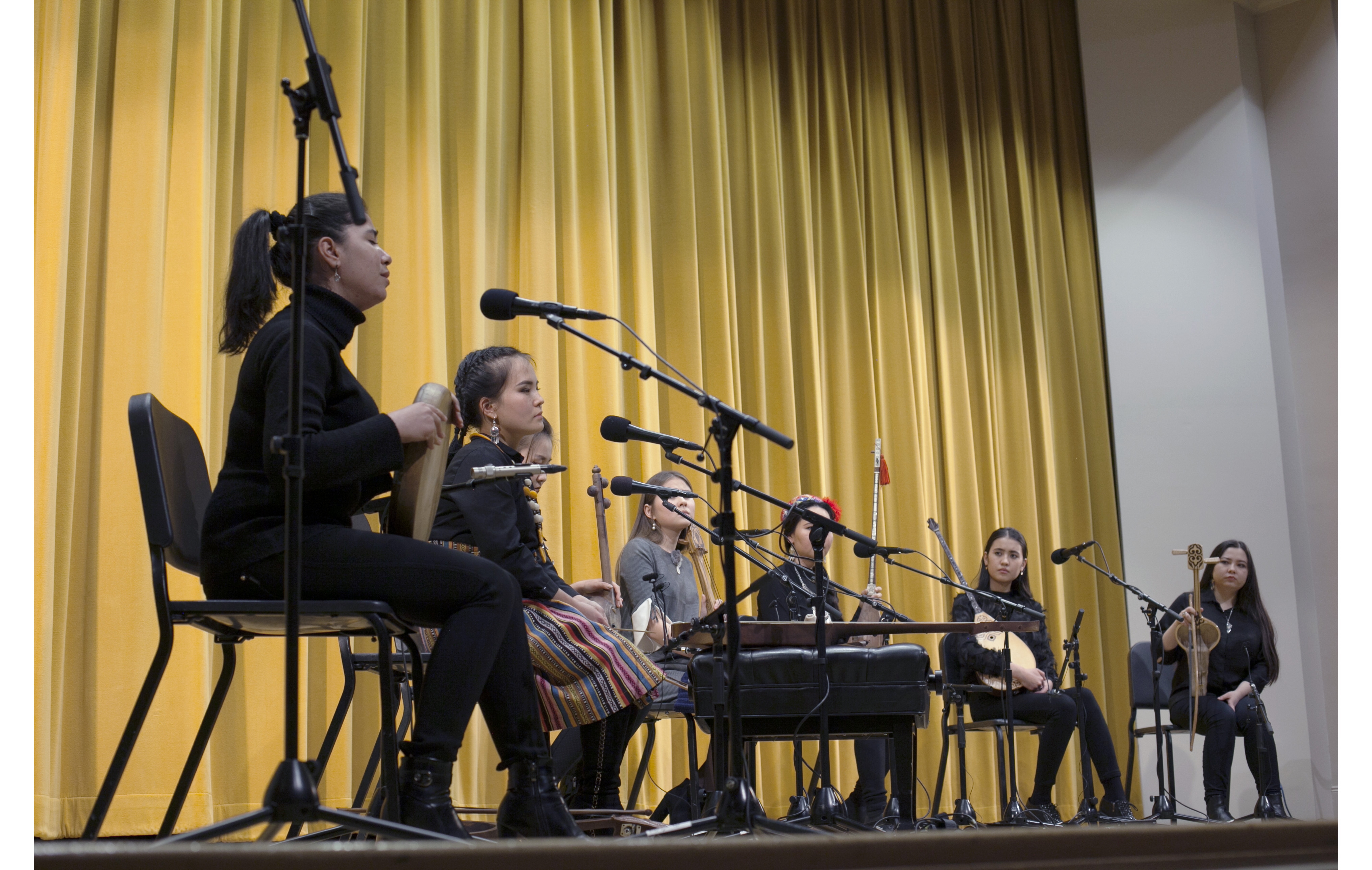 Artists from Qyrq Qyz give an ensemble performance at Harvard University on March 6, 2018. (Photo by David Trilling)

Put this in your mental blender: An ancient, good-versus-evil epic with a female lead, sonorous solo chants, and a chorus of stringed instruments decidedly unfamiliar to Western ears. This fusion of sensations might begin to conjure up a new multimedia project from Uzbekistan currently touring America and Europe.
Central Asia has a rich tradition of epic poetry. Many of the stories have adapted to the region’s different languages.

Few feature heroines, however, which is what makes Qyrq Qyz – “Forty Girls” – so unique. Qyrq Qyz is the legend of 16-year-old Gulayim and her 40 companions, who protect their clan from attackers after her father is killed in battle. After vanquishing the invaders, they build a just and compassionate society. Their story maintains a powerful appeal.

“When you speak to anyone in Central Asia, especially to women, and ask, ‘have you heard of the Qyrq Qyz,’ you will see an emotion. [They will say], ‘yes, it’s about these courageous 40 girls.’ But if you ask them [for details], they don’t really know,” Uzbek filmmaker Saodat Ismailova told Eurasianet.

The poem, Ismailova explains, holds “the collective memory of the region, of the five countries. It’s very much related to our land, but it’s also an empty space where you can use your creativity.”

Rather than just recite the epic, Ismailova has used that empty space to arrange a multimedia accompaniment of music and film. On stage, an octet of young female musicians from Kazakhstan, Kyrgyzstan and Uzbekistan play the temir komuz (a metal jaw harp), the qobyz (a two-stringed fiddle), the doira (a frame drum often covered with donkey hide). These “bardic divas” sing, perform and recite stanzas from Qyrq Qyz while Ismailova’s dreamy film features reenactments of Gulayim’s story.

Like other epics, such as Kyrgyzstan’s Manas or the Homeric poems, Qyrq Qyz was passed down orally for generations.

“The last reciter of the Qyrq Qyz who had received the epic through an unbroken oral chain of transmission, died in 2004,” said Theodore Levin, an ethnomusicologist at Dartmouth College who is co-producer of the Qyrq Qyz performance (with the support of the Aga Khan Music Initiative). “By training these young bards to recite the epic, we have in a sense rebooted the link to the oral tradition of Qyrq Qyz.”

One of the performers is Tokzhan Karatai, 23, a composer from Almaty, who has found differences and commonalities with the other musicians. “We are from one region,” she said after a performance at Harvard University on March 6. “But though we are [geographically] close, our music and our languages are close, we didn’t know a lot about each other.”

If those differences seem big to Karatai, they are almost insurmountable for audiences in the West.

“Nomadic music from Kazakhstan, from Kyrgyzstan, from Karakalpakstan, that is really like a black hole. Trying to fill that in is both a privilege for me as a producer but it’s also a little daunting because you really have to start from square one and explain to people what this is and what it’s about,” said Levin, who has distinguished himself as a leading expert on Central Asian music with his books and online resources.

Visitors traveling to Central Asia with high-level delegations or on tourist junkets often see a kitschy, canned version of local culture: colorful berobed characters greeting airplanes on the tarmac or serving up shashlik in cinderblock “yurts.” For the Qyrq Qyz team, the goal is more to share and explore the region’s culture, without the gimmicky trappings, while remembering that it is constantly evolving.

“Our objective is to help transmit and revitalize and further develop music and performing arts that are, as we put it, tradition-based, that are inspired but not constrained by tradition,” said Levin.

“I think [the Qyrq Qyz project] is a gateway to Central Asia,” Ismailova added, “not only to our culture, but to the creative potential of the region.”

Qyrq Qyz appears at the Brooklyn Academy of Music March 23 and 24, and opens at the Musée du quai Branly in May.