Eldor Shomurodov’s success making it into one of Europe’s most important national football leagues has generated a fresh flurry of ambition among young Uzbek players. 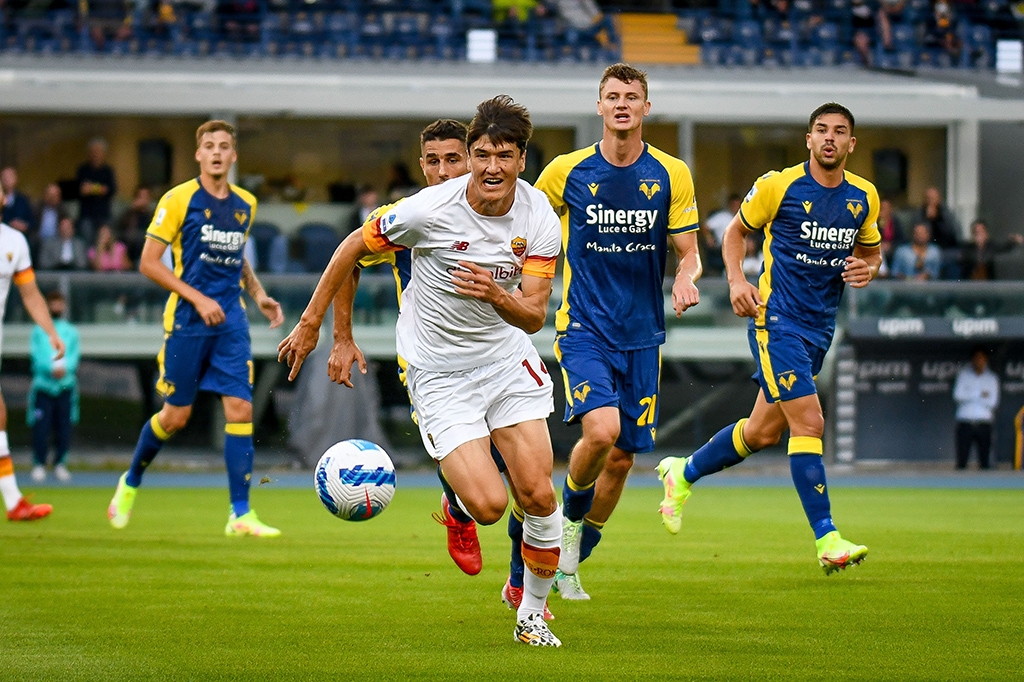 Shomurodov carrying the ball for Roma during a match against Verona last month. (Ettore Griffoni/Shutterstock)

Khadicha Shomurodova still could not hide her excitement when Eurasianet reached her.

Back on August 18 it was her birthday, and her soccer player grandson, Eldor Shomurodov, had scored for Italy’s Roma against Turkey’s Trabozonspor in a UEFA Europa Conference League qualifying match. It was the first goal Shomurodov had netted for Roma in a competitive encounter since being signed at the start of August.

Post-match interviews with goal scorers are usually tedious fare as players rehearse staid old lines such as how it is important to work as a team. Shomurodov, 26, speaking in his still-halting Italian, broke that mold and told the interviewer that the goal was a birthday present to his beloved grandmother.

“I was so excited, I cried with happiness. I wasn’t hearing the words of a grandson, it was a familiar, native voice,” she told Eurasianet.

Her thoughts were then seized by grandmotherly concern.

“I barely had time to say: ‘Thank you Eldor,’ before adding: ‘You fell a few times, I do hope all is OK with you.’ My heart hurts when I see the players fall to the ground. When Eldor falls, I whisper to myself, ‘Get up, my boy, get up,’” Khadicha said.

Khadicha is a matriarch to a family of soccer players, so she has long lost count of how many matches she has watched over her lifetime. But the games Eldor is playing are something special. He is the first of the Shomurodovs – and one of very few Uzbeks – to break into top-flight European football.

Her concerns about injuries are rooted in good cause.

Khadicha’s son and Eldor’s father, Azamat Shomurodov, played for Surkhon, a local team in Uzbekistan’s southern Surkhandaryo region, in the 1990s. But following a serious injury in a competitive match, he was forced into retirement.

With his ambitions in tatters, Azamat turned his energies onto ensuring one of his sons took up the dream of breaking into the professional soccer leagues.

His eldest son, Sanjar, now 40, played for Kashkadarya region’s FC Shurtan Guzar from 2008 to 2013. But that career too was cut short.

“In 2013, while training, I got a sprained tendon. I had to do four years of treatment. In 2017, I returned to competitive soccer playing for Surkhon Termez. But I only played another year before having to quit,” Sanjar told Eurasianet.

Sanjar is now the head of the Surkhandaryo region’s soccer federation. He doesn’t disguise the fact his pride in his brother in tinged with some professional jealousy.

“I sincerely envy my brother Eldor. But at least one of us has broken into European football! It was our family dream and ambition,” he told Eurasianet.

Eldor, who is 14 years Sanjar’s junior, was sent to the Mashal soccer academy, around 300 kilometers from his hometown of Jarkurgan, at the age of 11.

Jarkurgan is a small town of about 20,000 people around 70 kilometers from the border with Afghanistan. Summers are blisteringly hot – temperatures can reach around 50 degrees Celsius. A textile factory processing the cotton grown plentifully in the area is an important source of employment. 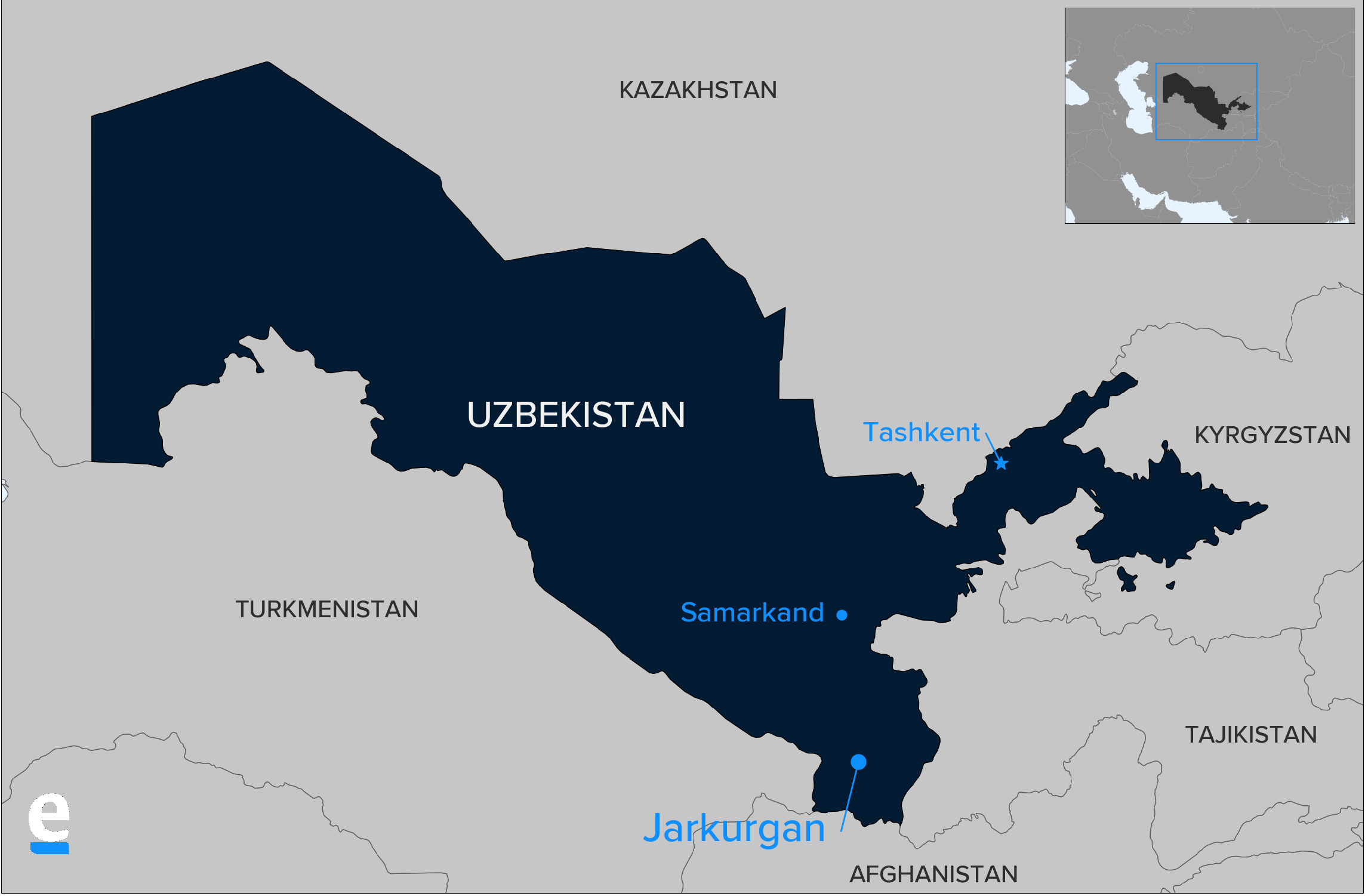 But all that has taken second place to the things that really matter in Jarkurgan today: AS Roma, the team’s mercurial Portuguese manager Jose Mourinho, and Eldor himself.

The last time Eldor was back in town was July. Unsurprisingly, with stints in Italian Serie A club Genoa, Russia’s Rostov and Uzbekistan’s Bunyodkor already under his belt, he was, as always, greeted as a major celebrity. Children lined up in droves to take selfies with, and get autographs from, the local hero. The Shomurodov family home is a generally unremarkable one-story building. Such is Eldor’s repute today, however, that even when he is not around, the home’s gates are open from morning until evening as well-wishers arrive to pay their regards.

“Eldor told me that there is a lot in common between Italians and Uzbeks. It turns out that Italians also love noisy family get-togethers, and like Uzbeks, they love their national cuisine,” Khadicha told Eurasianet. “He named several Italian dishes, but I can’t remember their names.”

When Eldor makes return visits to Uzbekistan, one of his first ports of call is to an orphanage in Termez, the capital of the region.

“There [at the orphanage], they are always expecting him. He brings gifts and financial support. Furthermore, we hold masterclasses at the Termez stadium, where up to 300 young footballers and Eldor fans get together,” Sanjar said.

Eldor’s success in making it into top-flight soccer in one of Europe’s most important national leagues has generated a fresh flurry of ambition among young Uzbek players. Thousands of children apply to enter soccer academies every year. The financial returns, even inside Uzbekistan, make the appeal obvious.

For the first time ever, Uzbekistan’s leading club, Pakhtakor, in June published the details of the incomes of players and coaches. Players, the club revealed, receive annual salaries worth around $15,000. But that is nothing compared to the $100,000 they are paid in performance-related bonuses.

The most common next step up is getting signed to a team in Russia or China, where the earnings are considerably greater.

Of course, when players do make it big and land on foreign shores, they must master entire new languages. Khadicha admits her grandson has struggled on that front in Italy, but she pleaded for his manager to be patient.

“After the match with Trabzonspor, Eldor said that he had had problems communicating with the coach, Mourinho, as he still does not know Italian that well. I am dreaming that my grandson will learn the language faster. And I want to tell Jose Mourinho that my Eldor will learn Italian, so don’t him scold him too much for now,” she said.