All the people released have expressed "remorse," in effect admitting culpability for criminal acts during July's unrest. 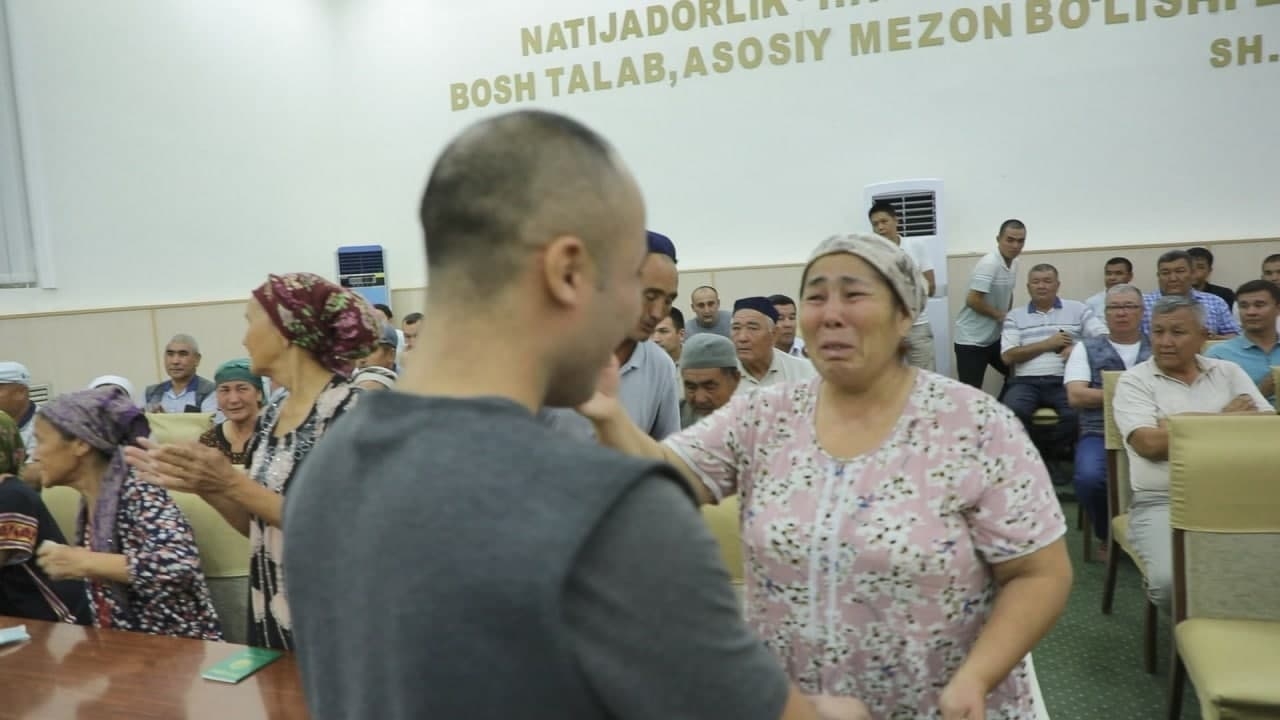 A woman greeting a relative released from detention in Karakalpakstan. (Photo: Independent commission)

Prosecutors in Uzbekistan have in an attempted gesture of goodwill released 24 people detained following early-July unrest in the Karakalpakstan autonomous republic and ordered them to be placed under house arrest.

The move comes in part in response to requests from a parliamentary commission currently investigating the causes of those disturbances in the city of Nukus, which led to the death of at least 18 people.

While the suspects have been freed from detention, they still remain under investigation and have been placed under “public supervision” – a condition apparently suggesting that the community is responsible for ensuring their good behavior.

“In making the decision, account was taken of the suspects’ remorse, the fact that they had small children, and difficult family situations, such as the fact that some of the detainees were the only breadwinners in their families,” the office of the public ombudsman, which made the news public on August 29, said in a statement.

Those allusions to remorse indicate that the detainees have in effect admitted culpability for criminal acts ahead of any prospective trial.

The ombudsman’s office said it was told by detainees in one-on-one conversations – a formulation intended to underline the absence of law enforcement representatives at the exchanges – that they had been “influenced by false information” and that they “did not have a good understanding of the situation” when they joined the protests in early July.

No details were provided about the specific acts allegedly committed by the released detainees.

More than 500 people were taken into custody by law enforcement during and shortly after the peak of the violence in the first days of July, but many were subsequently released, according to officials. It is not fully clear how many are still in detention and facing prosecution.

The Uzbek government has gone on a major public relations offensive to persuade its own public and the international community that it is being transparent and fair in its investigation of events in Karakalpakstan. The parliamentary commission established to assess how the violence erupted is viewed as key to that effort.

It is not yet clear, though, just how robust lawmakers from the rubber-stamp parliament will be in their evaluation of how the government handled the crisis.

The spark for the July 1 protests in Nukus that spiraled into violence ostensibly lay in proposed changes to the constitution that would have diluted the special status that Karakalpakstan enjoys as Uzbekistan’s only autonomous territory.

Under the current constitution, Karakalpakstan has been entitled to invoke a referendum to secede from Uzbekistan since 2013. Changes to the constitution, which were unveiled to the public late June, would have done away with that right.

Some disagreement surrounds the extent to which the government is supposed to have coordinated those plans with the public, however. An ombudsman update from August 19 on the activities of the ongoing parliamentary investigation cites unnamed figures – presumably lawmakers – as stating that sufficient efforts were made to ensure that the proposed constitutional reforms reflected the will of the population.

The unspoken implication of that position is that the protests in Nukus were not a genuine manifestation of anger sparked by a top-down decision devised without any public consultation and then sprung on unsuspecting Karakalpaks, but that the unrest was instead “prepared in advance.”

That view echoes the one expressed by President Shavkat Mirziyoyev in the days after the turmoil. While calling for an impartial investigation into the events in Karakalpakstan, Mirziyoyev speculated that the protests had been pre-planned with a view to undermining Uzbekistan’s sovereignty and sowing inter-ethnic conflict.

Mirziyoyev did not specify which foreign parties he believed to be responsible for the trouble.

Despite asserting that the protests in Nukus were contrived, Mirziyoyev quickly backtracked on the planned scrapping of Karakalpak autonomy.