Uzbekistan: A second coming for the Russian language?

Russian has, despite its official decline in status, managed to retain a firm toehold. 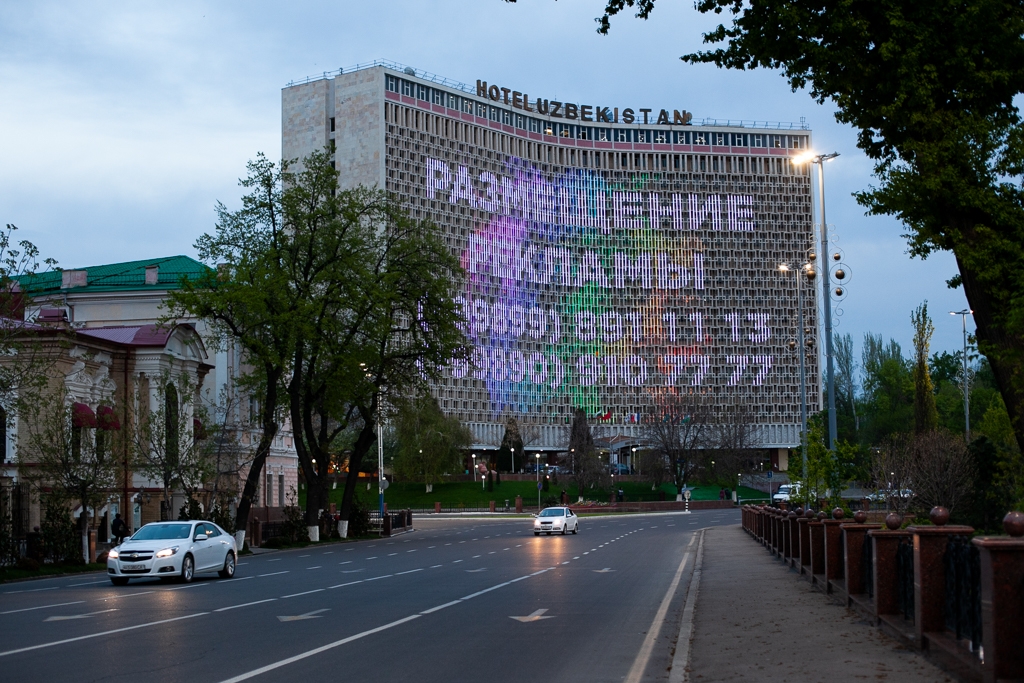 An ad, in Russian, for ads (David Trilling)

The turning point for Russian in Uzbekistan arrived in 1995. It was in that year that the late President Islam Karimov made Uzbek the country’s sole official language in an implicit effort to peel back his fledging nation’s Soviet legacy.

A few weeks ago, a group of Uzbek artists and intellectuals caused a major stir by urging a reversal of that decision and to revive the status of Russian as a language of “inter-ethnic communication.”

“Historically, it is through Russian that the population of Central Asia has been opened up not just to the great culture of multiethnic Russia and its neighbors, but also to the spiritual riches of Europe, the United States and even Arab and Asian countries,” argued the signatories of the petition, which was published in late April. “Young people ignorant of Cyrillic script have to some extent become semi-literate and been cut off from the rich culture of the last century.”

The proposal got immediate pushback on social media and by some well-known public figures.

The argument made by people like Sherzod Kudratkhodjayev, the head of Tashkent’s University of Journalism and Mass Communications, is that Uzbek has not yet been able to flourish into the default main language.

“Such an initiative would be, first of all, a blow to the [existing] state language,” he told the BBC’s Uzbek service in an interview after the petition did the rounds. “In the past 30 years, the Uzbek language has not been able to develop into a genuine state language, and the intelligentsia is to blame for that.”

As in Kazakhstan and Kyrgyzstan, although to a far lesser extent, the use of language in Uzbekistan can act as something of a social marker. Urban types often feel more comfortable using Russian, while Uzbek is wholly predominant in rural areas. The exception is pockets where minority groups like Tajiks and Karakalpaks are more numerous and consequently speak their own language.

Kudratkhodjayev at one stage became something of an unwitting poster boy for the kind of tensions that underlie these divisions. He achieved notoriety last September after somebody filmed and posted footage of him rebuking a local ethnic Russian woman for her inability to speak in Uzbek.

The backers of the reappraisal of Russian contend that their idea would in fact promote more unity. They point to the retention of English as an official language of India as a prime example of how an ostensibly foreign tongue can be useful.

Aziza Umarova, a businesswomen who recently announced her intention to run for parliament, thinks Russian is doing fine as it is in Uzbekistan, not least since it is already taught in schools and universities and regularly used on television.

“The real problem is with Uzbek [...] Young people still have not been given books in the Latin alphabet,” Umarova said.

In addition to downgrading Russian in the 1990s, Uzbekistan also on paper adopted the Latin alphabet, instead of the Cyrillic used by several Slavic languages. In reality, the switchover has been extremely patchy and inconsistent, and the volume of books available in Latin script is still quite small. This failure to nourish Uzbek has damaged the language and led to the kind of crude form often seen on social media, Umarova argued.

Russian has, despite its official decline in status, managed to retain a considerable presence.

The Tashkent branch of Rossotrudnichestvo, Russia’s state-run cultural and humanitarian cooperation agency, estimates that around 11.8 million people in Uzbekistan speak Russian. That is about one-third of the population.

In 1992, there were more than 1,100 Russian- or mixed Russian and Uzbek-language schools. Now there is a still respectable 862 Russian-language schools. In Tashkent and other major cities, cable television companies offer packages consisting of foreign programming largely in Russian.

And Russian firmly remains the language of business. Its role is unmatched in the corporate world and even advertising.

No less significant than all that is the appeal retained by Russian higher education. There are about 25,000 students from Uzbekistan currently at universities in Russia.

The people behind the April petition played into the suspicions of the small but vocal, self-styled anti-colonialist crowd, however, when they included in their arguments the fact that relations between Uzbekistan and Russia are on the ascendant.

“At the moment, there is an intensive process of political and economic integration among Central Asia states, where, if you consider the fundamental differences between the Turkic and Tajik languages, Russian is simply indispensable for effective cooperation,” they wrote.

“It is no coincidence that in the Commonwealth of Independent States, the Shanghai Cooperation Organization, the Eurasian Economic Union, the Collective Security Treaty Organization and in other blocs, the working language is Russian,” the petition’s authors noted, alluding to a number of Moscow-dominated groupings.

Bilateral economic ties have grown notably stronger. Trade was up by 21 percent year-on-year in 2018. When Russian President Vladimir Putin came visiting in October, Tashkent rolled out the red carpet with some fanfare. His stay coincided with the signing of $27 billion in commercial deals, according to Uzbekistan’s Economy Ministry.

All this makes political analysts like Rafael Sattarov dismissive of the notion that the Kremlin’s machinations should be detected behind this long-standing conversation about language.

“Even without the ‘Russian world,’ the Uzbek regime and economy is dependent on Russia,” Sattarov told Eurasianet. “It is foolish to look for some kind of mysterious plot in the actions of some representatives of the intelligentsia.”