“They don’t have enough drugs. Don’t believe the statistics.” 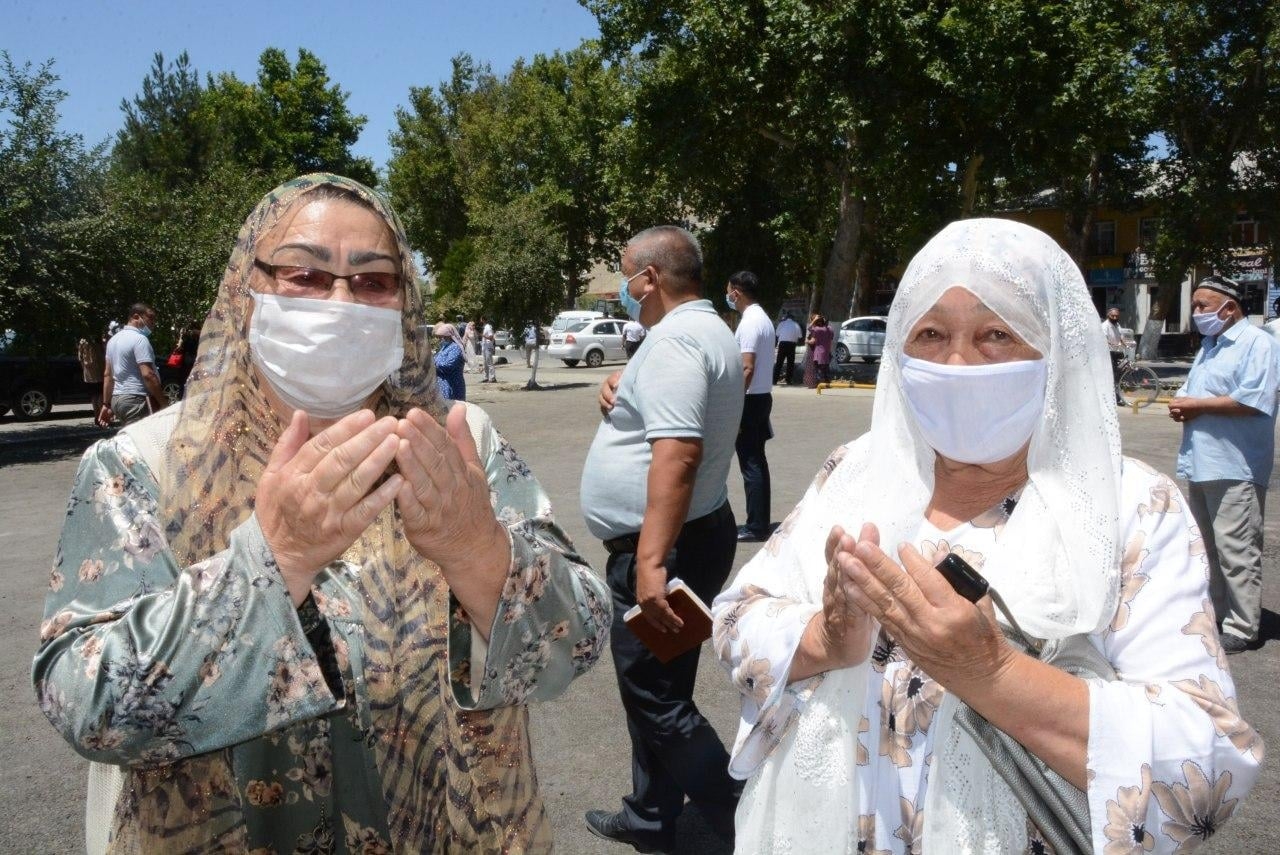 Not much left to do but pray (photo: Fergana regional government)

That was the stark first line of a Twitter thread by film director Sarvar Karimov. What followed in the message, written on July 17, was a powerful denunciation of the state of Uzbekistan’s healthcare system.

“[He died] with the coronavirus. But he was not diagnosed. We treated him at home for a week. When we called an ambulance, they said they would not be able to come if he was running a temperature. And I can understand them. They don’t have enough drugs. Don’t believe the statistics. Take care of yourselves and your loved ones.”

The condemnation stands in strong contrast with the generally upbeat epidemiological picture that had for many weeks been offered by the government and state-loyal journalists. In that story too, Uzbekistan was struggling, but nowhere near as badly as neighbors Kazakhstan and Kyrgyzstan.

According to figures from July 23, there had been a total of 18,868 recorded cases of coronavirus since the emergency began in March. Of that total, however, more than 10,000 are said to have recovered. The latest total caseloads in less populous Kazakhstan and Kyrgyzstan are 78,500 and 31,250, respectively.

For a country of more than 34 million people, the figure of 8,000 active cases might not appear large, but medical officials were nonetheless sounding the alarm earlier this month, saying the health system was on the cusp of reaching full capacity. Even private care is often unavailable.

“My 63-year-old father … lay sick at home for six days,” Karimov told Eurasianet. “We tried to treat him ourselves. Private clinics refused to admit him, they told us that they had no tests.”

By the time Karimov managed to get his father into a hospital, on July 16, it was too late. He died the next day.

Within days of Uzbekistan recording its first COVID-19 case, in mid-March, the authorities sprang into action – far faster than almost any Western country did. Restaurants and cafés were ordered to close. Citizens were told to work from home whenever possible. On March 24, a strict lockdown went into effect. The restrictions were efficiently enforced and seemed to have had the desired effect, at least according to official data. By just after the middle of April, the number of active cases had peaked at around 1,360.

Concerned over the economic effects of the lockdown, and especially the alarming rate of unemployment, the government moved to loosen restrictions in early May. But that only led to a huge surge of new infections. And even then, the data appears highly incomplete.

Only a few media outlets have at times raised their head over the parapet to cast doubt on the official line.

Podrobno.uz carried a story on July 22 about a woman it identified only with the name Nargiza. The piece talks about how Nargiza was compelled to treat herself, as well as her husband and her 10-year-old child, at home. When she first fell ill, she sought professional medical assistance and was advised by a doctor to buy ginger and apply it to her head and legs. She was further advised to take the antiviral drug Kagocel and consume more hot water.

The situation was bad enough by July 8 that Khabibulla Akilov, spokesman for the government’s coronavirus crisis center, was warning that the healthcare system would face total collapse if the rate of daily new cases increased to 1,000. Even though that threshold has not officially been reached, the system is failing in significant ways.

People with urgent conditions, such as broken limbs, often find they cannot get through to the 103 emergency telephone number. At least 43 are said to have died in the capital, Tashkent, over a three-day period to July 16, because they could not get ambulances to come to their homes.

As of July 20, emergency services in Tashkent, which is where the vast majority of coronavirus infections have been registered, were receiving 6,000 calls every day. Health authorities have sought to remedy the situation by dramatically boosting the size of the ambulance fleet.

It still has not been enough. So much so that when General Prosecutor Nigmatilla Yuldashev told state news broadcaster Uzbekiston-24 in an interview in mid-July that the president had issued instructions that ambulances should arrive within 15 minutes of a 103 call, the remarks were met by the public and medical professionals not with optimism and hope but with mocking amusement.

Difficulties summoning ambulances are understood to be greater in the regions.

Resources are in short supply too. Authorities claim to have administered more than 1.3 million tests, although there is no credible way to verify that figure or whether the tests are reliable. What is clearer is that tests are difficult to get, even in Tashkent.

Pharmacies are running short of antiviral and fever-reducing drugs. There are many anecdotal accounts of drugs increasing in prices seven- or eight-fold.

Six months ago, Nigora, 30, was working as a doctor at a district polyclinic. Now she is on leave and expecting a child. But still, twice a day she heads out to Farobi Street, which is known for having dozens of pharmacies.

“My sister has complications and is being treated here nearby, at the Tashkent Medical Academy. They administer her the minimum amount of medicine. The rest we find ourselves, and if we find it, we buy it ourselves,” Nigora told Eurasianet. “Prices are rising every day. But we’re hanging on, things could be worse.”

In normal times, the intersection at Tashkent’s Republican Pathological Anatomical Center, which is in effect the largest morgue in Uzbekistan, is pretty sleepy. Traffic jams are a rare sight. That has changed lately, though. In recent days, there are routinely dozens of cars parked outside. People have to wait for hours to collect the bodies of their deceased relatives.

But these are not known coronavirus fatalities. They are mostly people who died because they could not get necessary medical treatment in good time, because of the COVID-19 emergency. In Britain, medical experts have been sounding the alarm about a future surge of excess mortality due to chronic conditions either not being diagnosed or properly treated by an overstretched health care system. In Uzbekistan, that appears to be happening already.

“The hospital where my sister is being treated is short of medicine. Scheduled surgeries are being canceled,” Nigora said.

This likelihood was flagged up earlier this month by Akilov, the coronavirus center spokesman, one of only a few officials to have spoken so candidly. As many hospitals are being converted into coronavirus-specific facilities, people with non-COVID-19 health issues are out of luck.

On July 5, officials sought to ease the burden on the system by issuing instructions on home care. More than 1,700 people are in that way currently avoiding going into isolation wards or hospitals and treating themselves instead.

Uzbekistan has to date demurred in copying an approach recently adopted by neighboring Kazakhstan and Kyrgyzstan, where pneumonia cases that have not been definitively determined to be caused by coronavirus infections are nonetheless pooled into one dataset. That protocol is giving a clearer picture of the health crisis gripping those countries, but Uzbek President Shavkat Mirziyoyev indicated as recently as July 23 that he is not planning to go down that road. And yet, in a cognitively disorienting point made during the same government briefing, Mirziyoyev stated that an additional 46,500 beds had been set aside for coronavirus patients, and that another 31,000 beds have been earmarked. These are colossal numbers considering that there are purportedly only 8,000 currently active cases.

The consistently and seemingly misleading rose-tinted state-aligned media coverage of the epidemic – much of it has been focused on happy stories of discharged patients – may have had ruinous repercussions. As soon as the first lockdown was lifted, life returned to normal in significant ways. Couples held weddings, sometimes on the sly, to evade crowd restrictions, and families reunited for get-togethers.

The government introduced a second lockdown on July 10, but the evidence is that compliance is weaker than it was the first time around.

Psychologist Boboyor Turayev contends that the handling of the emergency is only eroding public trust in the authorities.

“This is a total horror. The state administration of our country just does not know how to work. It is a disgrace,” Turayev said.

Turayev too has lost people in his immediate family to pathologies bearing COVID-19-type symptoms.

“My aunt was a bright young woman, a very level-headed person. She got a fever. For three days, we went to clinics. Nobody would admit her, no tests were done. We buried her yesterday,” Turayev told Eurasianet.

In the Karimov household, there is little time to grieve. The family is still dealing with a health emergency. Seven family members have tested positive for coronavirus. He and his wife somehow managed to elude infection. The rest have been hospitalized.

Karimov is dismayed that the government was unable, despite its initial head-start, to contain and manage this outbreak.

“Why are there not enough ambulances, doctors, nurses and hospital beds?” he asked. “After all, this is already the fourth month of the pandemic. This should all have been anticipated.”