But Tashkent will have to do its own legwork in new strategic partnership. 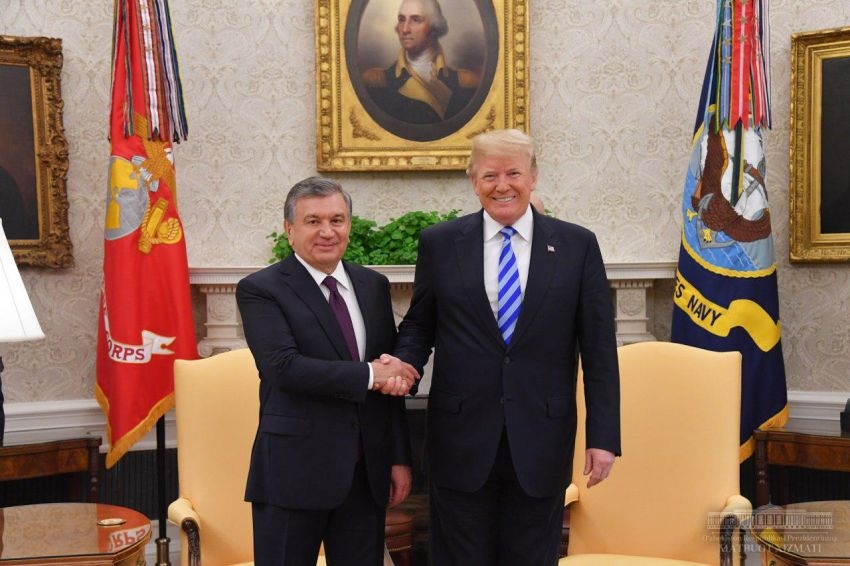 As the Washington rain beat down during the conclusion of Uzbek President Shavkat Mirziyoyev’s first official visit to the United States, both sides were readying to present the trip as a glowing success.

U.S. President Donald Trump appeared still to be locked in solemn exchanges with Mirziyoyev at the door of the White House as the Uzbek leader departed. When they will next pick up the conversation is anyone’s guess.

"We've been working very closely together on different things, including trade. They've actually made investments here. We make investments there," Trump said during a May 16 press briefing, without getting into specifics.

"We're working together from the standpoint of the military, including his purchase of equipment and military equipment from the United States," he added.

Mirziyoyev, said Trump, in what probably wasn’t intended as a backhanded compliment, “is a man very respected in his country.”

Since the 9/11 attacks, Washington’s perceptions of Tashkent have been heavily colored by the war in Afghanistan. The nadir of relations came in 2005, when Uzbekistan was still highly useful to the United States as a hub for military operations. After Washington criticized a brutal crackdown on protests in the eastern town of Andijan, Uzbekistan’s then-leader Islam Karimov ordered the closure of the U.S. military base in the country.

Mirziyoyev, who arrived in Washington amid a crescendo of praise as the man overhauling Karimov's system, would be forgiven for reflecting on his predecessor’s luck.

Agreements struck at the Trump-Mirziyoyev meet this week included a first-ever Five-Year Plan of Military Cooperation, according to a White House press release, which hailed "a New Era of Strategic Partnership".

What Tashkent will want to know is what kind of freebies might be available as part of these agreements, particularly regarding WTO accession. Given the Trump administration’s general aversion to foreign aid and Afghanistan’s declining importance to the U.S., expectations may already be conservative.

More curious are the 20 “major business deals” Uzbekistan signed with U.S. companies worth $4.8 billion during Mirziyoyev’s visit. “If fully implemented,” the deals “could sustain more than 10,000 U.S. jobs and open opportunities for billions of dollars in future U.S. contracts,” according to the White House release.

With little information on these deals coming from either side, they are difficult to scrutinize.

But the statement's reference to American jobs, as well as Mirziyoyev’s comment after talks that Uzbekistan “has been procuring from the U.S. a lot of technology as well as equipment,” suggest few of the deals are the kind of direct foreign investments Tashkent craves.

For a comparison in terms of figures, when Mirziyoyev visited Russian leader Vladimir Putin in April last year the pair signed trade and investment agreements worth $15.8 billion. Visiting Xi Jinping in China a month later, Mirziyoyev came away with deals worth $20 billion according to Uzbek state media. (Chinese state media was more restrained, putting the figure at “over $10 billion”). The supposed value of the U.S.-Uzbekistan deals does, however, eclipse those signed by Mirziyoyev and Turkish President Recep Tayyip Erdogan last month which were placed at $3 billion.

In some ways, Uzbekistan’s new moment, following nearly three decades of excess authoritarianism under Karimov, is wasted on a president like Trump. His administration has publicly de-prioritized human rights in its foreign policy and prepared huge cuts to the State Department, which is one avenue through which partners are sometimes rewarded for good behavior.

While the White House press release said Trump had “recognized the country’s tremendous progress on important political, economic, and social reforms," Trump made no mention of them in the pair’s public appearance.

Significantly, when Mirziyoyev graciously praised Trump for his economic policies, including his aggressive tax cuts, Trump missed a golden opportunity to return the compliment.

Instead, he responded with typical conceit: “I agree, 100%!”

This is not to say Uzbekistan has no strategic importance whatsoever to the United States. Particularly notable in the White House statement was a reference to Mirziyoyev’s “efforts to convene Central Asian leaders for a cooperative dialogue.”

The new Uzbek leader’s energetic regional diplomacy – contrasting strongly with the hostile, stick-in-the-mud stance of the Karimov era – is perhaps Washington’s best hope for diluting Russian influence in a part of the world it has rarely understood.

Ultimately, however, geography is all-determining.

Beyond scaled-down U.S. operations in Afghanistan, which Uzbekistan has said it will continue to support as a transit country, the two have few binding ties.

The question, then, is not whether the U.S. appreciates a more receptive and tactile Tashkent – most countries will – but the extents it is prepared to go to to show that appreciation.