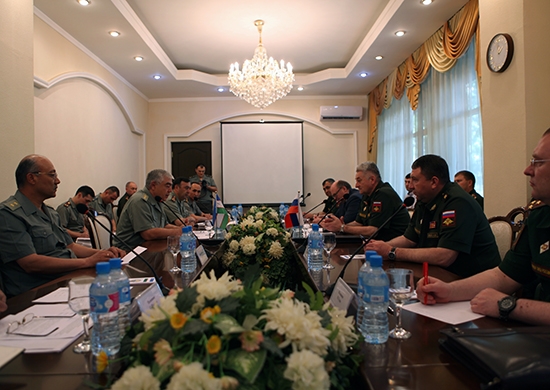 This October, Uzbekistan and Russia will hold their first joint military exercises since 2005, a dramatic move away from the anti-Russian policy of recently departed president Islam Karimov.

The planned exercises were announced by Colonel Yaroslav Roshchupkin, a spokesman for Russia's Central Military District, on July 3. Few details were announced, except that they'll be held at the tactical level at Uzbekistan's Forish training facility about 250 kilometers southeast of Tashkent.

Roshchupkin also noted that these would be the first joint drills between the two countries since September 2005. That was a geopolitically fraught period, coming just months after Uzbekistan had evicted the United States military from an air base it had used at Karshi Khanabad in support of operations in Afghanistan.

That resulted in strict military sanctions by the U.S. and Europe against Uzbekistan, and Tashkent then had a brief rebound relationship with Moscow. Those sanctions were gradually relaxed as Uzbekistan again became a key partner in the fight in Afghanistan, this time as a transit corridor.

This all seemed to be driven by Karimov's personal distrust of Russia, but his death last year and replacement by new president Shavkat Mirziyoyev has opened up a lot of the doors that Karimov had closed. One sign of this was Uzbekistan's participation, albeit limited, in recent Russia-led counterterror drills in Tajikistan.

Roshchupkin alluded to other potential forms of expanding cooperation:

The working meeting between the delegations of the Russian and Uzbek Defense Minsitries led by Commander of the Central Military District, Colonel-General Vladimir Zarudnitsky, and Uzbekistan’s Defense Minister, Colonel-General Kabul Berdiyev, has ended in Tashkent. During the meeting, the parties discussed the situation in the Central Asian region reaffirming their interest in developing cooperation. Staff talks that will focus on regional security issues, the joint tactical exercise at Uzbekistan's Forish ground and other events will be held as part of this cooperation.

The most closely watched issue will be whether Uzbekistan seeks to rejoin the Collective Security Treaty Organization, the Russia-led group that Uzbekistan left in 2012. Russia has made no secret of its desire to get Uzbekistan back into the CSTO fold, and no doubt that was part of the "regional security issues" discussion.

Mirziyoyev's arrival has given Moscow new hope for Uzbekistan's return to the CSTO, said Evgeniy Buzhinskiy, the former head of the international cooperation section of the Russian ministry of defense. "No doubt with the change of leadership their position has changed," he said in an interview with RIA Novosti. "If they start to cooperate with us along military lines, that's very good."

He continued: "If military cooperation is begun, then I think they [Uzbekistan] will return to full membership in the CSTO... Exercises -- this is significantly bigger than, say, staff discussions." The joint exercises "would already be significant progress," he said.

Is this wishful thinking on Moscow's part? We'll see.