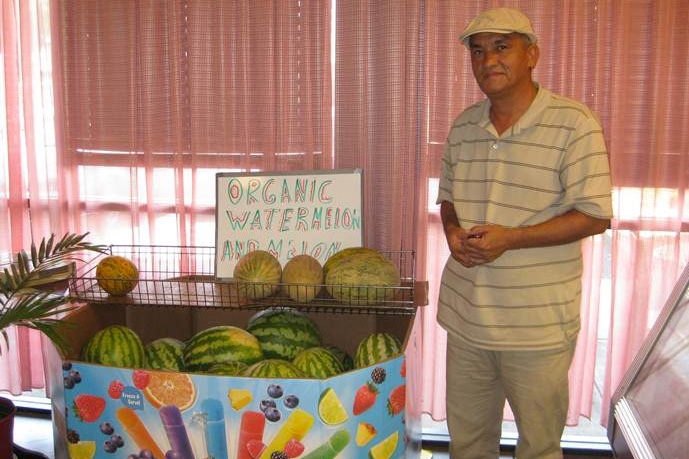 Rakhmat Kobilov sells some of his watermelons and Ferghana-style cantaloupes at an Uzbek restaurant in Phoenix. (Photo: Matthew Kupfer)

During the summer, Rakhmat Kobilov rises at 4 am, eats breakfast, and drives 45 miles to the farm where he cultivates cucumbers, watermelon, and a fragrant variety of cantaloupe indigenous to Uzbekistan’s Fergana Valley.

The routine is familiar to him, even though Kobilov is not in his native Uzbekistan. Instead, he lives a world away in Phoenix, Arizona, where he and more than 100 other Uzbek refugees settled after the 2005 Andijan massacre.

For all that has changed in their lives since 2005, the Andijan refugees’ values have remained remarkably constant. Since arriving in Phoenix, they have built a tight-knit and entrepreneurial community, much like an Uzbek mahallah, or neighborhood. They live together, work together, and help each other.

“In Uzbek culture everything is done together. We are used to living this way,” Kobilov said, speaking in Russian. “In America you don’t know who lives on your street, but in Uzbekistan you know everyone for five miles.”

Like many other Uzbeks in Phoenix, Kobilov fled his homeland after Uzbekistani security forces fired on a protest he attended in the city of Andijan on May 13, 2005, reportedly killing several hundred people. After escaping across the border, he spent two months in Kyrgyzstan before transferring to a refugee camp in Romania.

When the United States accepted a few hundred Uzbeks from the camp as refugees six months later, the largest group was settled in Phoenix. Kobilov, however, was placed in Kentucky and later moved to Ohio.

In 2008, he moved to Phoenix to join the people he had met in the refugee camp. He took up the work he had done for 15 years in Uzbekistan – farming. Today, with some help from the International Rescue Committee (IRC), Kobilov leases and cultivates five acres, selling his organic produce at farmers’ markets across the Phoenix metropolitan area.

He also serves as vice president of the IRC’s Gila Farm Collective. (The refugee-run collective was formed in 2011 to help refugee farmers in the Phoenix area sell their produce, purchase insurance, and share knowledge. Its members hail from countries as diverse as Iraq, Burma, and Sudan).

Learning to grow crops in the Arizona climate – hot and dry, even by Uzbekistan’s standards – has been a challenge, Kobilov admits. But nevertheless his melons are gaining a reputation and customers now recognize him and his produce at farmers’ markets.

“It’s very difficult to grow organically, but our clients love the taste,” he told EurasiaNet.org. Kobilov refers to “our” clients because he is seldom alone on the farm. Jessica Woiderski, who coordinates the IRC’s farm collective, sees cooperation as a hallmark of the Uzbek community.

“If it’s planting time, if it’s weeding time, you will have 15 to 30 Uzbeks out at the farm. They are not farmers. They may be running businesses, they may be in school, they may have jobs, but they will come out and help the farmers,” Woiderski said.

This spirit of collective work carries over to other enterprises, too. Andijan refugees have opened around 10 businesses in the Phoenix area, including a grocery store, an auto repair shop, a taxi service, and a halal restaurant specializing in Uzbek and Mediterranean cuisine.

“They are an incredibly entrepreneurial group,” said Jim Mullins, vice president of Peace Catalyst International, a faith-based Christian organization that promotes dialogue between Christians and Muslims and that has worked with the Uzbek community. “But they also have a real sense of social responsibility and they’re willing to make financial sacrifices for the sake of their neighbor.”

For all the successes the Phoenix Uzbek community has had, their lives are not easy. The community remains virtually all male, and many of the refugees haven’t seen their families for years. Some struggle to find good sources of income. (Although many Uzbeks moved to Phoenix from other cities around the United States to be with their community, in recent months they have increasingly been leaving for San Diego to work as taxi drivers.)

The Phoenix Uzbeks also seem eager to put the past behind them. Though a small group of activists continues to raise awareness about the events of 2005, nearly seven years on, many prefer not to discuss them. Some say they are simply tired, having recounted their traumatic experiences to countless journalists and aid workers when they first arrived. But one member of the community, who declined to give his name, said he stopped talking when he realized that it was not bringing about any change in Uzbekistan. “I saw it didn’t yield a result, and so I decided it wasn’t worth it,” he said.
Kobilov agrees that they are tired, but frames his position differently. “We just want to live and help our community,” he said. “I don’t want to talk about politics. I don’t want to say anything bad about my country. I haven’t seen it for [going on] eight years.”

He is adamant when he says he wants to return to Uzbekistan, where his children and relatives live. But he is also grateful for his experiences in the United States, specifically his exposure to American farming methods. “When I go back, I want to bring something valuable with me for the Uzbek people,” he said, referring to his agricultural knowledge.