A Eurasianet correspondent was detained for more than an hour after interviewing relatives of detainees. 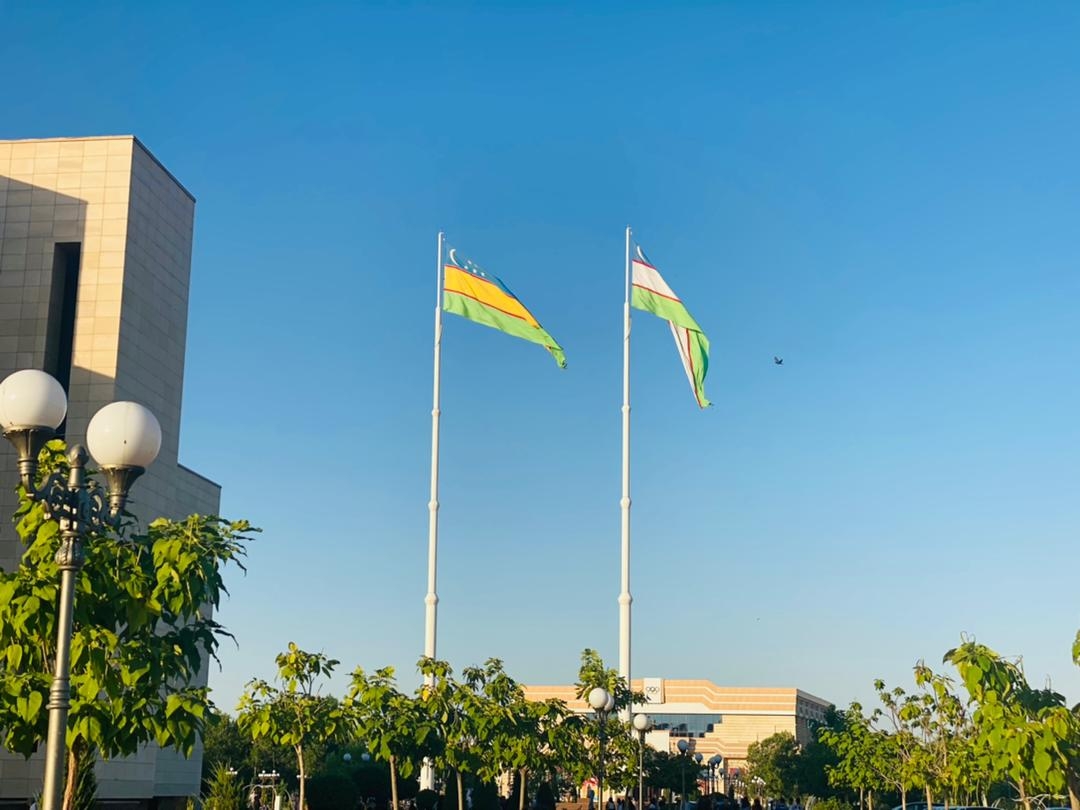 Authorities in Uzbekistan have said that 18 people were killed during last week’s unrest in the semi-autonomous republic of Karakalpakstan.

Davron Dzhumanazarov, a spokesman for the National Guard, said in a briefing on July 4 that 516 people were detained following clashes between police and demonstrators sparked by plans to strip Karakalpakstan of its autonomy. Some of the detained have been released, but no figures have been disclosed.

In a measure of the government’s alarm over ferment in the western republic, which occupies a swathe of land that accounts for around one-third of the country’s territory, President Shavkat Mirziyoyev flew there on July 2 and pledged to scrap proposed constitutional amendments that would have spelled the end to any form of local self-governance.

Around 200 people were waiting outside the main police precinct in Nukus, the capital of Karakalpakstan, in the afternoon on July 4 hoping to find out if their relatives were among the detained.

A Eurasianet correspondent watched as police officers periodically emerged from the building to call out the name of detainees over a megaphone. When the correspondent attempted to interview people in the crowd, she was detained by the police for more than an hour. Police deleted the footage on her phone and issued veiled warnings for her to desist from further reporting.

Prosecutors have said that they are pursuing criminal investigations on a number of counts. One claim is that the demonstrators were attempting to seize power.

In their tally of the turmoil that swept through Nukus on July 1, officials have said that 243 people were injured. Of those, 38 were law enforcement officers. One National Guardsman is said to have sustained three gunshot wounds to the chest.

Fully 94 people are being treated in hospitals for their wounds. Some are in a grave condition.

No details have been provided as to the cause of death of the civilian fatalities. 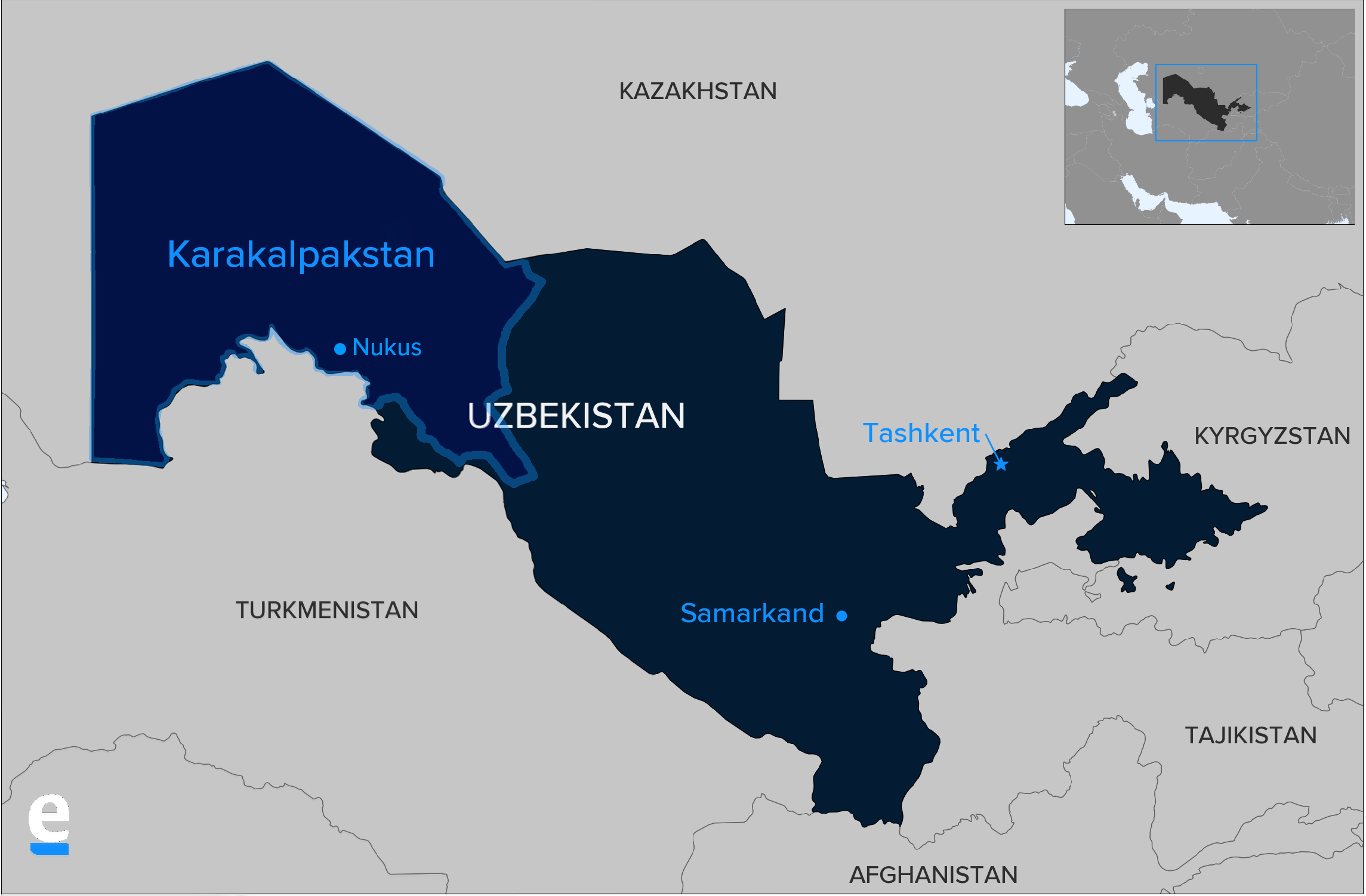 The entirety of Karakalpakstan is currently subject to a state of emergency that is to remain in place until August 2. The authorities have said this was done to "ensure the safety of citizens, protect their rights and freedoms, and to restore law and order.” Fifty-eight people have been detained so far for failing to abide by the terms of the nighttime curfew.

Details remain sparse as to what precisely triggered the large-scale violence.

A crowd of many thousands of demonstrators gathered in a square in front of the Nukus farmers’ bazaar in the afternoon of July 1. Later, this mass of people moved in the direction of the Karakalpak legislative council, known as the Jokargy Kenes, which serves as the local seat of power in the republic.

Some of the scant footage that residents have managed to get out, despite the internet outage imposed by the government, shows what appears to be stun and smoke grenades being deployed against the crowd outside the Jokargy Kenes late on July 1. Officials say groups of violent demonstrators were attempting to seize government buildings.

Assorted audiovisual material circulating on social media shows only snapshots of the incidents presumed to have occurred in and around Nukus on July 1-2.

One piece of footage shows the aftermath of water cannons dispersing protestors. Several other bits of film attest to the serious and sometimes fatal-appearing injuries sustained by demonstrators. A scene apparently captured on a mobile phone from an apartment building shows several police officers beating a prostrate man with their clubs. There is also filmed evidence that government troops at times came under assault from groups of men, although there is no clarity as to when and why this occurred.

Getting even a partial picture of the events has been severely hindered by the government resorting to censorship. As well as the internet being down, local media outlets appear to have been warned, at the height of the unrest, against reporting on events.

On July 1, even before the serious unrest had erupted, the security services detained local journalist Lolagul Kallykhanova, allegedly after she uploaded a video appeal calling for Karakalpakstan to secede. It is understood that she is being held in the capital, Tashkent, although her sister has told Eurasianet that she cannot reach her.

“Calls for separatism and mass riots will be firmly crushed in line with the current legislation. Those responsible for this will suffer inevitable punishment,” he said.