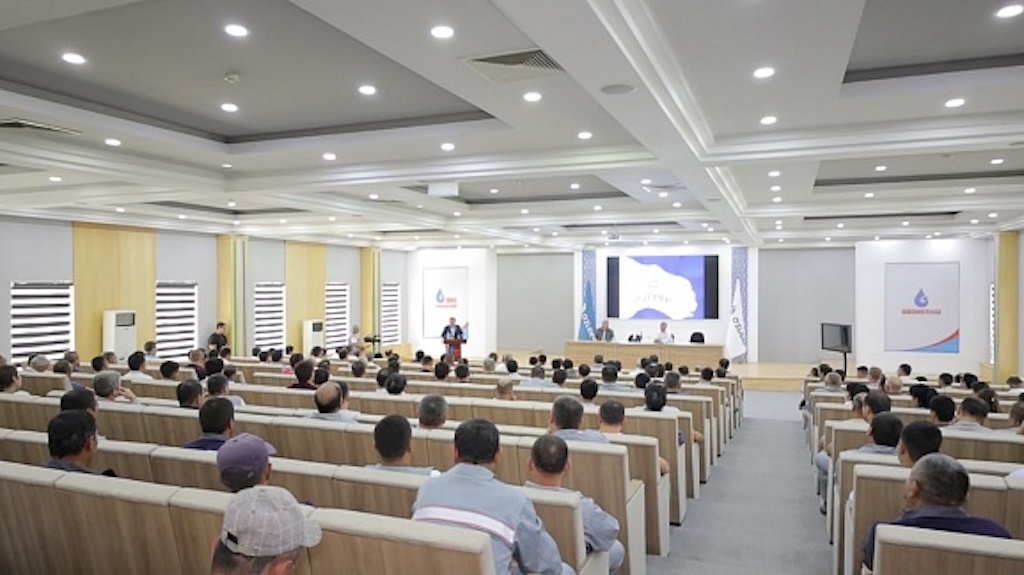 Workers at a gas refining facility in the Kashkadarya region attending a briefing in July about planned changes to the constitution. (Photo: Parliament website)

Uzbekistan has closed the public consultation period for a planned overhaul of the constitution – a process that would have ended in early July but for a bout of unrest in the autonomous republic of Karakalpakstan.

When the draft document was published online on June 25, the public was given a 10-day window to make their own counterproposals. That deadline was extended to August 1 following events in Karakalpakstan.

A government commission on the constitution has said that parliamentary committees will now review the feedback and make changes accordingly.

The proposed, new-look constitution published in June was sold as an effort to make the state more compassionate and democratic. But officials appeared not to have anticipated how much anger would be provoked by one planned provision – crafted without even the semblance of consulting the public – that envisioned the semi-autonomous republic of Karakalpakstan losing its constitutional right to hold a referendum on secession. That privilege, the fruit of a 1993 deal between the Karakalpak government and Tashkent, has never been invoked, but the high-handed manner of its removal nevertheless generated much bitterness.

The extension of the consultation period looks like the Uzbek government’s attempt to show it is now taking a different tack. It remains uncertain, though, just how transparently lawmakers – and the government officials to whom they are ultimately beholden – intend to go about integrating the public feedback into the amended constitution.

Mirziyoyev has not helped matters by adopting contradictory positions in his assessment of events in Karakalpakstan. On one hand, by scrapping the proposed abolition of the referendum privilege, he seemed to acknowledge that the anger of Karakalpaks was justified. At the same time, though, he has talked darkly about the unrest being the work of shadowy “foreign forces” whom he has declined to identify.

According to the latest figures as of August 1, at least 21 people were killed during the violence in Karakalpakstan, which centered on the capital, Nukus. Another 243 people, including 38 law enforcement personnel, were injured, officials have said. More than 500 people were arrested.

In addition to bolstering the presence of security personnel, authorities reacted to the early July turmoil by suspending internet connections across Karakalpakstan. Connections were only restored on July 20, just as a parliamentary inquiry commission was visiting.

Once a final proposed constitution is drawn up, a date for a referendum to approve the document will be appointed.

There is little doubt that the vote will be overwhelmingly favorable. Few of the remaining known amendments are especially contentious. Social media users have reported that the mahalla (neighborhood) committees that the government uses to enforce its writ at a capillary level and private companies have already taken to holding town hall meetings to brief attendees on the virtues of the new constitution.

The one change that some could object to concerns a topic that remains taboo as it concerns a person whom it remains risky to criticize: Mirziyoyev. One set of changes will see presidential terms reset back to seven years.

A senior lawmaker has signaled that this will mean Mirziyoyev can run for the presidency again if he so wishes, even though he is currently serving the second of two permitted five-year terms. Rather than having to step down by November 2026, as is currently the case, Mirziyoyev may get the right to stay in power well into the 2030s or beyond.