Flights will take 30 minutes on a route considerably shorting travel times from the mainland. 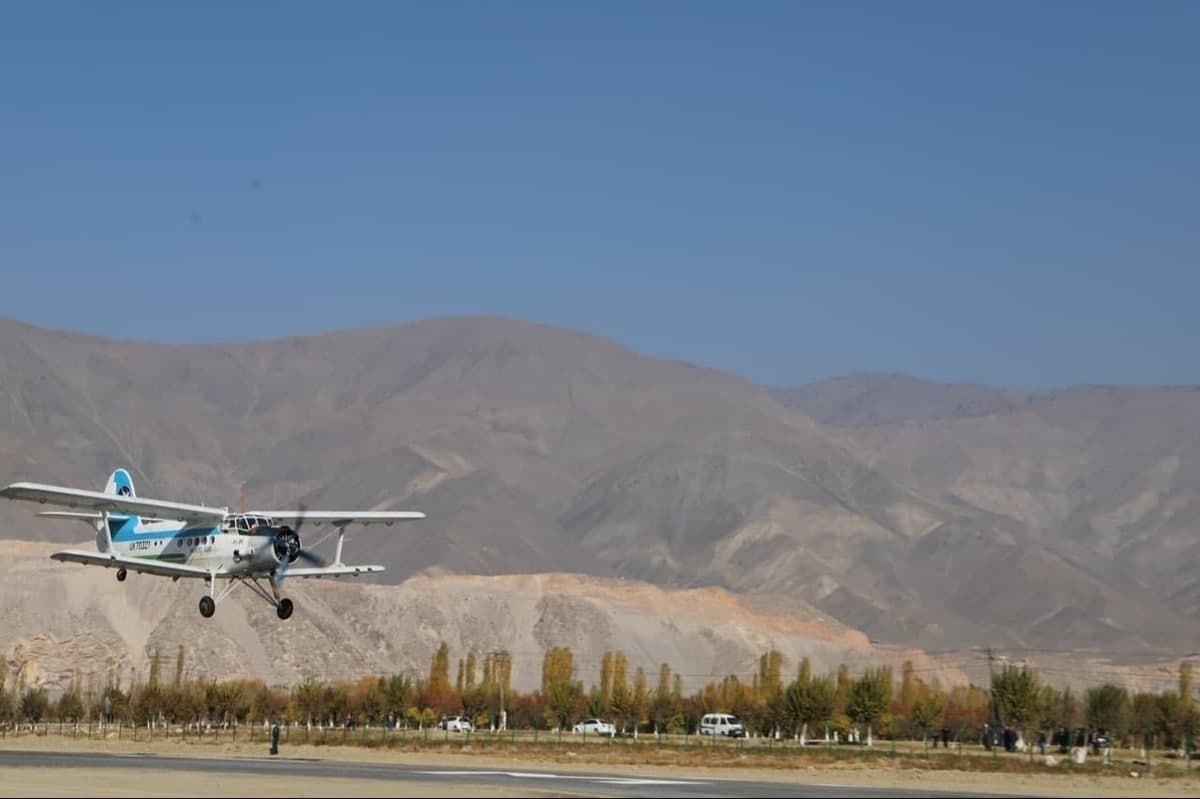 Yes we corn: Passengers on the Sokh flight will travel on An-2 planes. (Photo: Uzbekistan Transportation Ministry)

Regular scheduled flights from the capital of Uzbekistan’s Fergana region to the nearby exclave of Sokh got underway on December 12, providing residents a valuable lifeline out of seclusion.

The Transportation Ministry said in a statement on its Telegram account that state-owned Humo Air will run the service twice weekly. Passengers flying from Fergana to Sokh will travel on An-2 propeller aircraft on trips lasting 30 minutes.

Fares in one direction currently stand at 150,000 Uzbek sum ($14), but the airline’s press service told Eurasianet that prices could possibly be lowered at a later date and that flight frequency may be increased if there is strong demand.

The urgency for this route grew especially acute following events in May 2020, when Sokh inhabitants clashed with residents of a nearby village in Kyrgyzstan, whose territory fully surrounds the exclave, over access to irrigation water.

President Shavkat Mirziyoyev’s government sought to temper frustrations in Sokh by pledging generous investments and job-creating initiatives, as well as the revival of direct transportation links. Anybody wishing to travel to and from the exclave from the Uzbek mainland must under present conditions traverse international borders twice in quick succession, which severely hinders smooth movement and trade. Car voyages from the mainland to the exclave can take up to three hours.

Before the collapse of the Soviet Union, flights used to operate between Sokh and Fergana, using the same type of rickety An-2 planes that will again be used on the route. These are known popularly as “kukuruzniks” after the Russian word for corn, because they were often used for crop-dusting. Those flights ceased in the early 1990s and the Sokh airfield was given to local farmers, who turned it into plots for growing potatoes, tomatoes and corn.

Construction of the new Sokh airport finished in October at a cost of $640,000.

An ancillary effect of this route will be to justify the creation of Humo Air, which was started early last year as an affordable option for domestic travelers.

“The plan is for the company to offer regular flights within the country at rates considerably lower than what is currently available,” Prime Minister Abdulla Aripov announced in January 2020.

The airline has been described as analogous to Kazakhstan’s FlyArystan, which was founded in 2018 at the initiative of then-President Nursultan Nazarbayev. Airports in the cities of Termez and Samarkand have already undergone redevelopments to accommodate Humo Air’s fleet, which comprises 43 An-2 aircraft.