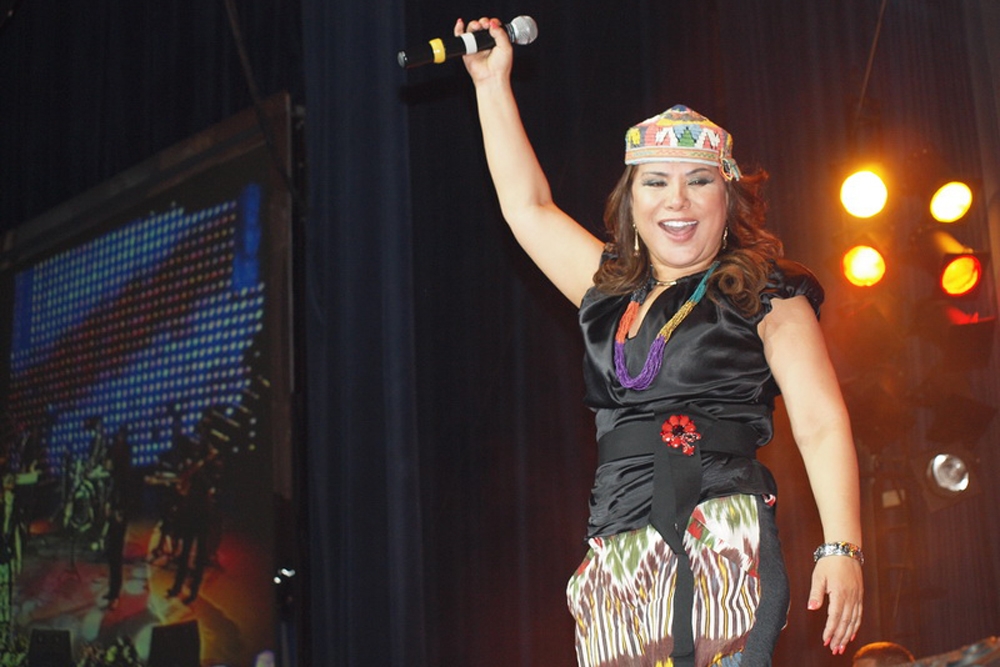 Uzbek pop singer Yulduz Usmanova performs in Russia’s St. Petersburg in 2012. Usmanova has lived abroad since 2008 after being forbidden from performing inside Uzbekistan. In late September 2016, she reportedly received a license from [Uzbekistan’s state-run arts association] Uzbeknavo, which allows her to resume performing in this Central Asian nation. (Photo: Yulduz Usmanova’s official website)

In a possible sign that a cultural thaw is unfolding in Uzbekistan, a few popular and unofficially blacklisted performers could soon return to the country’s screens, stages and airwaves.

Comedian and actor Obid Asomov and pop singer Yulduz Usmanova both fell out of official favor over the years, forcing them to seek their fortunes elsewhere. Usmanova has lived in Turkey since 2008 after being forbidden from performing inside Uzbekistan. No official announcement has been made, but an employee with state television station Tashkent has told EurasiaNet.org that films starring Asomov are to start airing again on domestic broadcasters.

“There was an unspoken order that any films featuring Asomov, or in which he did the dubbing, could go air without censorship,” the source told EuriasNet.org. “In the running order they have included ‘The Giant and the Dwarf’ and ‘Onward Arba,’ both of which star Asomov.”

Asomov has not been seen on Uzbek television, or in any locally made movies, since 2010 – not that this has diminished his massive popularity in the country. More recently, he has appeared in a Russian comedy show “Crooked Mirror,” presented by Yevgeny Petrosyan. The Uzbek comedian’s diminutive height has earned him the nickname “Little Uzbek” in Russia, where he attained success doing a comedy routine as a stereotypical Uzbek migrant.

But the shtick was less amusing to Uzbek officials, who found Asomov’s gags troublesome for their sense of national pride.

In an interview with RFE/RL’s Tajik service, Radio Ozodi, in 2011, Asomov said that he had a run-in with former Uzbek Culture Minister Anvar Jabbarov.

“Jabbarov said to me: ‘You should stop doing your shows on Russian television.’ I was shocked by that statement. It got to the point that he wanted a written statement from me, but I refused. I told him that even if I stopped performing, Russian television would still show my old routines,” Asomov told Radio Ozodi.

The Uzbek pop diva, Usmanova, has likewise spent some time in the professional wilderness. The story of how she fell out of favor dates back to the mid-2000s, when she was invited to perform by the late president of Turkmenistan, Saparmurat Niyazov. At the time, Uzbek President Islam Karimov had strained relations with his Turkmen counterpart. Thus, Usmanova found herself frozen out of live and television performances — again as the result of an unspoken ban.

Initially, Usmanova adopted a defiant line and criticized her country’s authorities for interfering in the arts. “I am an artist, and art needs freedom. What bothers me is this: why do politicians keep interfering in art? I can't comprehend this,” Usmanova, who had previously served as member of parliament, told Voice of America's Uzbek Service in 2008. “As an artist, I need to perform. I left the country because [politicians] did not understand this.”

For years afterward, Usmanova tried to inveigle her way back into the affections of the country’s leadership. In December 2012, she recorded a song titled “Gulisan" (“You Are Blossoming”) for Karimova’s pop-loving eldest daughter, Gulnara. At the end of 2015, she devoted a song called “Padishah” to Karimov. The word refers to one of the popular affectionate nicknames reserved for the late president and is a term for sultans dating back to Ottoman times.

“I wrote a song devoted to our padishah, the father of our nation, who has been running Uzbekistan for many years, protecting peace and concord in the country. I thank him a thousand times,” she told diners before a performance in a swanky Tashkent restaurant in December 2015. A recording of the dedication was filmed and later circulated online.

Not content with that show of sycophancy, Usmanova in June recorded a ballad devoted to the Shanghai Cooperation Organization summit that was to take place in Tashkent later that month. Uzbek authorities undertook major efforts and deployed substantial financial resources to make their hosting of the summit a showcase for the country, so Usmanova’s choice of song topic was not accidental.

It now seems as though the persistence has paid off. In late September, Usmanova received a performing license from the [state-run arts association] Uzbeknavo, and “now all roads are open to her,” music producer Zhavlon Shadiev told EurasiaNet.org.

The return of these and possibly other blacklisted stars is being linked to reinstatement of 55-year-old Abdulla Aripov as deputy prime minister. Aripov became an object of interests for prosecutors in 2012 following allegations he was linked to corruption scandal involving Russian-owned mobile phone service provider MTS. With his political patron, interim President Shavkat Mirziyoyev, now in charge, Aripov has been welcomed back into the halls of power, and is overseeing a number of portfolios, including youth affairs, culture, information technologies and telecommunications.

It may be too early to speculate about a full-on relaxation in the state’s stance toward show business, however.

In May, it was Mirziyoyev personally who led an onslaught against pop singer Abdulaziz Karimov, whom he dubbed a “traitor to the homeland” for adopting Turkish nationality. The performer was stripped of his title “Honored Artist of Uzbekistan” — an honorific carried over from the Soviet Union that grants the holder substantial public status, as well as access to special state benefits.

But what Mirziyoyev takes away, he also gives, according to poet Muhammad Ismail. “Only Mirziyoyev himself could do any of this — no other person could afford to take such decisions,” Ismail wrote on his Facebook page, alluding to the recent reinstatements. “Mirziyoyev respects and loves writers, poets and singers, particularly the singer Sherali Juraev.”

Juraev is perhaps Uzbekistan’s most beloved singer for his evocative renditions of national folk songs. For all that popularity, however, he has been missing from Uzbek television and radio stations since the 1990s, ostensibly because of his unreliable political views.

But Ismail claimed on his Facebook page, citing unnamed government officials, that Juraev was called on September 27 by an aide to Mirziyoyev and told that he would once again be allowed to perform at official sanctioned concerts.