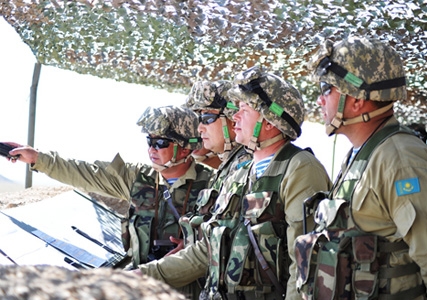 The annual military exercises of the Shanghai Cooperation Organization wrappied up today in northern Tajikistan, with member militaries practicing "air-to-ground fire attack, joint encirclement and suppression, charging into depth for pursuit and annihilation and vertical interception and annihilation" against the usual "terrorist" threat.

Taking part were about 2,000 soldiers and 500 military vehicles and airplanes from Russia, China, Kazakhstan, Kyrgyzstan, and Tajikistan. That's all the SCO countries except Uzbekistan, which -- in keeping with its standard practice -- didn't participate. But Uzbekistan seemed to go a bit further this year, and even forbade Kazakhstan's troops and equipment from transiting through its territory en route to Tajikistan, according to Kazakhstan's defense attache in Tajikistan, Serik Zhumadilov:

Uzbekistan, recall, has also declined to participate in various activities of the Collective Security Treaty Organization, a similar political-military bloc. It's also bowed out of Western-led regional initiatives, like the "Istanbul Process" for Afghanistan. And given that Uzbekistan sees Kazakhstan as a rival, it's maybe not too surprising that they don't want the Kazakhstan military marching through their territory.