Mirziyoyev’s occasional words of encouragement notwithstanding, there is a clear red line that bloggers are advised against crossing. The threshold varies from region to region. 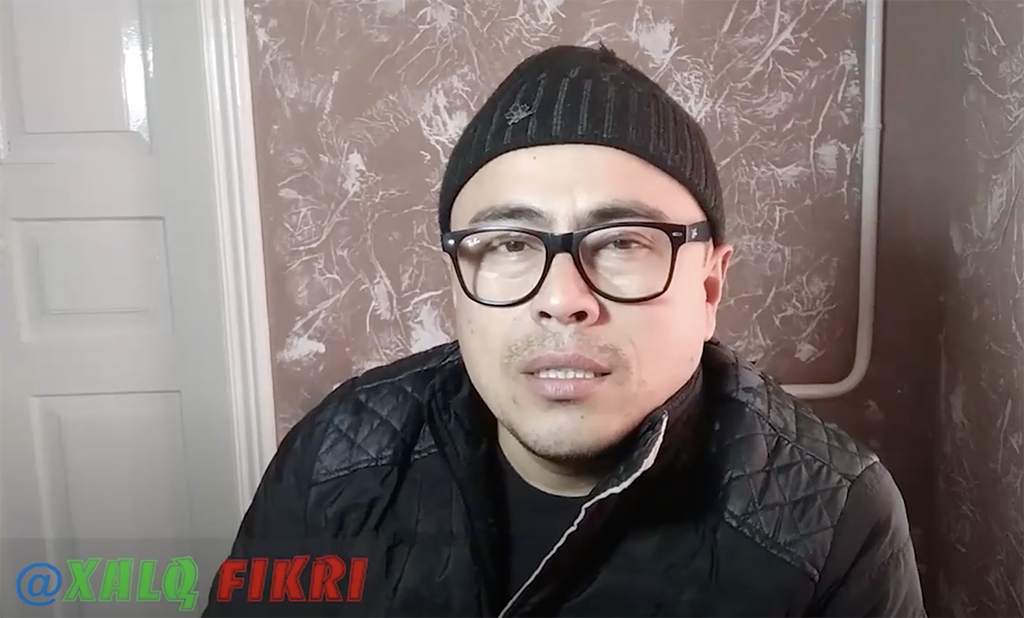 A screenshot of citizen journalist Otabek Sattoriy from his YouTube channel. Sattoriy was arrested on January 30.

The president of Uzbekistan has told journalists “not to be afraid” of reporting frankly about problems afflicting the country.

“The president is behind you,” Shavkat Mirziyoyev said on February 4.

Law enforcement, however, has another message: Careful what you publish or risk facing time in jail.

Only days before Mirziyoyev made his remarks, Otabek Sattoriy, a citizen journalist based in the southern city of Termez, was scooped up in a heavy-handed police operation – a harkening back to the times of Mirziyoyev’s predecessor, the ruthless Islam Karimov.

Surveillance cameras caught the moment Sattoriy was seized outside his home by a large group of plainclothes Interior Ministry personnel and bundled into an unmarked car. Interior Ministry representatives later said the reporter was suspected of fraud and extortion.

“During operational activities, citizen Otabek S. was detained while receiving a Vivo-X50 mobile phone treated with chemicals worth 5 million sum (about $500) from citizen Lochin T.,” police said in a statement, alluding to an apparent operation to supposedly ensnare Sattoriy.

Sattoriy’s relatives say the phone was not payment for any service rendered, but a replacement for a phone that had been smashed while he was out on a filming assignment.

The Interior Ministry has warned citizens not to “disseminate unconfirmed information” about the situation.

“We remind citizens that there is an article in the criminal and administrative code envisioned for spreading false information,” it said.

Sattoriy has established himself as something of a thorn in the side of authorities in the Surkhandarya region. His YouTube channel, Khalq Fikri (People’s Opinion), focuses on matters like gas and electricity shortages, the demolition of people’s homes and unpaved roads.

One measure of Sattoriy’s success as a gadfly is that he has been called out in person by the regional governor, Tura Bobolov, as a recurring object of criticism.

In one typical Sattoriy video, uploaded in November, the reporter goes on a tour of a local market in Termez, using his shakily held camera to document how staples like meat, oil and eggs are not available at the low prices promised by the government. Under price tags showing the cost of items like meat, there are just empty stands.

“We only get promises. But in reality, you can see that nothing is being done,” Sattoriy says.

Unsurprisingly, Sattoriy’s family dismiss the fraud accusations and suggest instead that it is his brand of bread-and-butter issues citizen reporting that has landed him in trouble. His sister, Sitora, told Eurasianet that on January 30, one day after her brother’s arrest, police searched his home for around two hours and took away a computer, five memory sticks, a hard drive, two processors and even four coats.

Investigators have now turned their attention on another citizen journalist, Farkhod Ismailov, whose home has also been searched. Sattoriy and Ismailov are facing suspicions they colluded to form a joint criminal enterprise.

Sattoriy is one of a burgeoning nationwide community of what are known somewhat misleadingly as “bloggers.” That title extends to citizen journalists relying on only their Facebook or Telegram accounts to disseminate content ranging from first-hand testimonies, traditional reporting or opinion pieces. Others favor video reports, like Sattoriy.

Another blogger based in Surkhandarya who spoke to Eurasianet on condition of anonymity said that the move against Sattoriy is an attempt by the regional government to silence him.

“The common people support Sattoriy. They call him ‘the people’s controller,’ because he produces reports directly in the bazaars. And the bazaar in Uzbekistan is a mirror image of the government’s policies in action,” the blogger said.

Another fellow citizen journalist, Abdufatto Nuritdinov from Andijan, said he believes that Sattoriy’s arrest could not have happened without the say-so of the Surkhandarya governor.

“These actions of the authorities are undermining the image of our country. This is going to become a subject of discussion at the international level. People will stop trusting the authorities,” Nuritdinov told Eurasianet.

Nuritdinov speaks from experience. In December 2019, he was sentenced to 15 days behind bars and fined $700 on charges of “petty hooliganism, slander and insult.” RFE/RL’s Uzbek service, Radio Ozodlik, at the time described his content on Facebook as consisting mostly of reports of alleged corruption and petty theft by local officials.

Mirziyoyev’s occasional words of encouragement notwithstanding, there is a clear red line that bloggers are advised against crossing. The threshold varies from region to region.

A citizen journalist in the exclave of Sokh who publishes content under the name Dadahon Khaydarov was detained in August 2020 on suspicion of involvement in a public show of discontent by residents that followed a border dispute with Kyrgyzstan. People in Sokh had long complained of being neglected by officials in Tashkent. The blogger was sentenced to 10 days in jail, ostensibly over his reporting. At the time, his father said that law enforcement officers had thrown a bag over Dadahon Khaydarov’s head and forcibly taken him to the regional capital, Ferghana.

Dadahon Khaydarov had, among other things, called for the dismissal of the then-Ferghana regional governor Shukhrat Ganiyev, a figure known across Uzbekistan for his unrelentingly iron-fisted style of rule.

As it happens, Mirziyoyev spoke in glowing terms about Ganiyev, who was moved to his current job as deputy prime minister in September, while visiting Ferghana on February 5.

“He is an honest and upstanding person,” Mirziyoyev said, one day after encouraging reporters to do more truth-telling. “In difficult days for the people of Ferghana, he did quite a lot of work and showed his mettle.”

In an unusual development, at least one MP, Rasul Kusherbayev, has come out in defense of Sattoriy. In a Telegram post, he commented positively on Sattoriy’s activist reports and appeared to dismiss the charges against him.

“This is an uprising of Surkhandarya officials against freedom of speech and the president’s policy of openness,” Kusherbayev said. “If we remain silent now, then tomorrow, every one of us can be accused of fraud just for criticizing.”