Ollashukurova said she feared being placed in psychiatric institution. 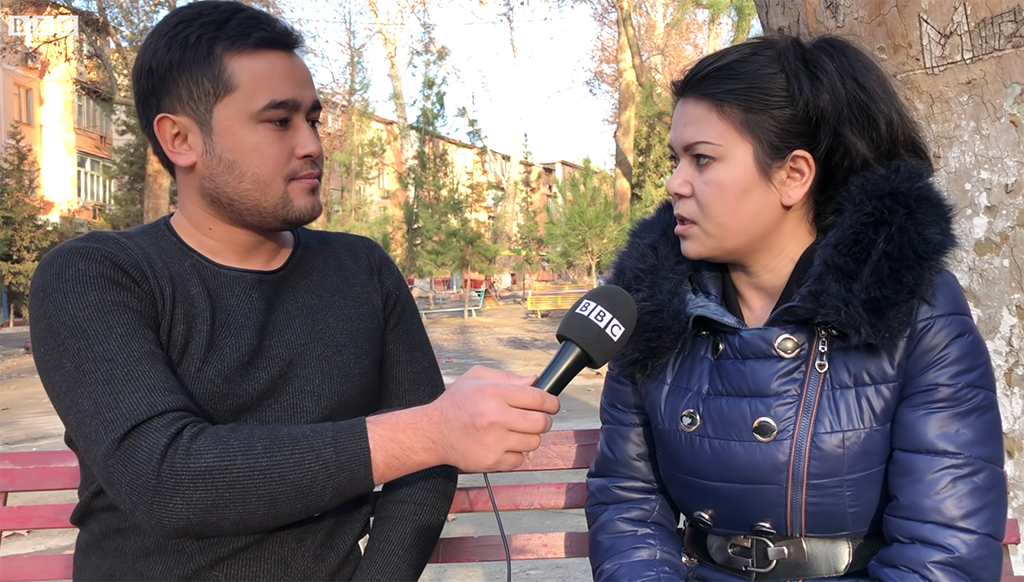 Ollashukurova speaking to the BBC.

A blogger in Uzbekistan who was last year confined to a psychiatric institution following her publication of critical online reports has left the country for Ukraine following what she described as persistent harassment from the authorities.

Nafosat Ollashukurova announced her plans one day before President Shavkat Mirziyoyev on January 20 expressed his support for the media, hailing their focus on problem areas in Uzbekistan.

Ollashukurova, a 32-year-old teacher and mother of two from the city of Urgench, came to prominence in September when she transmitted live Facebook broadcasts of a cross-country trek by poet and journalist Mahmud Rajabov, who had embarked on the walk to draw the attention of the interior minister to his ongoing criminal case.

Rajabov had been facing prosecution for importing books written by longtime political exile Muhammad Solih, head of the banned Erk political party. He was later given a suspended sentence.

On September 23, Ollashukurova was arrested and placed in a pre-trial detention facility for a 10-day period. While confined to an isolation cell, she went on a hunger strike, prompting jail officials to move her to a psychiatric clinic in Urgench.

A spokesman for the Supreme Court in November said that a clinic in the Khorezm region had diagnosed her as being in a psychopathy-like state of paranoia and had recommended she be given treatment. Meanwhile, Levon Ambartsumov, chief psychiatrist at the Health Ministry, suggested that Ollashukurova’s mental state had been induced by a period of intense stress.

The New York-based Committee to Protect Journalists condemned what it described as the “use of totalitarian practices like forced confinement of journalists in a psychiatric ward.”

Although Mirziyoyev came to power in 2016 amid promises of reform, the Soviet-vintage method of locking dissidents in psychiatric institutions has not altogether disappeared. Veteran rights activist Elena Urlayeva was placed in one such facility for a period in March 2017.

Ollashukurova was eventually released on December 28, after which she moved to Tashkent. On January 10, Ollashukurova gave an interview to the BBC Uzbek service in which she voiced her concerns that the authorities could once more resort to placing her in a psychiatric institution.

In a post on Facebook on January 19, Ollashukurova said that she decided to leave for Ukraine, where she intends to apply for political asylum, after receiving a visit at her Tashkent apartment from Ambartsumov, the Health Ministry psychiatrist.

“But I was not home. If they had taken me away to the psychiatric clinic, I would never have got out of there,” she wrote.

Abdurakhmon Tashanov, a rights activist who accompanied Ollashukurova to the airport in Tashkent, along with a representative of the U.S. Embassy, shared that assessment.

“They wanted to diagnose [her] as being mentally ill and to say that she required hospitalization. With a verdict like that, they would have needed no decision from the courts,” he told Eurasianet.

Ollashukurova wrote that she is embittered by Mirziyoyev’s failure to live up to his pledges to defend the interests of independent local journalists and rights activists.

“When they put me in a psychiatric institution over the Mahmud Rajabov case, I lost all my trust in the policies of [Shavkat] Mirzoyoyev,” she wrote.

Mirziyoyev on January 20 addressed the role of the media in the inaugural session of parliament following the elections that took place in December and earlier this month to thank reporters for their work.

“My thanks go out to local and foreign media. They very actively participated in the election process. You saw what acute and problematic issues journalists brought up with party representatives during the debates,” he said.