A draft bill envision fines for officials using languages other than Uzbek in office work. 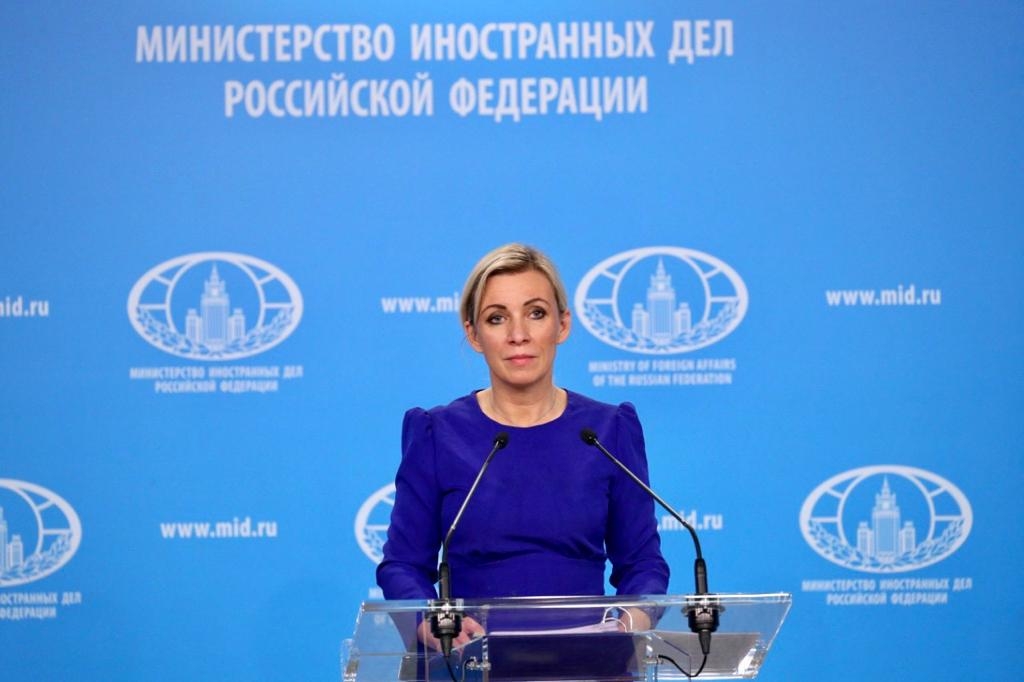 How Do You Solve a Problem Like Maria?: Zakharova addressing reporters at a press event. (Photo: Russian Foreign Ministry)

Uzbekistan has admonished a spokeswoman for Russia’s Foreign Ministry who last week complained that a draft bill envisioning fines for civil servants failing to produce official documentation exclusively in Uzbek might prove prejudicial to minority communities.

The Uzbek Foreign Ministry said in a statement on May 18 that it was inappropriate for foreign officials to interfere in internal Uzbek affairs, such as the “regulation of the state language.”

The note of protest was an undisguised retort to comments made by Russian Foreign Ministry spokeswoman Maria Zakharova, who said on May 14 that preserving the use of Russian in official business in Uzbekistan would be in keeping with “the spirit of the history and current quality of our relations.” Zakharova also lamented that the decline of Russian might stand to adversely affect the interests of Uzbeks wishing to study and work in Russia.

“It seems so far that supporters [of the bill] are in the minority,” she said.

The Uzbek Foreign Ministry does not specifically name Zakharova or Russia in its retort, but it is clear that she was the intended target of the statement.

This exchange of views highlights the often-heightened sensitivities surrounding language issues. The proposed fines add further force to a law from 1995 that requires that official documents be adopted and published in Uzbek. That legislation specifically envisioned the parallel use of other languages – clearly implying Russian – in legal, scientific and official contexts, but the new bill seems to be more exclusionary in its intent.

Doing office work in languages other than Uzbek would, if the draft bill under consideration were adopted, incur fines up to $110.

When the draft bill was published, it drew lively online discussion, in part from government officials alarmed that they might risk losing their job because of less-than-perfect Uzbek language skills. The constituency of citizens unable to speak and, more importantly in this context, write freely in Uzbek – this typically tends to comprise ethnic Slavs or members of other minority groups, but also includes a robust number of Uzbeks more comfortable with Russian – have also registered anxieties that they are being marginalized.

Analogous efforts to promote the local language at the expense of Russian in countries like Ukraine and in the Baltic states has in recent years enraged the Kremlin. It was ostensibly the post-Maidan Ukrainian government’s moves in that direction that served as partial justification for Russia’s annexation of Crimea, where Russian eventually assumed prevailing language status.

Tashkent is evidently wary of entering into too direct a confrontation with Moscow, however, a fact attested to by its four-day delay in responding to Zakharova’s remarks, which were widely reported in local media.

Lawmakers were less circumspect. Akmal Burkhanov, a member of parliament and the head of a pro-government, would-be grassroots movement called Yuksalish, said that the proposed bill would not have any bearing on bilateral relations.

“On what basis did Zakharova come to the conclusion that the supporters of this bill are a minority?” Burkhanov was reported as writing on his Telegram channel. And “what right does an official representative of the Russian Foreign Ministry have to ponder whether or not this contradicts the interests of citizens of Uzbekistan?”

While asserting the right for Uzbekistan to determine regulation of the use of the state language in official contexts, the Foreign Ministry stressed that it otherwise upheld the unhindered use of other languages in society.

“There are no grounds for concern regarding the situation of other [minority] ethnic groups living in Uzbekistan,” the ministry said.

Bahrom Ismailov, a founder member of Buyuk Kelajak (Great Future), a nongovernmental group that casts itself as an aiding force in implementing ongoing government reforms, told Eurasianet that he agreed with Zakharova when she said that preserving Russian would be in the interests of many Uzbek citizens.

“For almost 100 years, the Russian language has been actively used in all areas of Uzbek life. And today, Russia is a number one trading partner and labor market for Uzbekistan. Maintaining a decent level of knowledge of Russian among the population is not a political whim of Maria Zakharova, but an objective requirement,” Ismailov said.

Some would go even further than that. Last April, a group of self-styled representatives of the Uzbek intelligentsia, even advanced a proposal to restore the status of Russian as one of Uzbekistan’s state languages.

“The number of schools where Russian is used as the language of instruction has halved,” the backers of that proposal wrote in a collective appeal. “If this carries on, there is a danger that in the coming decades, the Russian language will cease to have any practical significance for the population, other than for those living in urban areas. That cannot be allowed.”