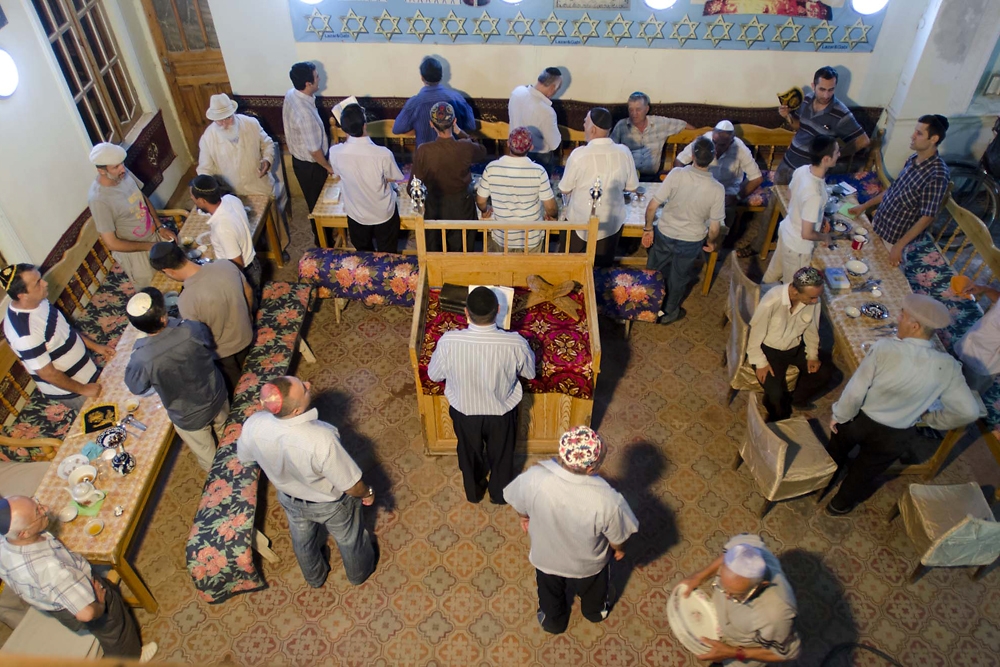 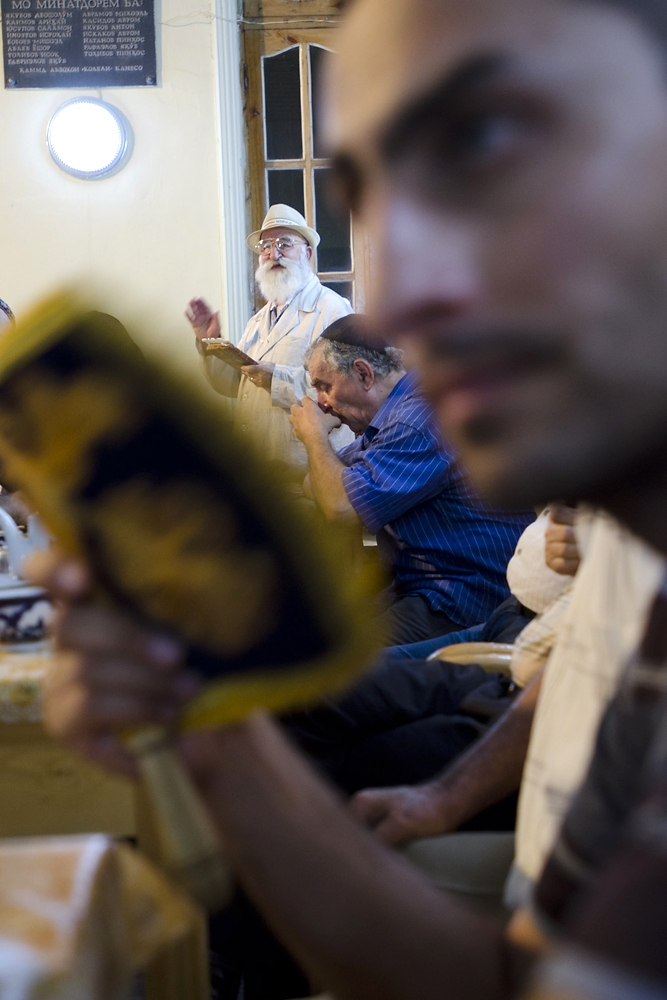 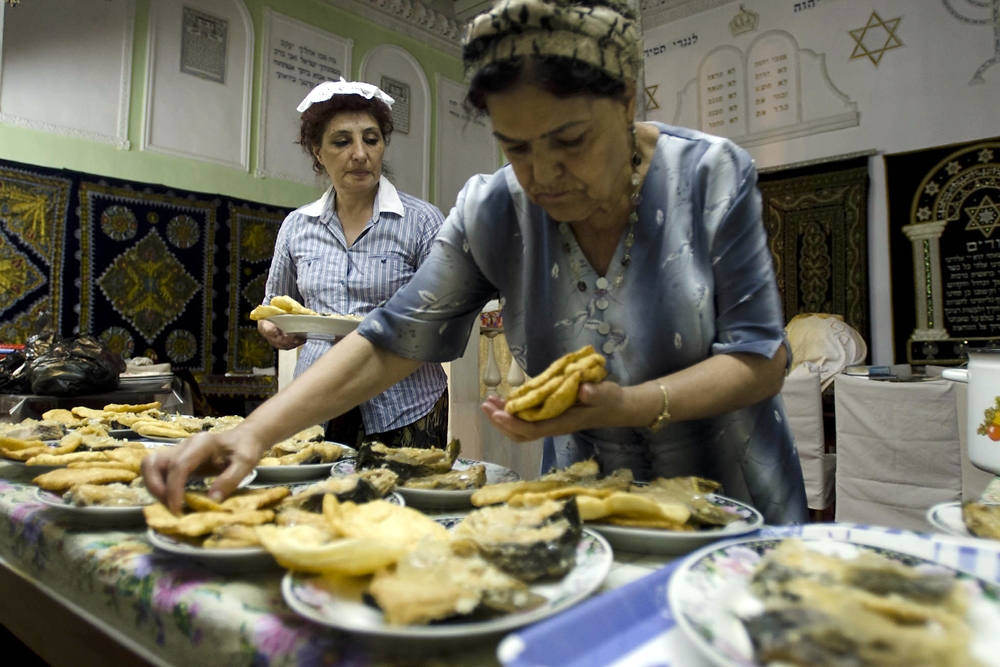 Women prepare plates of fried fish and bread during the dinner for Yuri's deceased mother. 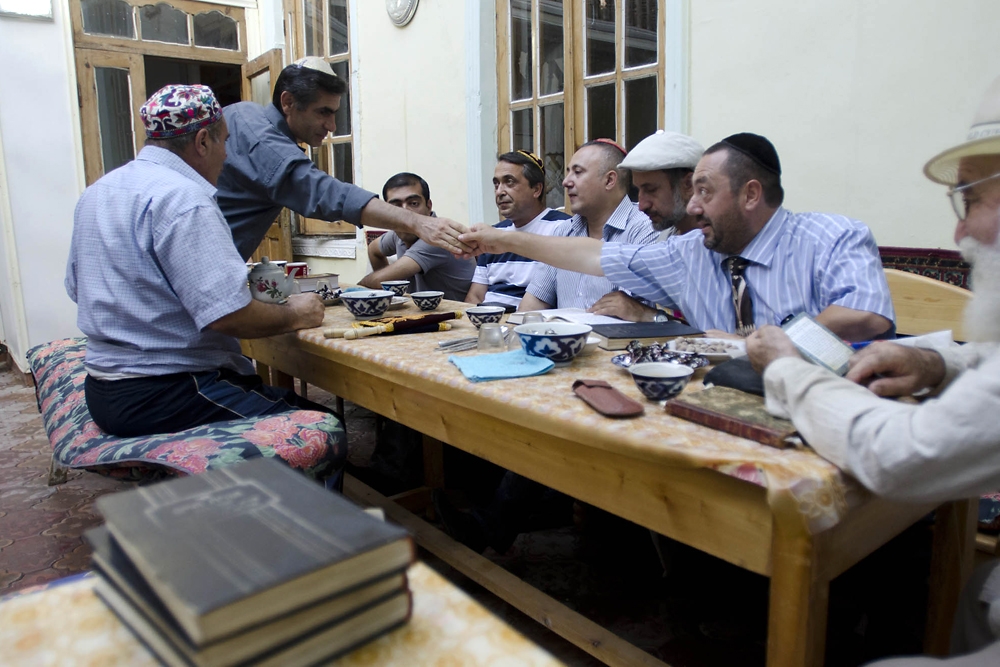 Men greet each other during the memorial dinner, known as a yahrzeit. 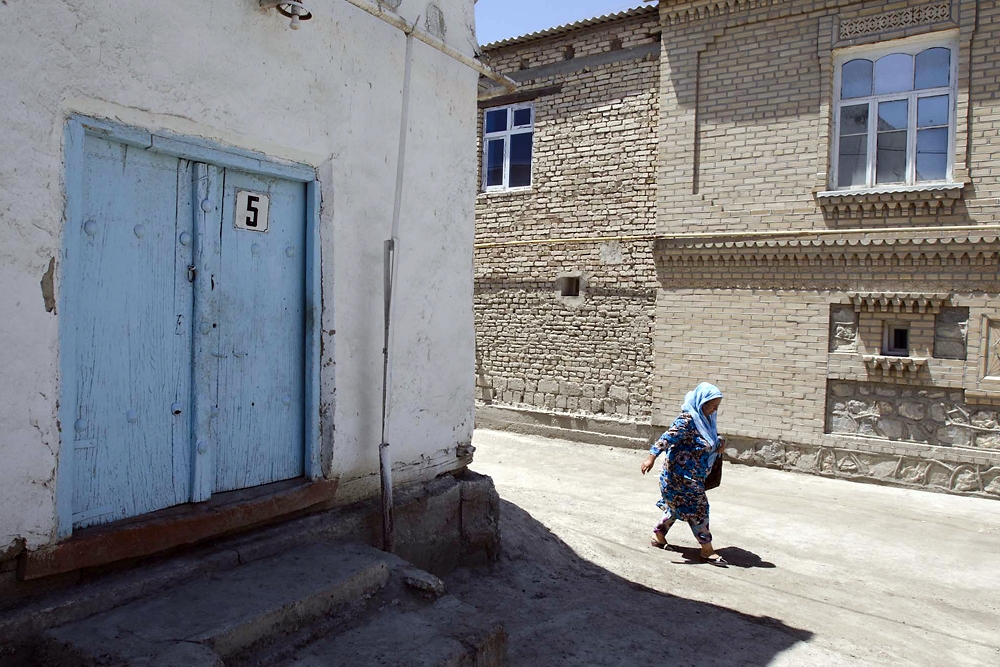 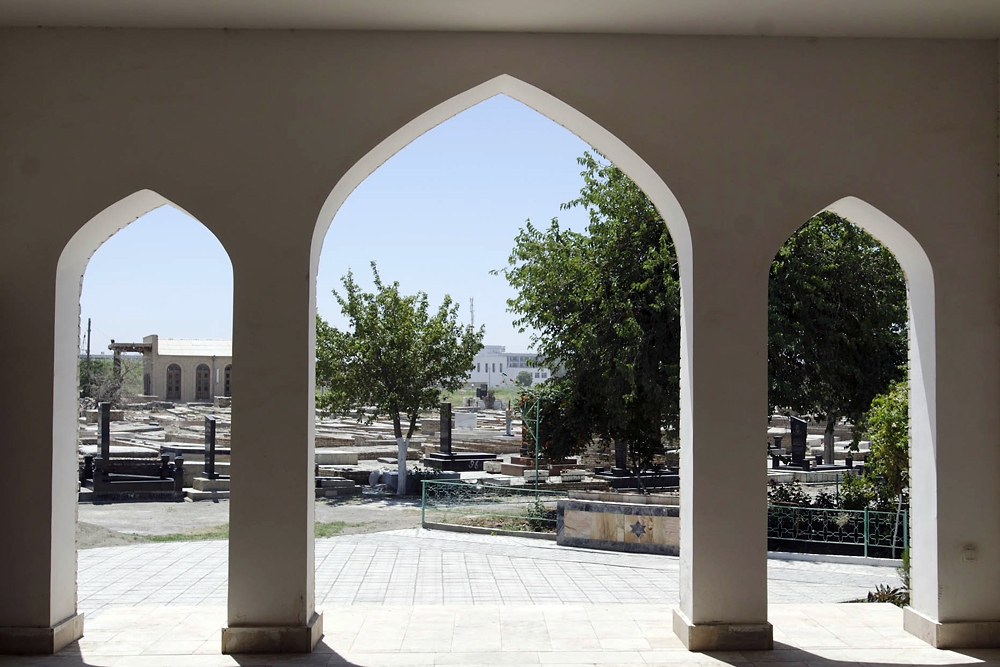 The three-arched entryway opens to the Jewish cemetery on the edge of Bukhara's old town. 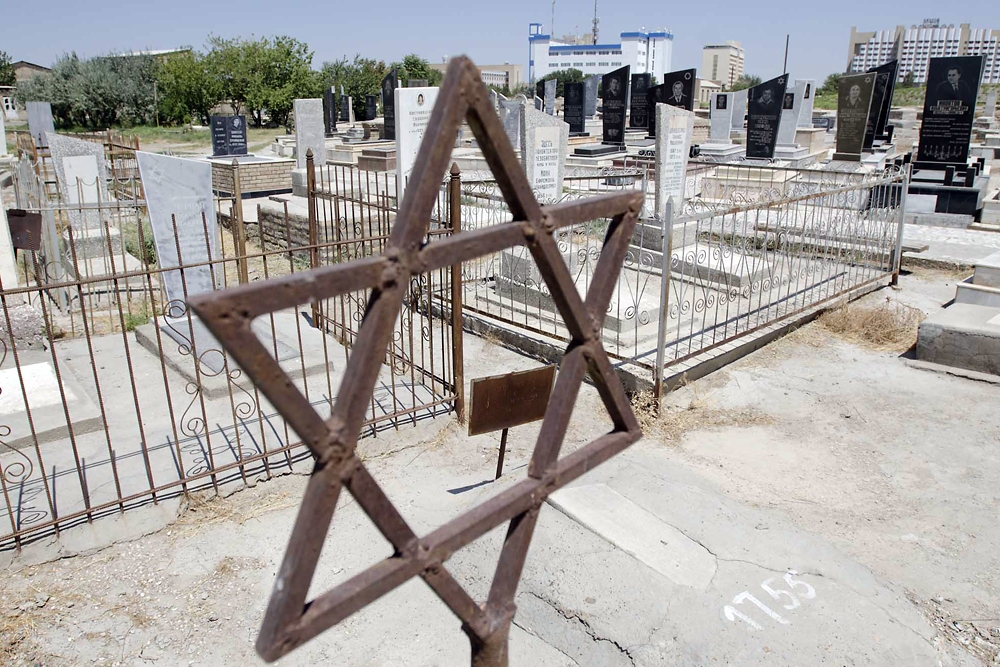 More than 10,000 graves make up the Jewish cemetery, which is maintained primarily through remittances from abroad. 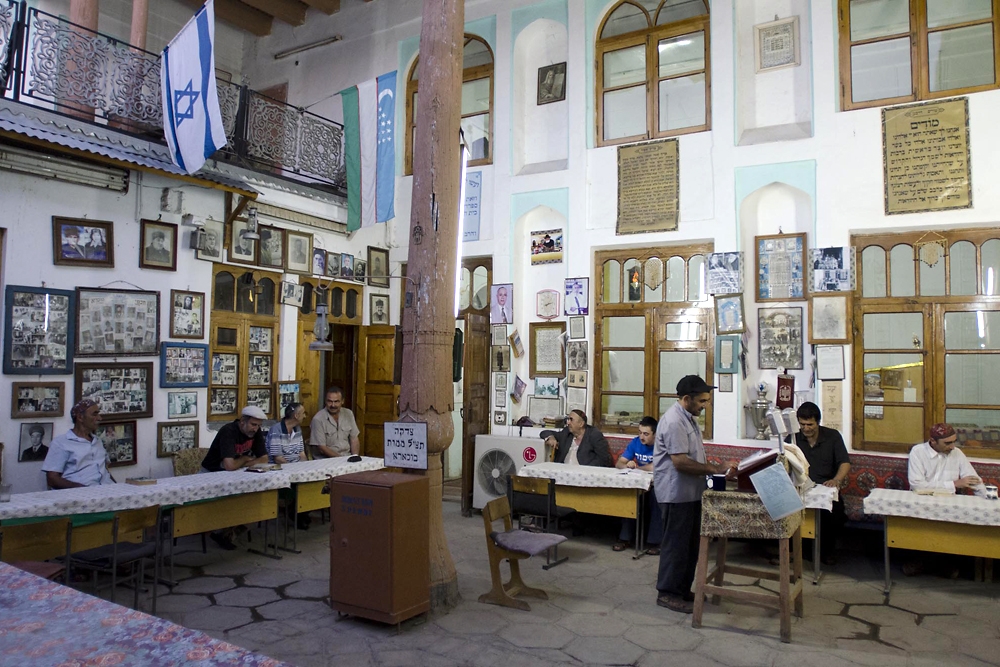 About a dozen men attend a mid-week evening service at the Yahudiylar Machiti Synagogue in Bukhara. 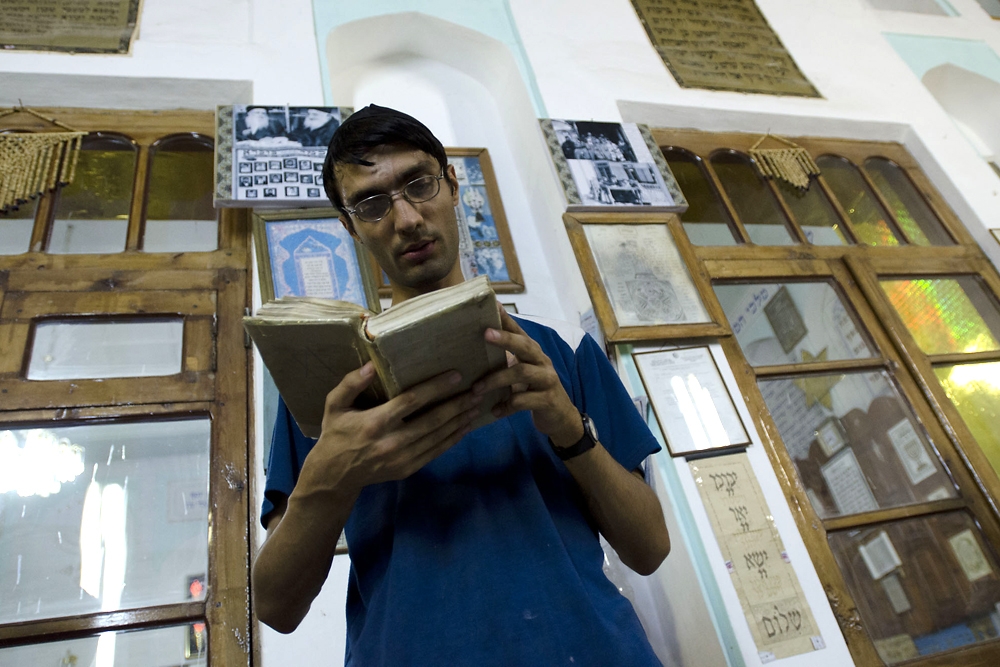 Reading from the Torah, Gavriel Borokhov says he will move with his family to New York City. 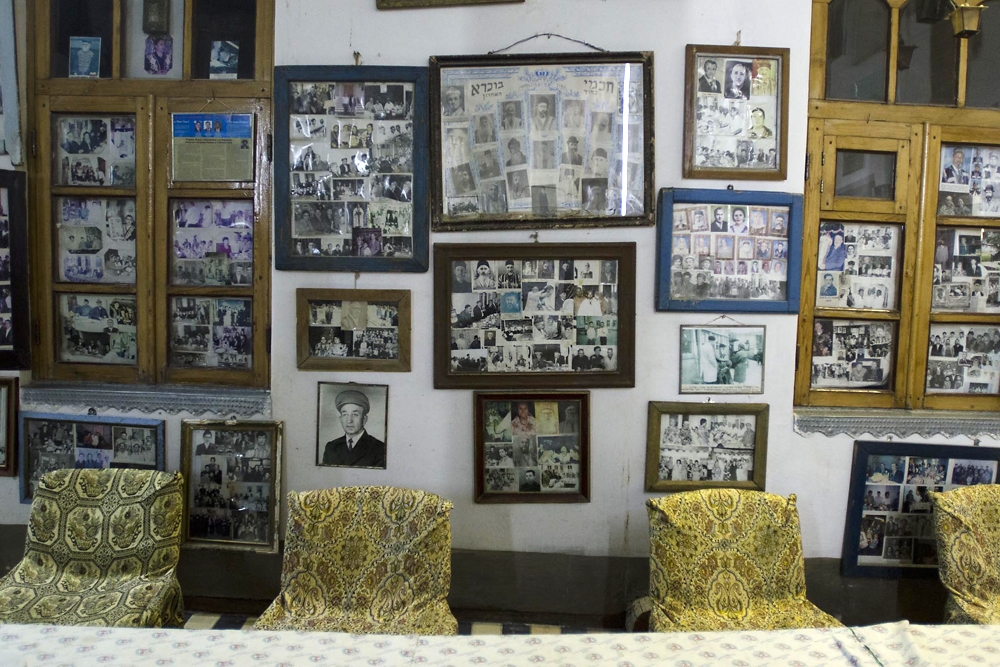 Hundreds of framed photos tracing the 20th Century history of the Bukharan Jews decorate a wall in the synagogue. 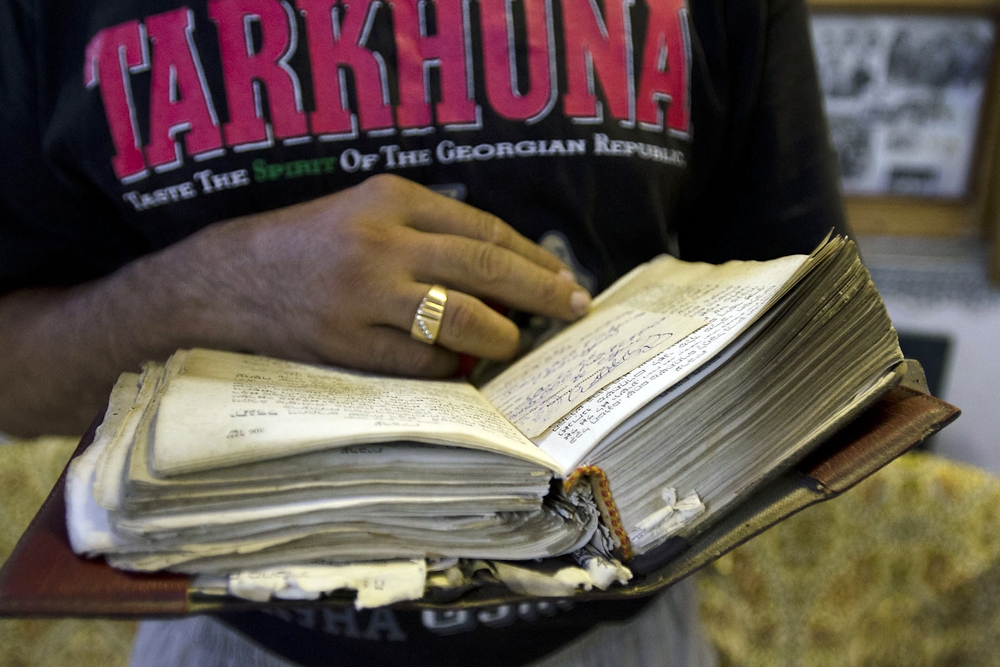 A member of Bukhara's congregation reads from a well-worn Torah. 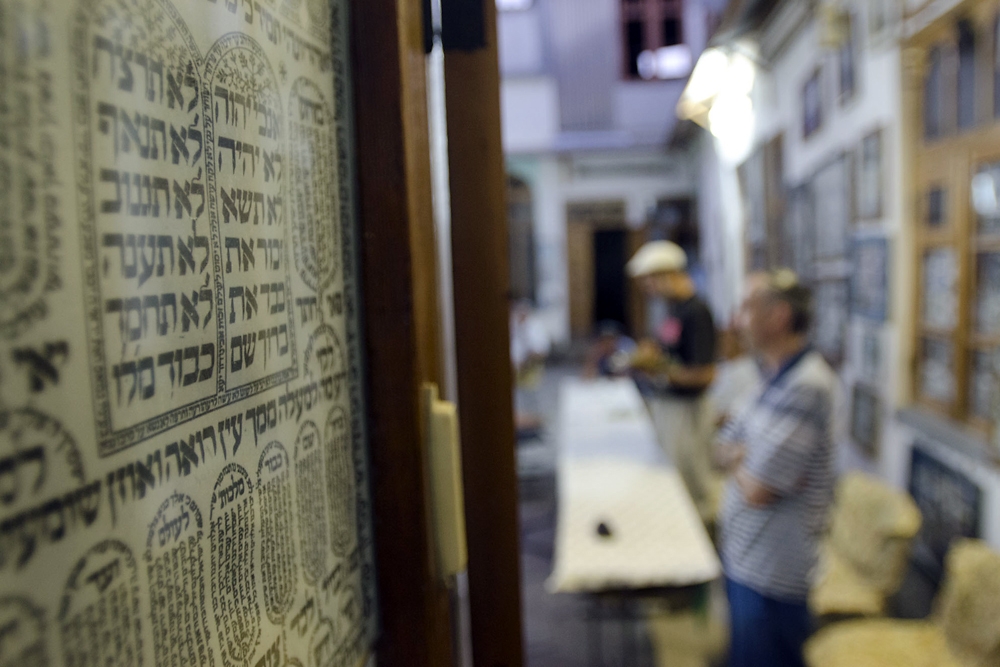 Written in Hebrew, the 10 Commandments hang on the wall of the Yahudiylar Machiti Synagogue. 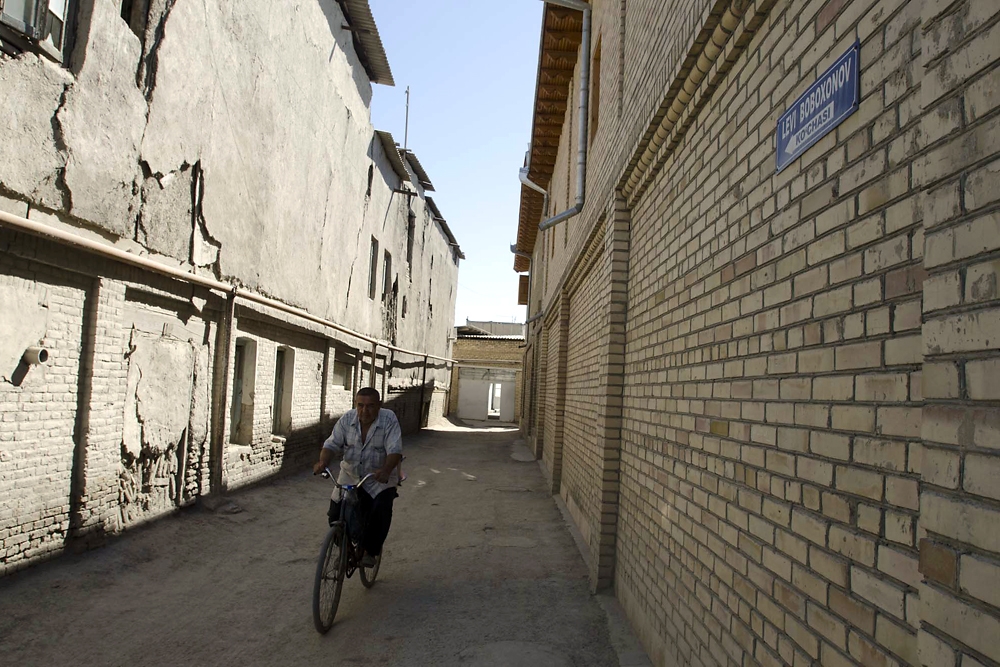 An alley in Bukhara's old town is named after Levi Babakhan, the legendary court vocalist of the last emir of Bukhara. 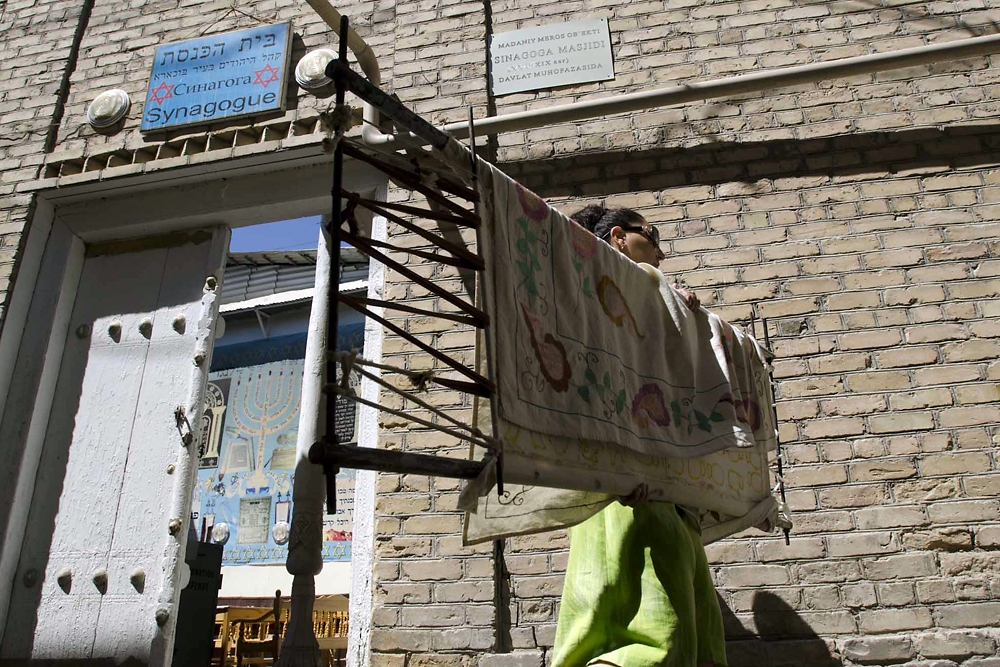 An Uzbek woman walks past the Masjidi Synagogue carrying an unfinished suzani - a traditional hand-embroidered textile. 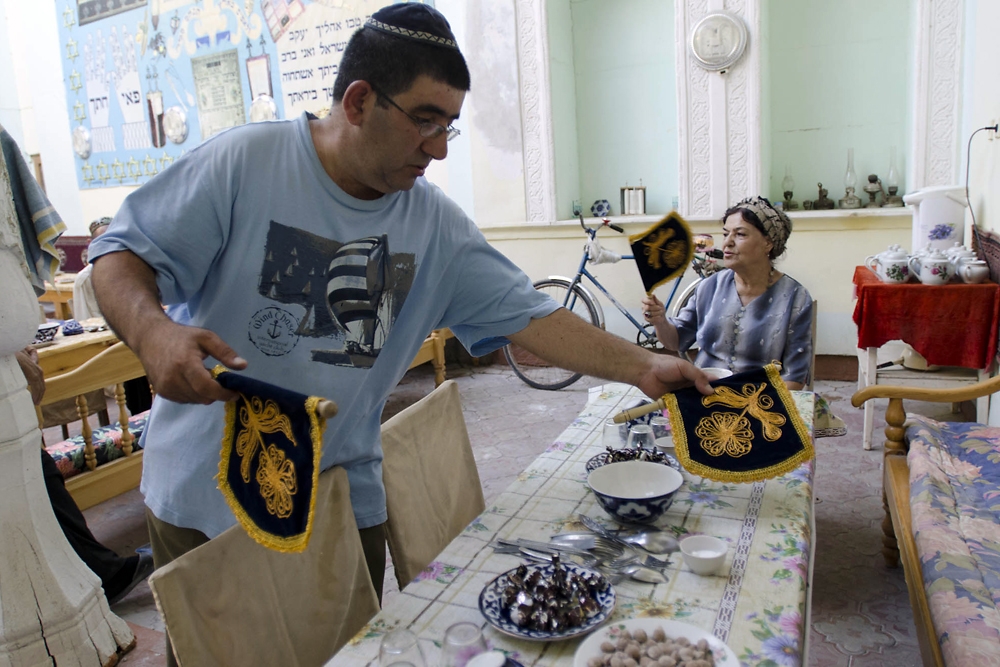 A Jew from Bukhara lays out spinning fans for attendees of the yahrzeit dinner. 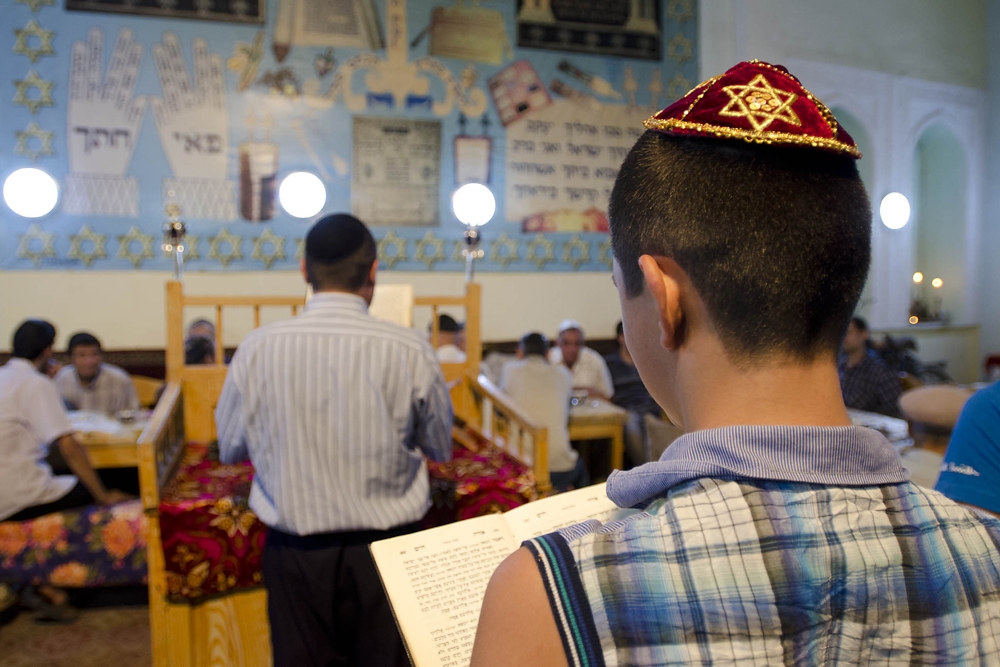 Eleven-year-old Iosef Olnatanov reads along from his Torah during the ceremony. 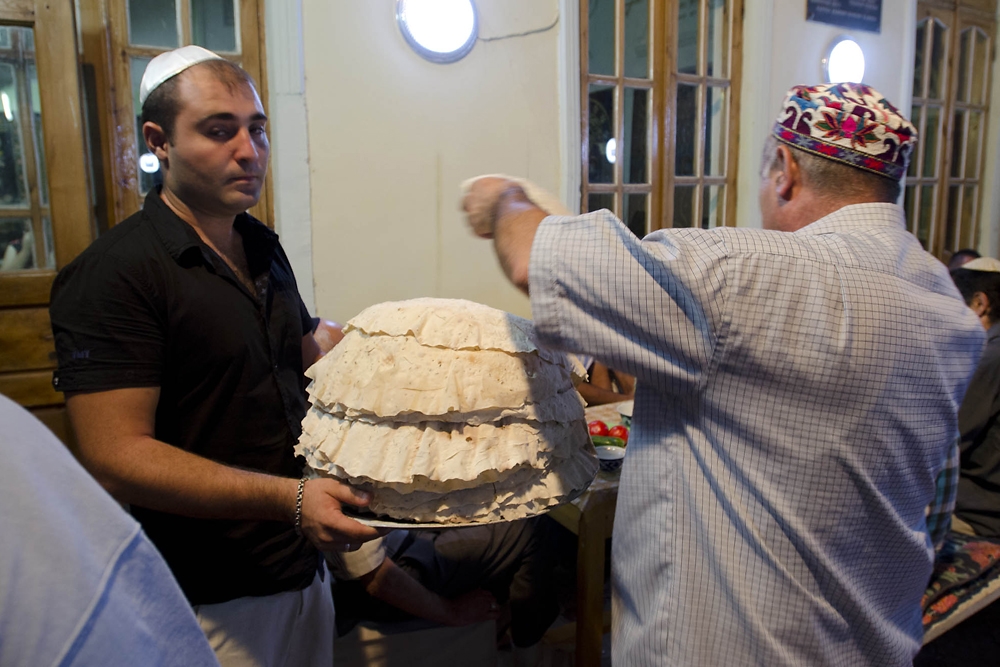 Flat unleavened bread is served at the end of the evening with dinner of fresh vegetables, fish, tea, and sweets. 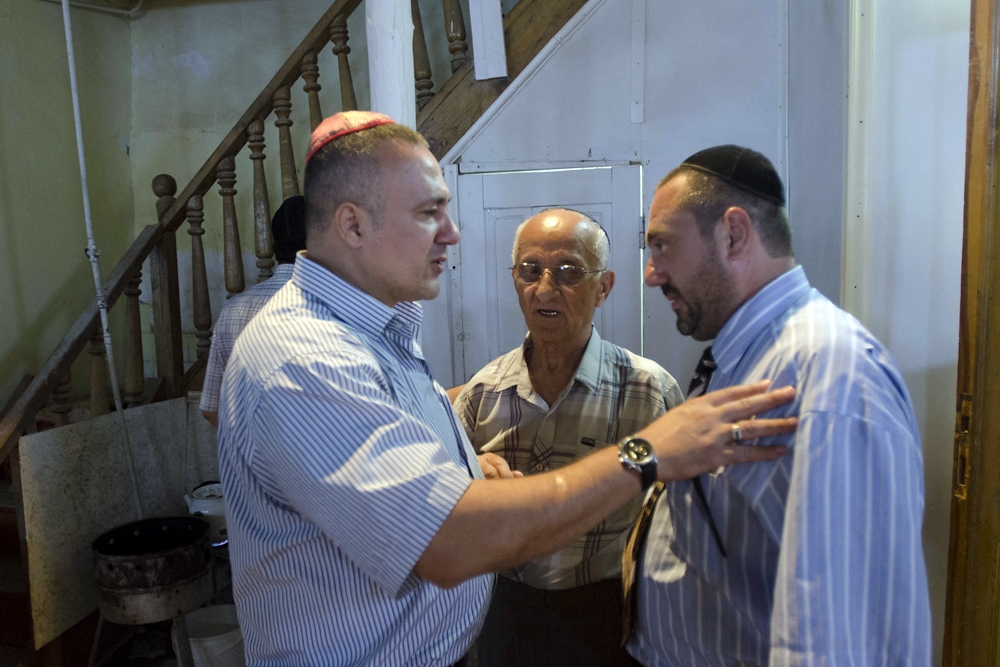 Yuri (center), who held the ceremony in honor of his mother, listens to two men who still live in Uzbekistan. 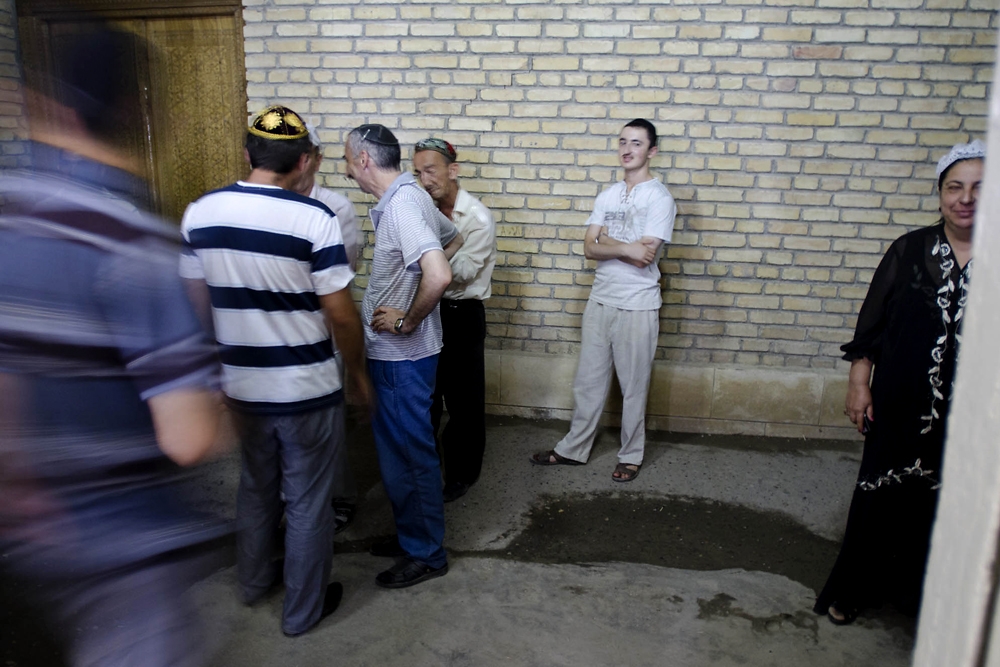 Jews leave the Masjidi Synagogue late in the evening.
prev
next

As the temperature in the shade finally dipped below 40 degrees Celsius, a deliveryman carried a two-foot-high stack of  flatbread into the 17th-Century Masjidi Synagogue in Bukhara’s old city. Women and young boys followed with five-liter jugs of water and plastic bags filled with bright green cucumbers, softball-sized tomatoes, salt-roasted hazelnuts, and enough sweets to overwhelm a kindergarten classroom.

Down the narrow, winding and dusty alleys in the center of Bukhara, a UNESCO World Heritage site, a religious gathering of one of Judaism’s oldest sects was taking place under a cloudless sky.

Yuri, who asked that his last name not be published, had returned from Queens, New York, to his homeland to hold an annual dinner in honor of his deceased mother. The balding septuagenarian took a seat at one end of a 20-foot-long table. At the other end sat Rabbi Aaron Siyanov, the leader of a rapidly dwindling congregation.

Yuri is one of the tens of thousands of Bukharan Jews who have emigrated in recent decades, especially after the Soviet collapse in 1991. Emmanuel Elinatanov, the director of the sprawling, centuries-old Jewish cemetery in Bukhara, said in 1975 about 25,000 Bukharan Jews lived in the one- and two-story mud brick buildings found in the city’s old town. Most packed up and departed for Israel and the United States, in particular New York’s borough of Queens, Elinatanov added.

Back at the synagogue during the ceremony in honor of Yuri’s mother, Rabbi Siyanov read from a Torah, reciting prayers in Russian, Tajik and Hebrew. Heads bobbed as other attendees -- roughly 30 men, five women, and one 11-year-old boy -- read along and fanned themselves to fight off the dry evening heat.

In a small side room lined with books, religious paraphernalia and several Torahs said to be 500 years old, two women prepared plates of vegetables, fish, and bread. Black tea was served after the prayers ended. Middle-aged and retired men reminisced about those who had left Bukhara, and speculated about what would happen to the community that now consists of about 135 individuals.

On the opposite side of the open-air courtyard, men in their early 20s commiserated over the lack of things to do, the lack of work, and the lack of eligible young women as potential wives.

That occasion occurred last summer, but the situation hasn’t changed since then.

This close-knit community of Bukharan Jews traces its history back 2,500 years to their expulsion from Jerusalem. They wandered, first settling in Babylon and then moving to present-day Iran before finally settling around 2,000 years ago along various paths of the Silk Road threading through Central Asia.

Few Jews still living in Bukhara today are optimistic the community can survive another few decades. Gavriel Borokhov, a 23-year-old computer teacher who dreams of becoming an opera singer in the United States, has taught himself English as his family prepares to move to New York in “the next few years.” In English sprinkled with American idioms, Borokhov talked about his married sister already living in Queens and how his father, mother and younger brother have been planning their departure from Bukhara and leaving a 2,000-year-old Jewish history behind them.

“After 10 years, maybe there will be no more Bukharan Jews,” Borokhov said. “It’s finished. Jewish history will be finished in Bukhara.”

While he acknowledged that his mother and father have strong ties to Bukhara and may find it hard to adapt to a new home abroad, Borokhov’s eyes lit up when he pondered a new life half a world away. To show his excitement he stood and sung an Italian opera song with almost incredible perfection, the vibrato of his voice rising into the sky over Bukhara.

“I can’t speak Italian,” he says. “But I learned it myself.”