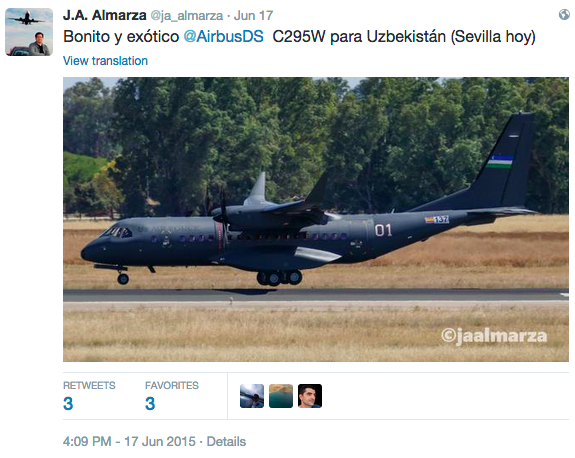 Uzbekistan appears to have bought four military transport aircraft from Airbus, as it continues to try to get new military equipment from Western partners.

Neither Uzbekistan nor Airbus have confirmed the sale, but the news appears to have been broken by a Spanish aviation photographer, J.A. Almarza, who captured images of the aircraft in Spain with the Uzbekistan flag painted on the tail.

Earlier, Airbus announced that it had sold eight C295W aircraft to customers who did not want to be identified. Last week, Saudi Arabia announced that it was buying four of those. The publication of the Spanish photographs seems to solve the rest of the puzzle. "Photographs recently published on the internet by aviation enthusiasts show a C295W at Seville in the markings of the Uzbekistan Air Force, indicating this will be the recipient of the other four," reported IHS Jane's Defence Weekly.

The leading Russian defense blog, BMPD, came to the same conclusion: "The June 17 appaearance of the first photographs of the C295W in the colors of the Uzbekistan Air Force leads to the conclusion that the purchaser of the other four aircraft is Uzbekistan."

A spokesman for Airbus, asked by The Bug Pit to confirm or deny the purchase, declined to comment.

This would seem to be the first major purchase of Western military equipment by Uzbekistan, who spent most of the last decade under U.S. and European sanctions because of its poor human rights record. In January, the U.S. announced that it was donating over 300 secondhand armored personnel carriers to Uzbekistan. And last year, Airbus seemed to be in the late stages of negotiations with Uzbekistan over military helicopters until Germany, which was the source of some of the subsystems of the aircraft, blocked the sale on human rights grounds.

It's also possible, however, that Uzbekistan is now buying Russian equipment as well. In December, Russian President Vladimir Putin visited Tashkent and announced that Russia was forgiving $1 billion of Uzbekistan's debt in order to free up credit for Russian arms purchases. Interfax reported that Uzbekistan's shopping list included "helicopters, armoured vehicles, air-defence weapons and small arms" from Russia. No news has emerged about that since then, but deals may be going on behind the scenes.

The C-295 is used to transport troops to remote locations, and can land and take off from unpaved runways. Kazakhstan has already bought four of the aircraft, with more a possibility.