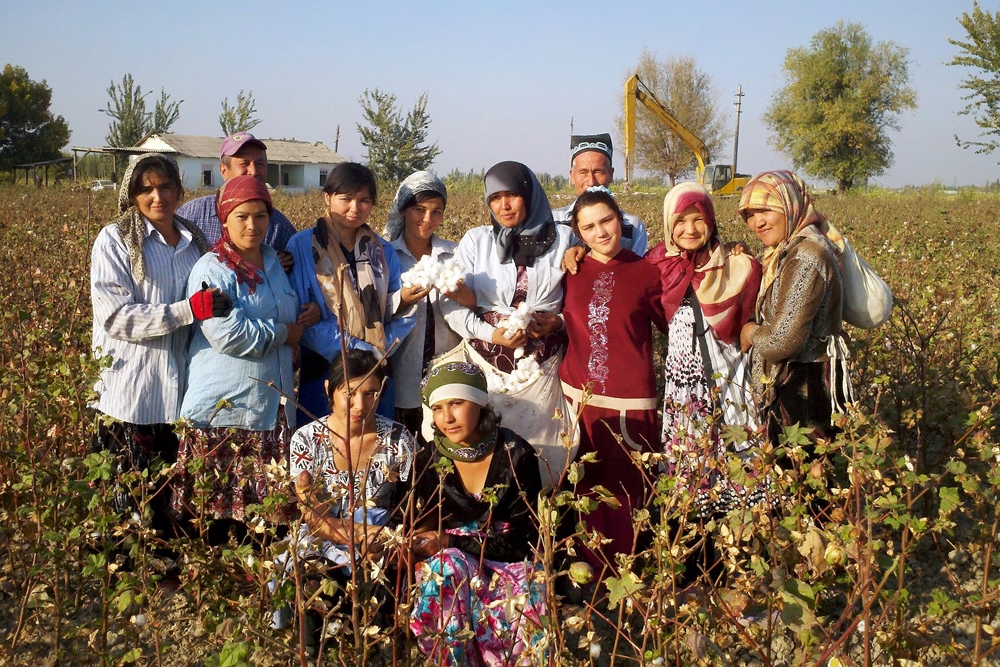 Uzbeks from a local community organization in the Antiqon district take a break from work in the cotton fields in September 2012. Every year, the Uzbek government forces teachers, doctors and other professionals to the cotton fields under threat of penalty, especially losing their jobs, according to reports by international organizations. (Photo: Uzbek-German Forum)

For the past week, Firuza has been waking at five in the morning to head out to the cotton fields. By that time, there are already dozens of people wading through the crops.

Half of them are, like Firuza, schoolteachers. The others are hospital and elementary school workers.

Firuza, whose name has been changed to avoid retribution for her speaking openly, teaches in a primary class at a school in the Ferghana region. She should be on holiday now that the summer break is in session, but the local district head ordered all government-paid workers to be available to pick bollworms off cotton plants.

Bollworms are a type of butterfly at larval stage that looks to the untrained eye like a regular garden caterpillar. They are the scourge of cotton-growers all around the world and, if left unchecked, can decimate crops. The variety found in Uzbekistan is yellow or green and can grow to around 5-6 centimeters. Each butterfly lays around 300 eggs. They attack not just the cotton buds but also the little sprouting shoots along the stem, which can put the plant out of commission indefinitely.

Firuza and her fellow workers pick the bollworms off by hand and put them into plastic bottles to make sure they do not crawl back onto the plants. By lunchtime, each worker is expected to have inspected three or four 100-meter lengths of crops. By midday, temperatures reach around 40 degrees Celsius (105 degrees Fahrenheit) and laborers have only scarves to keep the blistering sun off their heads.

“I got a call from the principal, and he told me that we needed to get into the fields,” Firuza told EurasiaNet.org. “This happens every year. I don’t see why we should do farmers’ work.”

Junior doctors from hospitals, polyclinics and dispensaries in the city of Kokand are also press-ganged into this painful, exhausting work. As well as removing the caterpillars, workers also have to deadhead the plants to allow for future blooming.

“We take off our white coats and become agronomists and crop sanitation workers. I don’t really know anything about the bollworms, but they make us pick them,” a midwife called Aziza told EurasiaNet.org. “Before lunch you can gather about 20 or 30 of them. But these bollworms are mostly active at night, so we’re here for nothing, just wasting time.”

There are no official numbers available, but anecdotal accounts suggest thousands of government workers in the Ferghana, Namangan and Andijan regions alone are sent out into the cotton fields for this pest-picking chore.

The Berlin-based Uzbek-German Forum for Human Rights estimated in a report published last August that around 500,000 people were forced to weed cotton fields over a five-month period last year.

According to a farmer in the Shakhrikhon district of Andijan region, the agriculture minister himself gave instructions that the caterpillars be picked by hand. Using pesticides can have adverse effects, such as giving rise to secondary pests and damaging the crops. In the West, growers try, when possible, to use what are known as cultural methods, which entail carefully choosing the best time and methods for irrigation, plowing and harvesting.

The bollworms began to appear this year in late July and have already ravaged multiple cotton fields, one farmer called Muhammadsodik told EurasiaNet.org. Rapid fluctuations in temperature can compound the problem.

Muhammadsodik said he has relented and bought insecticide that covers 15,000 square meters per liter diluted in water. Disinfesting his one square kilometer will cost him around $10 worth of pesticides, he said.

“I didn’t buy a very expensive pesticide. There are types that can cost farmers 500,000 sum ($83) per hectare (10,000 square meters). That is very expensive and can ruin a farmer,” Muhammadsodik said.

In any area where cotton grows in Uzbekistan, there are biological laboratories in the vicinity breeding wasps that feed on the bollworms. But farmers say these biological methods are ineffective and out-of-date.

In the end, only forced labor of teachers, doctors, students, houseworkers and the unemployed seems to do the job properly and affordably. The practice of coercing people into the cotton fields is notorious and commonplace during the harvest season.

International labor rights groups have noted some progress in recent years. They see less evidence that children are being used in cotton harvesting. But the worry now is that this has only shifted the burden onto adults.

“The organized recruitment of adults to pick cotton is widespread,” according to an International Labor Organization report from November 2015. “Organized recruitment of large numbers of people in such a short period of time carries certain risks linked to workers’ rights, which need further work, and certain indicators of forced labor have been observed.”

Government employees are invariably the most vulnerable, since refusal to go to the fields can result in immediate dismissal. Likewise, recalcitrant students face expulsion.

This method of coercion has earned Uzbekistan the ignominious honor of landing a top-five spot in the 2016 Global Slavery Index. In proportion to the size of its population, Uzbekistan has the second greatest number of “slave laborers” in the world per capita.

“According to NGO reports, regional production quotas are enforced by local authorities who achieve compliance through appeals to the national good, but also through threats related to the termination of employment, heavy fines, debt bondage, asset confiscation and police intimidation,” according to the report commissioned by the Australia-based Walk Free Foundation.